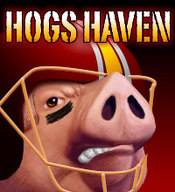 Time for the next Q&A in the NFC East preview series with all four SB Nation NFC East blogs. Part II are the answers from our good friend over at SB Nation's Redskins blog, Hogs Haven, and it's lead blogger, Skin Patrol. Enjoy.

Q: The NFC East is brutal in terms of the depth and quality of its teams. Can you think of another division that is even close in terms of talent and competitiveness?

HH: I absolutely think the NFC East is the toughest division in the NFC, and in the conversation for toughest in all of Football. However, if I had to pick another division in the sport that could legitimately claim that title, it would be the AFC South. They likewise produced 3 playoff teams in 2007 and were the only other division without a losing team. As a division, they also had one more win than the NFC East last year and their non-Conference record (13-3) was superior to ours (11-5) -- although their opponent, the NFC South, was probably inferior to ours, the AFC North. In any event, Indy has pretty clearly established itself as a perennial challenger for the AFC title, the Titans are allegedly having a strong training camp, or at least Vince Young is, the Jaguars have a really tough defense, and is on the brink of, shocking, being a good team. Does that push them above the NFC East? Maybe not, at least not in this partisan's opinion, but they are in the convo.

Q: Was the Giants Super Bowl victory a fluke?

HH: If by "fluke" you mean the better team lost, yea I'd call it a fluke. But the Giants found the greatest equalizer in football; an incredible front four pass rush. I think it's an impossible case to claim that, from top to bottom, the Giants were better than the Patriots over the course of the entire season and postseason. But what matters most in the NFL is how one plays in the last game of your postseason, and the Giants absolutely outplayed the Pats. It really is a huge credit to that they only lost by 3 given the Giants' incredible, miraculous drive in the final minutes of the game. They converted a 4th and 1, a 3rd and 5, and a 3rd and 11 against one of the better defenses in the league.

Fluke? Naw, when you load up on talent on the defensive line, you're going to have a good chance to win any every game you play.

Q: What new player on any of the teams -- draft pick, free agent or trade acquisition -- will make the biggest impact within the division this season?

HH: I'm reluctant to pick anyone on the Cowboys simply because their 2007 was such a success that it's hard to imagine any single player having that big of an impact on their season. I don't think they're going to win 16 games, or 14 for that matter, in 2008, so I can't exactly attribute much additional predictive success to Adam Jones for the Cowboys' next year since I think they'll be largely what they were in '07; the best team in the NFC. My gut tells me that Jason Taylor is the pick, but I'll go with Asante Samuels, because I think the Eagles have the most potential for improvement, given their .500 finish last year. They are the team that benefits the most from an additional win or two as that would be the difference between a postseason or an early exit, and Asante Samuels may very well represent that one or two win at some point this coming season. His 16 picks the last two seasons are extremely strong. If they're a top 5 defense in the regular season a) it will be in large part because of Samuels and b) they will make the playoffs.

Q: Your team will win the division, and possibly the Super Bowl, if ...

HH: Jason Campbell takes the next step as a quarterback. The defense is going to be fine; Greg Blache has history with these players and the personnel is competitively proven. The real question is how Jim Zorn's new West Coast Offense will play out, and that begins and ends at quarterback. If Jason Campbell can finish games -- he wasn't last year -- we should be at least capable of winning virtually any game we play.

Q: Your team will finish last in the division if ...

HH: Injuries would be the culprit. Like most teams, the Redskins are unsteady depth-wise at a few positions. 2006 was a great example of how a really top notch defense can turn into a total disaster just from a few injuries. While I have more confident in the defense (right now) than the offense, I think the defense is more susceptible to collapse from a few key losses in personnel. If we lose linebackers or any more defensive linemen, this could end up being a looooooong season for the Redskins. And when your opponents are the Eagles, Cowboys, and Giants, small missteps can be magnified dramatically over the course of the year. The margin between a playoff spot and none is paper thin every year. When 8-8 lands you at the bottom of the division, it's really not that difficult to finish last.

Q: What team in the NFC has the best shot at keeping an NFC East team out of the Super Bowl?

HH: Mancrush alert: I'm going with Drew Brees' Saints. Their offense has hummed with him and shows no signs of slowing down. Their defense was so horrid last year that I think they almost have to improve, if only due to a regression towards the mean. They had to play that incredibly tough AFC South last year (this year it's the AFC West I believe) and still managed 7 wins. I see them taking the music chairs NFC South division next year. I'd pick the Seahawks, but they are obviously a much weaker team without the greatest coach in the NFL: Jim Zorn. Yeehaw.

Q: Give me one player on your team everyone else might not know about, but who could wind up making a name for himself this season.

HH: It's a tough question with this roster, as I think most players have been pretty steady over the past few years. Reed Doughty is probably going to win that starting spot at safety and I'm not sure a lot of people know about him, but he was the starter for much of last year. I'll go with defensive end Chris Wilson. He went crazy at the end of last season, picking up two sacks in our last regular season win (against the Cowboys) and then another against in the postseason. With Phillip Daniels out, and even with Jason Taylor now on the roster, Chris Wilson will be leaned on as a rotation pass rusher. He was third on the team in sacks last year (2nd among linemen) and did that on limited reps. Guy has a niche.

Q: Rank the starting quarterbacks within the division.

HH: I do not think I will answer this question.

Q: Rank the coaches within the division.

I love Zorn so far but he is unproven so I don't think there is anything unfair about putting him last. Andy Reid has been the best coach in the division for a lot longer than any of the others and so I think he deserves the nod at at the top. Tom Coughlin is perennially on the "hot seat" which fascinates me since all he has done is... won. The past three seasons he's snuck into the playoffs in a very, very competitive division and just put the feather in his cap with the Super Bowl victory. The fact that he's ever on the hot seat says far more about the media than it does or has about his performance as a coach.

Wade Phillips won a lot of games last year but I feel like he did it with someone else's groceries, to steal a phrase from Bill Parcells. If he puts together a comparable 2008, and I have no reason to think he won't, his name could move up that list.

Q: Finally, what is your predicted order of finish in the NFC East? Why?

With the caveat that I think margins are razor thin in this division, and that I don't think the best team is really dramatically better than the worst team (in the way that Miami was inferior to the Patriots last year, for example). Cowboys are number one because they're the defending division champions by three games, which is a huge margin in the East and more than separated the 2nd from the 4th team last year. I believe they win at least 11 games in '08 and probably 12. Giants get the second spot not because I'm really all that convinced they finish 2nd, but rather because I think you have to give credit to a defending Super Bowl champion. They haven't finished at the bottom of the East in years.

I put the Redskins over the Eagles because I have to, as a partisan, believe that the Redskins are not the odd-man-out that misses the postseason. Someone has to fill the bottom and I'm uncomfortable listing either the Cowboys and Giants for the reasons above, and the Redskins for other unstated obvious reasons. Sorry Eagles fans (but really I'm not).