Share All sharing options for: BTB book review: Boys Will Be Boys 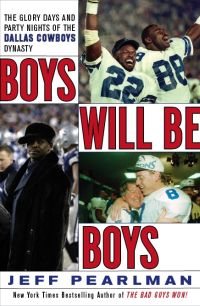 Over a year ago, when author Jeff Pearlman sent me a note about his newest book project, Boys Will Be Boys, I wondered how it would play in the land of Cowboys. Pearlman was writing a book about the 90s Dallas Cowboys, and it surely wasn't going to be all about the winning times on the field. When discussing those heady days and wild times, Cowboys fans can become very provincial. We can talk about the behind-the-scenes carnival of moral depravity that was going on, but if an outsider starts with the Michael Irvin was a coke-head stuff, we can become pretty defensive. If the chatter continues, we can become downright belligerent. So a whole book dedicated to it, especially after most Cowboys fans have made peace with all that stuff, was surely going to be poking a hornet's nest with big stick.

After having the read book over the past week, I can assure you as a Cowboys fan, you'll want to read this juicy tome. Sure, it reinforces what we all knew; the Cowboys were more akin to a superstar rock group than anything else. The drinking, the drugs, the women - while most of them were cheating on their wives - this was Led Zeppelin on tour. Sure, just like Zep, when it came to what they were getting paid for, there was no one better. And when it came to all the perks from those professions, there was no one worse.

Here's my caveat, if you're still mad about Peter Gent's book North Dallas Forty then this might not be the book for you. And that was a work of fiction. If you hold the Dallas Cowboys in such a lofty place that any criticisms or revelations of failure make you want to break furniture, best you stay away. No one is spared in this book. Emmitt Smith takes a few lumps, Deion Sanders is portrayed as a prime divider of the locker room, Jerry Jones' and Jimmy Johnson's faults are magnified. And Charles Haley, I don't even know what to say about that. With everything else I read in this book, the detailed behavior of Haley at Valley Ranch stands out as something so bizarre, even I was stunned and that's not easy.

Click the link below to continue reading the review.

For those of you who lived in the metroplex during those dynasty seasons, many of the stories you probably knew about. But even you will surely be surprised and entertained by some of the stuff Pearlman has dug up. For those of us who were fans but were not privy to the Dallas-area newspapers during the era - remember, this was pre-Internet coverage  - this book fills in a lot of the gaps in knowledge.

Besides, how can you go wrong with a book that has stuff like Larry Brown commenting on in-game action about Nate Newton - "I was like, ‘Did a damn candy bar just fly from Nate's body or am I imagining things?'"  Seriously, a Snickers bar popped out of Nate's uniform in the middle of a pass block. Or how about three-and-a-half pages dedicated to the Asthma Field. Yes, we learn that free-agent kicker Massimo Manca was the guy who was responsible for Johnson's tirade and the way everybody remembers it has turned it into a legend - whether true or not. Pearlman also uses Michael Irvin's ScissorsGate episode to open the proceedings and circles all the way around back to it at the end to show the decline of the once-proud dynasty. In the process, he details exactly what happened during that hitherto secretive moment. There are plenty of uplifting moments too, like Larry Brown overcoming a tragic story and winning the MVP trophy at the Super Bowl, Troy Aikman pulling a Babe Ruth and scoring a TD for a dying child and lots of highlights from the Super Bowl victories. Also, there are plenty of laugh-out-loud moments and the book is a page-turner that is a very easy read.

Look, if you want a book that just talks about our heroes without any of their faults, skip this book. But if you want to re-live the era truthfully, with all the outrageousness that was the Cowboys of the 90s and get plenty of behind the scenes action and honest commentary from former Cowboys players, this book is well worth the read. I thoroughly enjoyed it, even when I was cringing in horror or contemplating how much more those teams could have accomplished if they hadn't self-destructed.

The book has so many stories and revelations that I can't even begin to run through them all in this review. But I'll leave this quote from Nate Newton as a summary of that era. The Cowboys were about to play the Pittsburgh Steelers in Arizona, their third Super Bowl in four years, and as we all know, they would win it to cement their status as the team of the 90s. But they were the team of the 90s off the field too, because they partied as hard as they played football. So when the Arizona police talked to the Cowboys the week before the game, Newton gives us this proclamation - "The police came in and gave us a list of places not to go," Newton said. "I wrote ‘em all down and went there."

That says it all.