Last year we went through and listed the top ten most memorable moments of the 2007 season. After a 13-3 season and many incredible plays the tough part was figuring out in what order they should be. This year I sat down with the same task: come up with a list of the top ten great moments of 2008. The problem was that there weren't that many. It was a dissapointing year that ended on a very sour note, and a lot of us have spent the past few weeks trying to decipher what went wrong. So we have decided to come up with a different sort of list: the top moments of 2008 that shaped the season into what it was, both good....and bad. 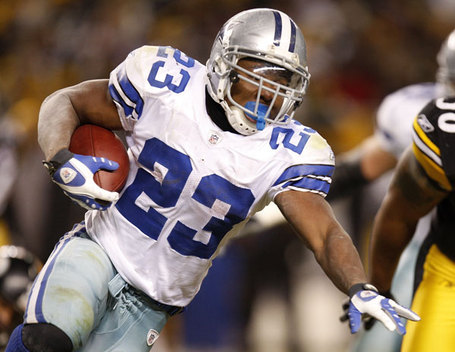 It was a daunting task:  Face the number one defense in the league on the road, in hostile conditions and brutal weather, without your team's top two running backs. This was the scenario the Dallas Cowboys were facing leading up to the game against the Pittsburgh Steelers. The Cowboys were seemingly back on track having won4 of its last 5 games and after seeing the season come close to slipping away they were back in the hunt with an 8-4 record.

Unfortunately the Pittsburgh Steelers' defense, led by eventual Defensive Player of the Year James Harrison, stood in their way. They were an intensely brutal, hard hitting and disciplined machine whom no teams had completely conquered. The defense had yet to allow over 300 yards of total offense and was especially tough against the run, allowing just 3.1 yards per rushing attempt.

The Cowboys last remaining running back: Tashard Choice, a rookie out of Georgia Tech who had seen limited snaps most of the season. The media and fans alike were anxious for Choice to get more carries before the Pittsburgh game yet coaches were reluctant to put too heavy a strain on the rookie. Yet when Marion Barber was injured during the game against Seattle, Choice stepped in and immediately set the tone for his play averaging 5.7 yards a carry in the second half.

Yet the difference between the Steelers' defense and Seattle's was astronomical, and a major question going into the game was just how effective Choice would be. There was no doubt that he would see a significant amount of carries: the weather was cold and very windy and the only way to beat an aggressive defense is to keep it honest and away from your quarterback. Could Tashard Choice step up and make the big plays when it mattered?

Unequivocally, yes. Tashard Choice finished the game with 166 yards from scrimmage, the most the Steelers' defense allowed all season. Additionally, he also gained 88 yards on the ground, the most against Pittsburgh until the final week of the season. Choice's vision, quick feet and fast decision making made the defense pay for being over aggressive at times. Defenders would pursue down the line and Choice would cut back just a bit, seeming to find the little extra room that not many running backs had seen all season.

Choice also proved a weapon in the passing game and became a sure handed check down for Tony Romo. On one of the game's biggest plays Choice took a short pass 50 yards, sidestepping defenders and coming close to breaking it for a long touchdown.

Perhaps the biggest question about Choice wasn't his running and catching ability, but how he would handle a complex and aggressive blitzing defense. For the most part he impressed, and on one play sent James Harrison flying through the air as he attempted to avoid a block, giving Romo enough time to complete a pass.

Unfortunately, the Cowboys were unable to hold onto the lead and lost 20-13. Yet one of the positives took away from the game was knowing just how good their third running back was. Choice was a major factor in every remaining game of the season, totaling 472 yards in a little over four games and averaging 5 yards a carry.  He proved a patient receiver and effective on screen passes, and always showed the drive to never lose a yard.

The play of Tashard Choice against the Steelers opened up the eyes of the team, the fans and the rest of the NFL that the Cowboys have a very capable running back just itching for playing time. The Cowboys go into 2009 with three brilliant and outstanding running backs, and when healthy, there is no reason they shouldn't have one of the top running games in the NFL. That all became apparent on a painfully cold night in Pittsburgh, against the best defense in the league.

You can find highlights of Tashard Choice's game against Pittsburgh here at NFL.com