BTB Talks With DeMarcus Ware After Signing His New Deal

Share All sharing options for: BTB Talks With DeMarcus Ware After Signing His New Deal

DeMarcus Ware's freshly-minted deal with the Cowboys did not pay him the reported figure of $78 million, Blogging The Boys has learned after speaking with the All-Pro pass-rusher.

The actual total given him by Jerry Jones is $78,000,001 - and we have the photographic evidence of that extra dollar.

"I've got it right here in my pocket,'' Ware told me late Monday night, reaching for an autographed buck that is suitable for framing.

That story - and a bushel of other vignettes - from Part 1 of my one-on-one visit with DeMarcus Ware:

JERRY'S DOLLAR: The Cowboys owner approached Ware on Monday after the new contract extension was finalized. It's a six-year, $78 million deal that guarantees him at least $40 million, running through the 2015 season, and making him the highest-paid Cowboy ever.

On the dollar, Jones had written:

"THIS IS MY LAST OFFER. YOUR [sic] GREAT. JERRY JONES''

I GOT A FEELING: DeMarcus told me that a song was running through his head all weekend long.

Of course he had a feeling. He knew Sunday morning, during pregame stretching at Cowboys Stadium before the kickoff against the Falcons, that he and agent Pat Dye Jr. had reached a handshake agreement.

"Congratulations,'' Jerry told him, shaking hands with Ware on the field. "You are a wealthy man.''

The Jerry/Ware exchanges had been going on for weeks leading up to a deal both sides knew was coming. Said Ware: "Jerry's big joke was to walk down the (Valley Ranch) hallways and do this.''

And then Ware pulled the linings of his pockets inside-out and shrugged with palms-up, the international sign for "I'm broke.''

WARE AND THOSE BLACK-EYED PEAS: So is "I Got A Feeling'' by the Black-Eyed Peas actually appropriate? Ware had to give me a few lyrics:

Well, no. I saw no sign of DeMarcus "getting crunk.'' (Not that I would know that if I saw it.) Dye was around, and so was Ware's lovely bride, Taniqua. She was beaming, maybe because she's holding the purse strings here.

At one point, Ware reached for his wallet and it wasn't in his pocket.

That fits with what he said when he called his wife with the news earlier in the day.

NOT FAT AND SASSY: There are players who, with the money in their pocket, might tend to relax a bit. That is apparently not Ware's style. After being told of his coming new deal, he was pivotal in the victory over the Falcons, recording a forced fumble and two sacks. The 27-year-old Ware, who was in the final season of the contract he signed after being the 11th overall pick in the 2005 draft, now has 57.5 sacks while starting all 70 of his regular-season games.

"I think it would be a mistake to think, ‘Oh, I've got it made now,''' he told me. "I think now is when the work really begins. There's kind of a legacy that goes with this kind of contract, you know?''

BIG PLANS FOR THE BIG MONEY: So what are DeMarcus' big plans with the big money?

He might want to start with a new watch.

The Fossil he was wearing had a huge face, so it was sorta stylish. I asked him how much he'd spent on it.

So yeah. DeMarcus Ware needs to buy a new watch. 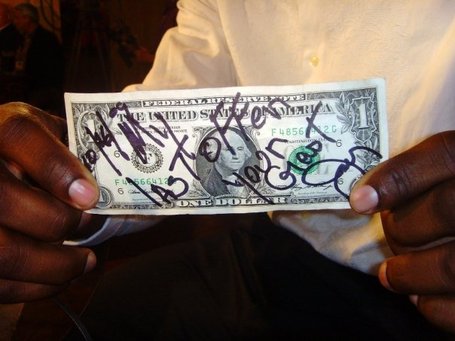 I'll have more details in Blogging The Boys' upcoming Part 2 of my one-on-one visit with DeMarcus Ware.