A collection of notes and one offs while we wait for the weekend:

The Cowboys were an awful screen team in recent years, a big letdown since they excelled at this play during Tom Landry's reign.  Jason Garrett has not gotten much credit for returning the screen to the Cowboys arsenal.  He didn't run it as much as he could have last year, but screens to backs and tight ends worked very, very well. 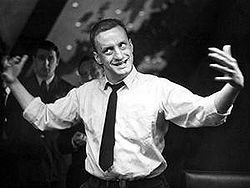 "You should see that big Flozell out in space. Whoo-boy!"

This year, Garrett has introduced the bubble screen to the repertoire.  If you recorded the Eagles game, watch the first throw to Kevin Ogletree.  You'll see Andre Gurode and Flozell Adams sprint into the right flat and sustain their blocks.  Gurode drops one Eagle around the ten.  Adams was perhaps more impressive, getting from left tackle to the right sideline, where he locked on an Eagles secondary player and kept pushing until the whistle.

You don't think of Flozell as an effective puller or screen leader, but a source told me a long time ago, "you should see that big sucker when he gets out in space. He's hard to get around."  Indeed.

Have you noticed how many reps third tight end John Phillips is getting lately?  That's because he's blocking like a baby moose.  The Cowboys like using their 22 package a lot, where they have two backs and two tight ends.  They're calling the 13, a one back, three TE set more because Phillips is blocking as well or perhaps better than Deon Anderson right now leading the back into the hole.  Watch Dallas' first TD drive and you'll see Phillips plant a linebacker on his back on one run and peel back and blast another linebacker who's trying to catch Marion Barber after a reception.  More dirty work from the down roster guys.  Keep it up, John.

The Cowboys have flopped Demarcus Ware and Anthony Spencer all year, to keep Spencer on the strong side as much as possible and Ware on the weakside of formations.  That's because the Cowboys are rushing four men more often than they used to, and they want Ware rushing and Spencer covering in those situations.

In the 2nd quarter, the Eagles faced a 3rd and long and Wade Phillips teased with a rush package I don't think he's employed before.  He had Ware floating in the middle of the field, before he stacked behind NT Jay Ratliff at the snap.  Ratliff went one way and Ware went the other.  Donovan McNabb got his pass away and the set went back into mothballs.

I wonder if we'll see Ware picking his spots in the middle of the field this week?  There's no better opponent for this experiment than the struggling Packers line.

Because Sometimes We're Right Around Here

If you watched the Bears/49ers tilt last night you saw Jay Cutler continue his pick parade.  Cutler served up five more picks, raising his total to 17.  (He even threw one to the 49ers nose tackle.)

You'll recall that back in March, when Josh McDaniel was falling out with Cutler, the Cowboys were briefly, but intensely, mentioned as a suitor.  We warned you then that for all of Tony Romo's foibles, he was still a more disciplined QB than Cutler:

Stop the myopia.  You may hate Romo's gunslinging ways, but trading him for the biggest gunslinger of them all won't solve any problems.  It's simply creating change for its own sake and hoping for something better.  Hope, as the military folks are fond of saying, is not a plan.

What Did They Miss in April?

Long-time blogger Quincyyyyy has his attention on the college kiddies and prospective '10 draftees.  (Check out his post and poll in the right hand column.)  I'd advise draftniks to focus on the spots the Cowboys left unfilled this past April.  Here's my list:

Free Safety:.  The Cowboys loved, loved, loved Louis Delmas, but he rose too far up the draft boards to be a serious prospect on day one.  Alan Ball has emerged as a backup for Ken Hamlin, but he's not challenging for a spot.  If a top centerfielder is available in the early rounds when Dallas comes up, they could take him.  Hamlin has been hot and cold in his Cowboys career, as he was in Seattle.

Offensive Line:  The scouting department has a saying: "we don't draft players to be backups."  The organization will give a prospect time to develop, but by year two or year three at the latest, they expect that prospect to challenge for a starting spot.

What OL backups live up to this standard?  None that I see.  Pat McQuistan is in year four and Marc Colombo is safe.  Cory Proctor showed last year that he's not starter material.  Duke Preston and Montrae Holland are place holders. Doug Free might have what it takes, but I doubt the Cowboys know for sure and he's deep into year three.

The Cowboys liked the top tier of centers last year and was deeply disappointed when Seattle traded in one spot ahead of them and swiped Oregon's Max Unger.  Center remains a need.  I'd add OT to this list, unless Free shows something exciting in the next eight games.  Guard depends on Robert Brewster's rehab.  He made a good impression in the mini-camps, but missed all of training camp after surgery.

Defensive Line:  Several 34 DEs were on Dallas' radar in the 2nd and 3rd rounds.  They need another NT.  Junior Siavii has been solid, but is he a long-term answer?  Marcus Spears is in his contract year, as is Stephen Bowen.  The line has been a strength this year but the position can go to seed in a hurry if it is taken for granted.