Vote Emmitt, "Too Tall", and Haley for the HOF

Share All sharing options for: Vote Emmitt, "Too Tall", and Haley for the HOF

This is a sponsored post by JC Penney/Van Heusen

It's Round Two... time to vote on the 25 Hall Of Fame semifinalists at fanschoice.com!

In October, we ran the first piece of our campaign to get BTBers and Cowboys fans to vote for Emmitt Smith. At that time, he trailed Jerry Rice for the #1 spot. Now, he and Raiders' punter, Ray Guy, are neck and neck for #2. A punter for crying out loud! Rice is one thing, but Emmitt can't lose out to a punter!

He needs our votes.

Make the jump for more details.

For just one more month, you can vote everyday at fanschoice.com. When voting, you can also enter in the sweepstakes to attend the induction ceremony. Voting ends January 7, 2010.

And when you vote for Emmitt, be sure to also drag the other two Cowboys, Ed "Too Tall" Jones and Charles Haley, onto your ballot. These two great defensive ends have made it into the semifinals!

"Too Tall" played his entire 15-year career with the Cowboys and is currently at #20 on the Fan's Choice list. He looks to be comfortably ahead of John Randle, and could move up past Joe Theismann with just over 100 more votes. 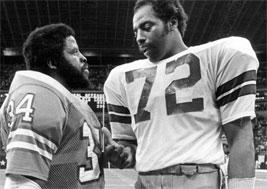 Haley won five SuperBowl rings, three coming with the Dallas Cowboys. How many HOF players have five rings? None. Currently, he's sitting at #14 between Richard Dent and Randall Cunningham. 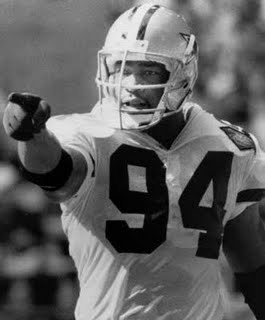 Blogging The Boys and SB Nation have teamed up with Van Heusen/JCPenney and the Pro Football Hall of Fame to promote the first ever HOF fan vote. Although the Hall's official board of selectors will have the final say, our votes will be heard with the results being announced live on the NFL Network.

With the holidays upon us, time will fly so vote for your Dallas Cowboys!

While we're at it, Sam Hurd could also use our help in making it to the Pro Bowl as a special teamer. He's in on every unit - if it's not Pat Watkins making the tackle, it's Hurd. He's second on the team in ST tackles and doesn't even play one of the gunner spots; he makes his tackles from the fullback position.

Currently, he is second only to the Vikings' Heath Farwell in votes. It sure would be nice to see another helmet with a star on it in Hawaii.