OK, so I'm no technician for the crime lab. And I don't claim to be an expert in handwriting (just ask my wife). But peering into the deep crevace that is all of the he-said, she-said of whether Lucille Hester is truly the sister, half-sister or play-sister [sic] of Bob Hayes, I start to feel like I'm watching a cross between episodes of CSI and The Rocky and Bullwinkle Show.

So let's look at something that cannot, or at least would be difficult to, lie - the autograph. This could let me know whether what was read truly came from Bob Hayes.

The good folks over at DallasBasketball.com have continually harped on one piece of evidence, and that is the differences between the autograph on Bob Hayes' player card and the Hayes autograph on the letter that Hester read after the announcement of his induction into the Pro Football Hall of Fame. 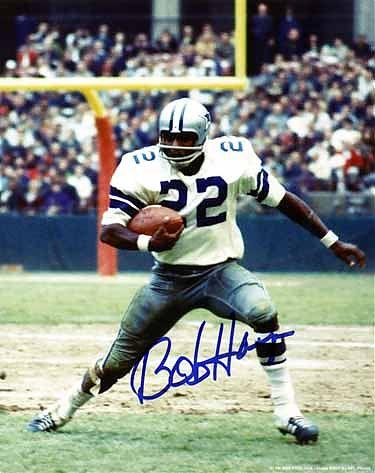 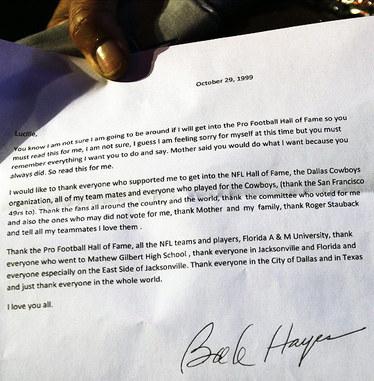 So I decided to take a closer look. Again, I'm no expert but some differences are clearly obvious. 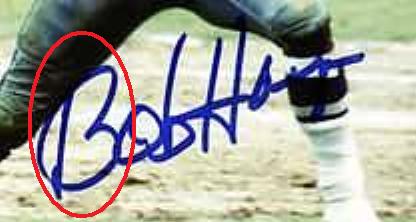 The card "B" is more round. It also has a hesitation at the bottom of the vertical line indicating that the line is made with a down stroke. There is a distinct loop to the left of the vertical line and has a continuation at the bottom of the "B" loop that continues to the left of that line, indicating that the next letter was started after the pen was lifted. i.e., not continuous.

The letter "B" starts at the base and is made in an upward stroke. It is more rounded than vertical. The loop at the bottom of the "B" does not continue to the left of the vertical line but instead loops over itself to begin the next letter in a continuous fashion. 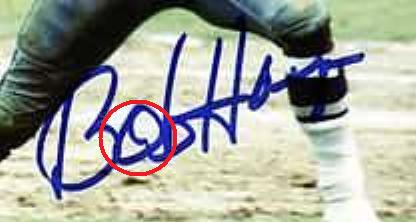 Again, the card "o" is rounder and, as stated above, appears to have been started with a different stroke than the capital letter. Also note that the final stroke of the letter that crosses over the "circle" of the letter is made at the 11 o'clock position, or left of top center.

The letter "o" is more slanted to the right and not as round. The final stroke of this letter crosses over at the 1 o'clock position, or right of top center. 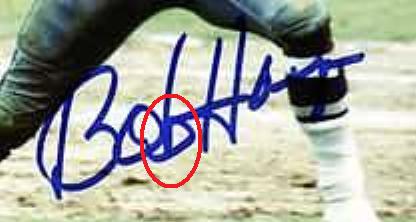 The card "b" again is round. Its final stroke at the bottom of the letter continues back behind the vertical line, indicating that the end of the letter was made in a downward and back to the right (clockwise) stroke.

The letter "b" has a more slanted vertical, much like the capital "B". The ending stroke of this letter, instead of continuing past the vertical line, loops up, indicating the end of the letter was made in an upward loop stroke, or counter-clockwise. 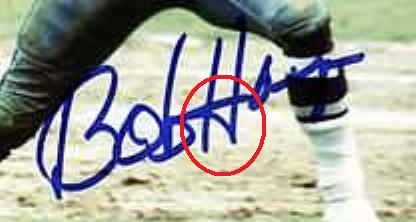 The card "H" has vertical lines similar to the Capital "B". The distinction here is that the crossing line on the "H" is made as a continuous stroke after the right vertical line.

The letter "H" has straight vertical lines, unlike the capital "B". The more distinctive mark here, however, is the absence of the continuation for the horizontal line across the verticals. 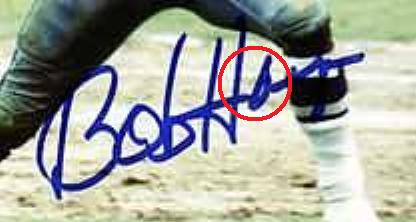 The card "a" is started at the top on a separate stroke from the capital H. You can clear see where the pen was lifted after the "H" and started again with the "a".

The letter "a" is clearly a continuation of the capital "H".

I won't continue with the rest of the signature because the latter part of the card signature becomes more difficult to view as it is over the blue and white of the socks. But looking at the first five out of five letters, I have serious questions as to whether the two signatures are from the same person.

I say again - I am not a handwriting expert. But I would hope that this exercise would prompt more noteworthy professionals in that line of work to examine these documents. With all of the reporting that has gone back and forth since his induction announcement, his legacy deserves to have this episode settled.

As a fan, I want to know that the words I was told came from Bob Hayes truly came from the man. If not, I would feel cheated.