Cowboys Passing Game: Who Wants to Tango with Romo?

Share All sharing options for: Cowboys Passing Game: Who Wants to Tango with Romo?

What links some of the signature catches in Dallas Cowboys history?

What do the Hail Mary pass in '75, the Aikman-to-Harper bomb in the '92 NFC title game, Preston Pearson's leaper in the right corner of the L.A. Coliseum again the Rams in '75 have in common?

They were all lousy passes, either overthrown or underthrown.  They live on because a Cowboys receiver made an improbable catch.

I've been thinking about this topic a bit recently.  Roger Staubach and Troy Aikman were all-timers, but they received great assistance from receivers who made their weaker throws nearly as automatic as their good ones.  Think of Drew Pearson and a list of tough catches in traffic come to mind.  Same with Preston Pearson, who could stretch for a tough catch.  Michael Irvin's long career produced a litany of acrobatic grabs which required uncommon body control and concentration.

Perhaps no Cowboys receiver made more big grabs by percentage than Alvin Harper.  He tends to fade with time, in relation to the Triplets, or Jay Novacek, but think of the '90s Cowboys playoff runs and more big plays had number 80 involved that most people suspect.  I can see him taking a sure interception off Eric Davis' facemask to set up Dallas opening touchdonw of the second half at Candlestick.  I can see him leaping high to grab a playoff touchdown against Green Bay, and landing on his head. Several others line jaw droppers immediately up behind these two.

I then think of the current crop of Cowboys wideouts and wonder where the big plays are?  Where are the acrobatics?  The velcro hands?  The knack for making the improbable on a regular basis?

Think of the brief Romo era, all two and a half years of it.  Can you recall a big drive sustained by a crazy catch?  I can think of some lucky ones, of a Romo pass that bounced off Miles Austin's hands and into Patrick Crayton's to seal the Bengals win last year.

I can think of some "wow" inspiring Jason Witten catches, where he made tough snags while being drilled.  When it comes to the wideouts, I have to think long and hard before anything comes to mind.

And that's a problem.  Tony Romo makes his share of big mistakes, but he also makes a lot of Houdini-like escapes which lead to big plays.  His bomb-on-the-run at the Meadowlands in '06, which landed perfectly in Witten's hands.  His double spinner scramble at Pittsburgh last year, which led to his lone TD pass to T.O. along the back line.

Where, however, is the receiving corps' "wow"?  T.O. made a lot of catches, but how many were extraordinary?  Where's Miles Austin's portfolio?  Sam Hurd's? Patrick Crayton's?

It takes two to tango.  The quarterback has some wow, but Roy Williams will need to bring some of that circus mojo he displayed at Texas and sometimes at Detroit if this team wants to be great.  So will his kiddie corps of colleagues.  We need to see some sliders.  Some one handers.  Some of this: 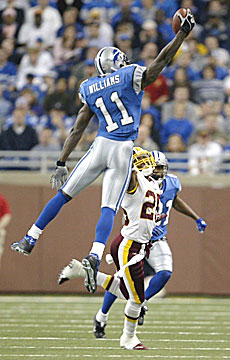 Because without these plays, this offense could be good, but not great. Ask Eli Manning about this.  He made an all-time great escape from a Patriots rush late in New York's Super Bowl win, but he would be a footnote in the Tom Brady Story if David Tyree had not made an equally improbable catch.

It takes two to tango, gents.  Who wants to dance?