Share All sharing options for: The Anonymous Dallas Cowboy

Can we get some love for a guy who we always forget about? This player has been on the team since 2005 and is an integral part of every game. He does his job so well, almost to perfection, that we never even notice him. In fact, I've seen 53-man roster predictions that leave him off. It's not that hard to do since we almost never talk about him.

You got the player's identity figured out yet?

Make the jump for this unheralded star. 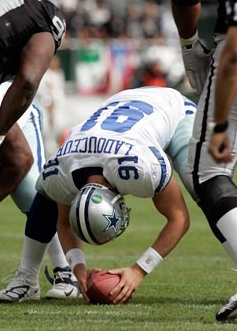 Most of you, I'm sure, got it; but it is amazing how anonymous L.P. Ladouceur is, even among Cowboys fans. Has this guy ever had a bad snap? I couldn't think of one, although somewhere along the way he must have. But that's just a testament to how close to perfection L.P. has been for the Cowboys since he joined in the 2005 season.

Who is L.P. Ladouceur?

Louis-Philippe Ladouceur (born March 13, 1981 in Montreal, Quebec, Canada) is a Canadian-born American football player. He played college football for the California Golden Bears, where he was a career backup defensive lineman (2000-2004) as well as their regular long snapper. In 2005, he went undrafted, and signed with the Dallas Cowboys as their long snapper.

After a brief stop with the Saints, he signed with the Cowboys.

Even on one of the most famous infamous plays in Cowboys recent history, the famed Bobble in Seattle, his aim was true.

Over at the mothership on his bio, they say this:

He has made clean snaps on 196 punts, 86 field goals, and 122 PATs in his career, including the playoffs.

I don't know, but that sounds like they're saying he's never had a bad snap. They don't say clean snaps on 196 out of 199 punts. Or 86 out of 87 field goals. Whatever, let's not quibble on details, but thank our lucky stars we have a long snapper who is as good as they come.

I did find one reference to a botched punt, but McBriar was to blame, because he said L.P. is too perfect. From a 2006 game:

The Cowboys' affable Australian, Mat McBriar, talked about the hit he took from Eagles linebacker Matt McCoy at the Cowboys' 17-yard line early in the first quarter. After letting the snap go through his hands, McBriar pounced on the ball.

He then sort of propped himself up before the hit, something he'll hopefully never try again. He blamed the drop on deep snapper L.P. Ladouceur's perfection.

"I'm used to him being so perfect that when it came in a little bit high, I was caught off guard," he said. "At some point, it sort of becomes second nature."

But, like any good Cowboys "star" L.P. is not afraid to stir up controversy. From last year's training camp, the day after the minor earthquake hit:

[Folk] and deep snapper L.P. Ladouceur were actually at the beach when the earthquake struck, which is troubling on several levels. I don't recall specialists spending mornings at the beach under Bill Parcells, but I certainly don't have anything against it.

It's Romo in Cabo! How could the rest of the press have never picked up on this controversy! Damn anonymity, costing Ladouceur his chance at tabloid gold. He needs a publicity agent - they could have stirred this up big time and L.P. could have got his shot at an ESPN segment. Hey, I'm just trying to get L.P. some press.

Let's give up some love for L.P. Ladouceur.