Dallas Cowboys 2009 Training Camp: We Got It Covered

Share All sharing options for: Dallas Cowboys 2009 Training Camp: We Got It Covered 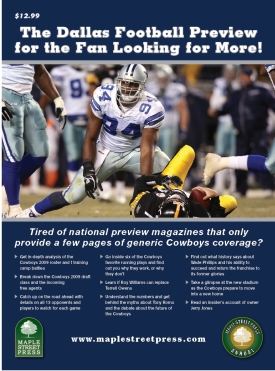 There's still time to order the MSP Cowboys Annual. Click the pic for the order form.

I know it's really happening now. Training camp is almost upon us, a fact driven home by my preparations to fly to San Antonio tomorrow (Tuesday). Yup, I'll be hopping a plane to SA for TC and will be spending a week there, leaving on Monday, the 3rd, after practice. During that time, I'll be attending every practice and will post the detailed reports shortly thereafter, roughly within an hour of the end of practice. I'll also be doing some local radio spots talking about camp, about the magazine, and about the blog. I'll try to post notice of the shows beforehand. Like the one I'm doing tomorrow morning (July 28th) at 7:30 CST on KTKR - 760 AM, The Ticket, in San Antonio. I'll be on the morning show with Andy Everett and Peter Burns. Tune in if you're up that early!

Following that, Rafael will be coming down the next week and will cover camp for BTB for another week. That's two weeks of straight coverage from this blog. Raf may also be doing some radio spots.

And to top it off, Aaron is local to SA, so he'll be popping in and out of practices and helping us cover it all. Heck, by the third week of TC, Aaron will be an old pro and can carry on our coverage almost until the very end of camp.

There's a lot more after the jump.

This blog applied for media credentials from the Dallas Cowboys for training camp, but was turned down again, as expected. The Cowboys as an organization are not ready to embrace "new media" and only credentialed websites that are owned by TV, newspapers, radio, magazines or other major media conglomerates. We poor independent sites are shut out by the policy of the Cowboys. Not much I can do about that, except hope that the Cowboys will one day embrace their fans, instead of shutting them out. Other NFL teams have already made the leap as several of my SB Nation blogging brethren have obtained credentials for parts of camp.

Not having credentials won't stop us from covering camp. We can see the practices for ourselves, so we can give our own first-hand accounts instead of interpreting what the players, coaches, and media tell us happened at each practice. I usually watch practices from higher up in the stands, near the press box, because it's easier to see the whole field and you can get a nice view of plays unfolding. It lacks the intimacy you get out at Oxnard, but it's always a comfortable, unobstructed view. For those wanting to get closer to the players, the rows at the bottom are the best bet, and because it's a practice, you can hear a lot of what's going on from the coach's instructions. If you get a VIP pass, you can get even closer by standing in a boxed off area along the sideline.

Unfortunately for me, this camp coincides with a major project I'm working on (yes, Raf and I have to make a living outside of the blog) which might limit my social time while in SA. Camp is good, but putting food on the table and paying the mortgage tend to be priority items. Anyway, I'll try to get out some for sure.

Speaking of making some money outside of the blog, Raf and I want to thank everybody who has bought the MSP Cowboys Annual so far. I hope you guys are enjoying the read, Raf and I spent a lot of time on it during the offseason. If you haven't bought the mag yet, what are you waiting for? Go here, or if you are local in Texas, you can find it at convenience stores, newsstands, almost anywhere you can buy sports magazines.

In fact, Aaron found it at a local HEB grocery store and sent me this pic: 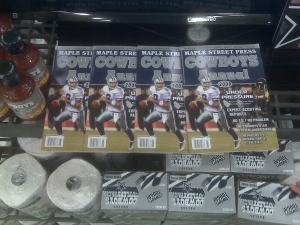 Just as a little more enticement, here's what a sample page looks like: 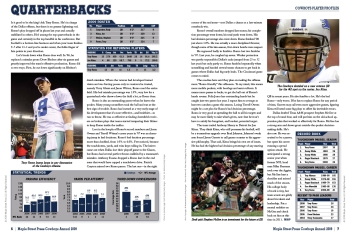 Granted, you can't see the details on that scaled-down pic, but it shows that the magazine has nice color photos and graphics, contains charts and graphs and...well, just go buy it, I'm sure you'll enjoy it. In fact, a couple of BTBers let me know they're enjoying it.

Got mine today ... airlifted all they way to Germany. Outstanding read.

Got mine yesterday...and it's outstanding. Best team guide I've ever read- every article is salient, interesting, and goes beyond the typical boilerplate season previews...plus it's all Cowboys.

Training camp is almost here and BTB will have it covered!