Cowboys Magazine: A Look at the Running Game by KC Joyner

Share All sharing options for: Cowboys Magazine: A Look at the Running Game by KC Joyner

[Ed Note]: BTB will be running a series of posts over the next few weeks highlighting some of the articles in the new magazine Maple Street Press Cowboys Annual. You can pre-order the magazine for delivery by visiting the Maple Street Press website. We appreciate any orders, you'll be supporting Rafael and I along with BTB. So go pre-order now.

Today's feature article is by KC Joyner entitled: Six Innovative Plays: Breaking Down the Cowboys Running Game. I'll let KC do the set-up for the article and tell you more about it.

[KC Joyner]: One of the writing mountains I climb every year is putting together my annual Scientific Football book.  This tome takes a detailed metric and scouting eye look at every team in the league and that task typically requires 2,000-3,000 words per franchise.

Even with that level of verbiage volume, there are still times where I am not able to pen everything I want to about a club.  It was with that thought in mind that I gladly accepted an assignment from Maple Street Press to contribute to their Cowboys annual.  Dave Halprin, webmaster extraordinaire for Blogging The Boys and editor of the MSP Cowboys magazine, asked if I could take on the challenge of putting together over 8,000 words in a series of metric-based articles.

I was more than happy to take on the venture because Dallas is one of those teams whose talent level and performance level don't always equal one another.  I wanted to go as deep as I could into the performance metrics and scouting notes to try to get a better feel for which players were truly meeting expectations and which weren't.  That was the central theme in the offensive and defensive articles in the mag.

I also wanted to take a closer look at Jason Garrett's playcalling to see if he really deserved the level of grief he was taking for the state of the Cowboys offense.  I did this by taking a closer look at the Boys rushing attack, or more specifically their creative use of the counter play, an excerpt of which is posted below.

I would also like to the opportunity to invite you to take a look at my series of Scientific Football articles on the New York Times Fifth Down blog.  I use these to take a look at every team in the league and will be posting one about the Cowboys running backs on Monday, July 6.

Make the jump below for the good stuff. 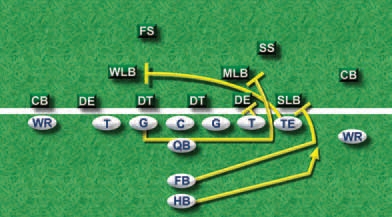 [Excerpt from the actual magazine article]:

Let's start with the most basic bread-and-butter power running play, the counter. Dallas ran some variant of this play 93 times last season, making it easily their #1 rushing choice. The Cowboys typically use the counter play to attack the left flank of the opposing defense, as fifty-eight of those ninety-three counter-style runs were directed towards the right side of the Boys offense.

A good example of how to properly execute this play occurred in week 17 game against the Eagles in week 17.  Dallas used an I-right formation with a pro set (two running backs, two wide receivers, one tight end on the right side of the offensive line) against the Eagles standard 4-3 front. The conceptual idea behind the play is that the offense is partially selling a run to one side of the field and then sending the ballcarrier to the other. The subterfuge is a temporary ruse designed to get the linebackers to take a step in the wrong direction, thus giving the point of attack blockers the initiative and a slight time advantage on their blocks.

Its success revolves around four blocking areas. The first three are the triangle of the left defensive end/strongside linebacker/middle linebacker. These three are the point of attack impediments and must be moved out of the way for the ballcarrier to gain yards.

A triumvirate of blockers has the responsibility of accomplishing that task. The first of these three is the right tackle. In our example play, Marc Columbo's responsibility isn't just to neutralize the left defensive end with an angle block. He is to try to drive the end as far away from the hole as possible.

The second is the fullback, who on this play was Deon Anderson. Anderson's job is to perform a running drive block at the strongside linebacker. His goal is similar to the tackle's in that he wants to push the defender out of the hole as far as possible, but it is made more difficult because of the amount of ground the fullback has to cover before he can make his block. That might be too big of an impediment to overcome except that the outside linebacker has the responsibility for keeping the play from bouncing outside of his gap. That obligation is such that Anderson should have enough time to make his block if he gets on his horse.

That's where the third person in our trio, left guard Cory Procter, comes in. His main focus is to ensure that the middle linebacker does not stuff the gap. If everything goes well, Procter will leave the hole completely clean of the linebacker fill but at the very least he needs to make sure that the linebacker is blocked to one side or the other so that some kind of run lane crease is made. The worst result is if the guard does not clear the linebacker out, as the runner will either get stuffed in the hole or will have to bounce the run outside of the intended point of attack of the run.

When these blocks are made, the halfback will find a lane that can only be closed by the strong safety. If the safety moves quickly, he can usually hold the play to around five yards, but if he misses the tackle, this run can turn into big yards in a hurry.

Hat tip to BTB's own icStars, who created the graphics for KC's article in the magazine and has contributed graphics to this blog. Thanks!