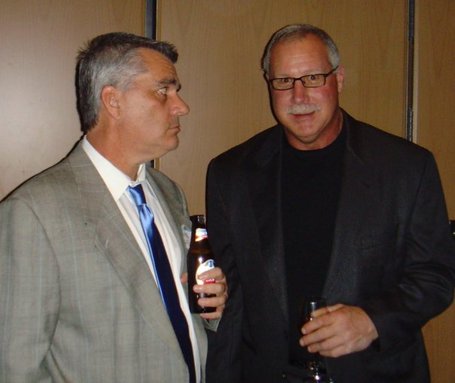 Our evening with the "retired Cowboys'' - we learned they dislike being referred to as "old Cowboys'' - was so full of warmth and humor and surprises and scrapbook moments that the only way to do this is to try to provide a quick glimpse into our dealings with each of the celebrities with us Tuesday at the CBS-TV taping of "Glory Days.''

Let's start with our visit with a guy who can certainly fire you up for Cowboys-Eagles. ... "The Manster,'' Randy White:

Full disclosure: His people have talked to my people (i.e., me) about me co-writing his autobiography. But, as he told me before the show, there's a problem.

"To really do a good book, it'd have to be one of those tell-alls,'' Randy said as we mixed-and-mingled in the VIP room. "I don't want to ‘tell all.' Not about other guys. I don't want to hurt people.''

But then White took the stage at the Winspear Opera House in downtown Dallas, along with Dorsett, Staubach, Ditka, Pearson and Lilly, and offered up a tale that ... well, it would've been perfect for our book.

White talked about Super Bowl X, his second year, and the fun the team had that week in Miami.

The Super Bowl Week party in that South Florida nightspot began to get too hot, and the Cowboys players needed to make their escape. White and fellow 1975 "Dirty Dozen'' draftee Burton Lawless were offered a ride in a police car. As they were getting into the vehicle, Randy noticed that there was somebody already in the back seat. A prisoner, it seemed.

"Scraggly, long-haired guy, a mess,'' Randy said. "I wanted no part of him. So I sat in front and told Burton to go back there with him.''

The police car moved along, and Scraggly spend the ride tapping White on the shoulder. White tried to ignore him, but finally turned around.

"Turns out,'' White told the crowd, "the guy in the backseat was Willie Nelson.''