Daryl "Moose" Johnston was on hand at Keller High School on Thursday to to talk to a group of 150 high school students about living a healthy lifestyle. He also presented a $10,000 check to a finalist in a Proctor & Gamble contest. Jim H., the finalist, got to choose what part of his community gets the money, and decided on Keller ISD for use to promote more programs for physical education.

Moose talked about his experiences in the NFL and his thoughts on the current state of the Dallas Cowboys as well as the NFL Play 60 program, designed to encourage children and teenagers in becoming more active in their everyday lives. (See details on the program at the bottom of this post). After Johnston's presentation to the kids, Blogging The Boys had the chance to speak with him more in-depth about the Dallas Cowboys and the current season.

First though, he had to get the name story out of the way. He told the Keller High School students the tale of how Babe Laufenberg gave him his nickname, "Moose", and how it was Troy Aikman's reference of the name to John Madden that started a national craze.

"I lost my first name for about ten years," Johnston said, grinning.

He also talked about the great Cowboys teams of the 1990's and how he felt the best game they ever played was the 1992 NFL Championship against the San Francisco 49ers. He spoke on how their biggest rivals at the time were the 49ers and the Eagles, teams they continually faced in big games during the season and in the playoffs. He also expressed what he felt was the key to those teams' success over the years.

"We were more than teammates, we were friends," Johnston said. "We believed in each other, not just the coaching. When you believe in one another, you can accomplish anything."

These statements about those great Cowboys teams led directly into questions on why the current Dallas Cowboys are struggling so mightily. Johnston was candid in his responses, saying that the Dallas Cowboys are just flat out beating themselves. No major injuries, no actual coaching issues -- just flat out making horrible mistakes at the worst time. He expressed how the Cowboys were just one away from beating the Redskins, Bears and Titans, which makes this season all the more frustrating.

Asked on whether this season could be turned around, especially with a win in Minnesota, Johnston was adamant that it could be done.

"Yeah. It just takes...that's why the Tennessee game is such a really astonishing outcome to me. You're 0-2, you're backs are against the wall and you go down to Houston and you play really well. Then you see what the Giants did to them and you wonder 'why didn't you beat them by more'. We talked to Houston and they felt they let the game get away from them.

"You do such a great job going into your bye and you come out -- how can you have such a lackluster performance against Tennessee? You fall behind 17-3, at home, right away. It's just astonishing." 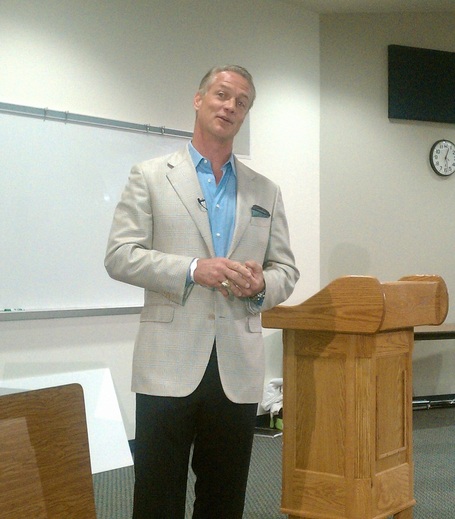 The common theme through the first four games of the season have been the penalties and the game-changing mistakes that were made. Johnston talked about how some are excusable, most that we're seeing are mostly a result of lazy play by the Cowboys.

"There are some penalties that are just part of the game, you know, it was an aggressive penalty and that's going to happen," Johnston said. "When they're not smart -- when it's pre-snap, when it's bad technique -- half the holding penalties, half the blocking in the back penalties, those are just bad technique. It's lazy. You got yourself out of position and now you have to foul."

Of course, most are pinning these mistakes on the coach. Throughout every question relating to the Cowboys, Johnston was adamant that Wade Philips does not deserve the blame for these individual mistakes -- not at the NFL level.

"If the coaches care more than the players at any level then it's not good. It's just not good. Wade doesn't like to hear his name called all the time, that he's on the hot seat and he should be fired. You know, he changed some things after the Chicago game. That's big."

Johnston impressed upon me that Wade was making the necessary changes, yet the players were failing him. Especially after the Cowboys played well against Houston then fall apart against Tennessee.

"When you make a change and have a positive outcome, then you run that same schedule and have the same negative outcome -- who's fault is that? Is that Wade's fault? I don't think so. The quarterback and the coach get more credit than they deserve and more blame than they deserve. It's just the way it's always been.

"Deep down inside the players have to care more than the coaches do."

More from Moose on kids being healthy...

Johnston spent close to an hour talking to the students of Keller HS, expressing his passion for health and wellness and his concern with the overall health of the younger generations. His big emphasis was on parents and schools getting kids involved in sports outside of the "normal" team sports, activities that can be learned and enjoyed once that student is out of high school and college.

"If it's something that the entire family embraces it's going to have a longer lasting effect," Johnston said. "Anything you can do as a family is the key. I had a friend of mine tell me, 'As your kids are growing up it's great that they play team sports but make sure they learn how to ski, learn how to play golf, learn how to play tennis. Those are some of the things you can do as a family.' You take family vacations and build your vacations around that.

"As long as you can build the activity around the family component I think it has a greater opportunity of taking hold."

Johnston spoke about eating healthy and the alternatives that teenagers and parents have other than fast food and processed foods that currently control most family's diets. What he is really passionate about is proper hydration -- drinking plenty of water and staying away from soda. He also believes that Gatorade is not necessarily the best thing for you.

One common and alarming issue with modern families is the lack of a proper diet. With parents working full time jobs and children involved in school activities, most say that it's near impossible to maintain a well-balanced diet throughout the family when there's not enough time to a proper dinner to be prepared for a "family meal." Johnston doesn't believe this is the case.

"If you're forward thinking and proactive I think you can eliminate the 'busy-ness' of the schedule as an excuse," Johnston told Blogging The Boys. "There are healthy fast choices that are out there. Whole Foods has a great, great menu line over at their stores. There's a number of places that you can go to; you don't have to go to McDonald's, Burger King, KFC for your meals. It's just a matter of understanding what's out there and making better choices.

"I challenge anyone out there that if you go on a diet that is more whole food sourced and not processed food sourced, you won't feel better, you won't sleep better and you won't have more energy."

One of the most alarming trends across the nation is the lack of mandatory Physical Education in high schools. With schools more focused on academics and "team" sports, P.E. has now become an elective in most states, including Texas. Johnston talked to the Keller students about Naperville, Illinois, a town that has made P.E. mandatory in a study to determine the effects of physical activity on the overall well being of students.

What the town and the school district has discovered is that in the 60 to 90 minutes directly following an hour of decent exercise, students are best prepared for learning. Their minds are more receptive and they perform better in school.

"What Naperville has done is to schedule tests, exams and any major academic function in this period following P.E.," Johnston told the students. "They've found a direct correlation between rising test scores and physical activity."

Johnston believes that P.E. should be mandatory across the nation and that there is already enough information out there to prove that P.E. would instantly improve the overall performances for students in school.

"Kids are going to be healthier, they're going to miss less school, and the kids will behave better. Testing scores will go up and that's been proven by the school in Naperville, that 90 minutes after exercise is the peak time for learning. The information is there it's just...why are we waiting?"

Blogging The Boys would like to thank Daryl Johnston and Proctor & Gamble for the opportunity to come out to Keller for their presentation. You can find more information on the "Take It To The House" program on Facebook. Through Proctor & Gamble's "Take It To The House" program, eight finalists across the nation will have the chance to not only win a trip to the Pro Bowl in Hawaii, but will earn a year's supply of P&G product and the chance to donate $10,000 to their local community in support of NFL Play 60.