Remember this little picture from last year's opening game at Cowboys Stadium vs. the Giants? A reader sent it to NBCDFW.com alongside other claims that the Giants had treated the new locker room with little respect. 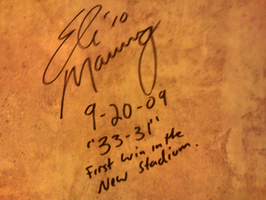 Eli Manning apparently thought he was being particularly witty when he left his mark in Cowboys Stadium last September. Funny thing is, at some point Eli must have realized that that might not have been the most opportune thing to do against an opponent whom he'll be playing twice a year, and it took him until early December last year to even acknowledge that the signature was in fact his.

"Yeah, I kind of heard a few things about it,'' Manning nonchalantly said. "I figure they'll eventually get over it."

With the return trip to Cowboys Stadium looming, he's now changed his tune. Jan Hubbard from the Star-Telegram reports that in a conference call this afternoon, Eli Manning now says that 'no disrespect was intended'.

“A lot of different teams in opposing locker room, assistants have players sign opposing walls,” Manning said on a conference call from the New York area. “I’ve done it at a lot of different places around the NFL and I thought they were starting a new tradition. So it will be interesting to see if anybody else has signed the wall, or if I’m the only one, or if they erased it.”
“It’s not like I was trying to do anything disrespectful to their new stadium by any means.”

What a load of bull. Eli, just this once, man up.