The 31 NFL teams that did not win the Super Bowl begin a long period of introspection (aka offseason), as they squarely face their transgressions of the 2009 season, repent and seek redemption. Helping them on their arduous path toward postseason glory is BTB, with the second and final installment of the seven deadly statistical sins in the NFL that will lead you straight into the hell that is a losing record and deny you postseason heaven. (See Part I here)

The data below is based on all 256 games of the 2009 regular season. Here, then, are the last three keys to NFL salvation. The percentages and the games won/lost below refer to the probability of losing when committing each of the seven deadly statistical sins.

The message is clear: repent from your sins, for the next Super Bowl is nigh!

More after the jump...

The Seven Deadly Statistical Sins in the NFL (continued)

5. Sloth is often defined as being physically or emotionally inactive, like, say, in the first quarter of a football game.

A slow start has a much bigger impact than I had expected, and the effects are already observable after the 1st quarter. Statistically, almost 3/4 of all games last season were basically decided after the 1st quarter. Troy Aikman said something to the effect that "There is overwhelming statistical evidence that the team that holds the lead by halftime also wins the game". Not wanting to be out-stat'ed by Troy, here are the full stats for the 2009 season by quarter:

For those keeping track and who miss the results for 'trailing after the 4th quarter', the losing percentage is 100%. Who'd have figured, huh?

Keep in mind that as we look at these season stats, all the numbers are for the average NFL team. So how would an elite team compare against these averages?

There are only three teams in the NFL that have had a winning record in each of the last four years. The Colts, the Patriots and, surprise, surprise, our Cowboys. So I'll take the Cowboys as the elite team to compare against the averages:

Cowboys regular season W/L record based on scores at halftime, 2006-2009

The Cowboys have blown only three halftime leads in the last four years (PHI '06, PIT '08, DEN '09), and the 90% winning percentage is higher than the 79% NFL average, as is to be expected from an elite team. Not perfect, but pretty close.

When trailing by halftime, the Cowboys have lost slightly more than half their games (57%), also a lot better than the league average at 79%. A word of caution though: all of the comebacks the Cowboys have staged after trailing by halftime have come in situations where they were trailing by a touchdown or less. Abandon all hope when the opponent leads by more than a touchdown at halftime (NO '06, WAS '07, STL '08, NYG '08) - we lost all those games.

6. Greed or "Avarice" describes many types of greedy behavior, and includes disloyalty, deliberate betrayal, or treason, like when you let a pass rusher get to your QB unblocked.

Raf just pointed out recently just how deadly sacks can be. The numbers below show the effects of giving up more sacks than you get yourself.

There is no doubt that a sack is an evil thing. I shudder at the merest thought of Romo being sacked, and I've done a lot of shuddering last season, more so than in previous years. Romo's sack total has started inching up again. Not good for my mental health.

7. Pride/Hubris. Pride is widely acknowledged as the original and most serious of the seven deadly sins, and indeed the ultimate source from which the others arise. Pride is sloppy route running because "Hey, I'm the number 1 receiver here". Pride is the QB going for the 60 yard highlight reel pass instead of checking it down to the hot receiver. Pride is the running back who fumbles on runs down the left side because, against better advice, he likes to keep the ball in his right hand.

In the word of the immortal Marcellus Wallace: "... Pride. Pride only hurts, it never helps"

Now that we know of all the seven sins, it is time for a confession. I must confess to the sin of lust, I admit I harbor lecherous and improper thoughts about cheerleaders. Mostly they revolve around their pom poms and skimpy uniforms. I ask for your forgiveness and offer up one of my trophies in the hopes of redemption. 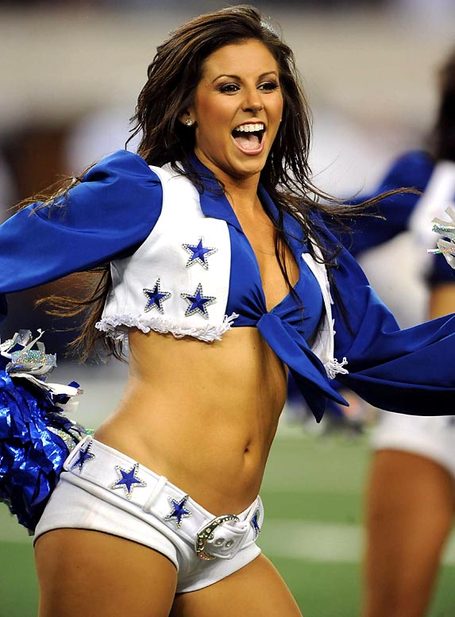