Cowboys Third Down Offense: Inside the Numbers

Share All sharing options for: Cowboys Third Down Offense: Inside the Numbers

The 2009 Cowboys had the most prolific offense in franchise history with 6,390 yards, handily outpacing the 1978 Cowboys (5,916) and ranking second in the NFL, just 71 yards shy of the New Orleans Saints. The Cowboys also ranked No.1 in yards per first down play (6.52) and total yards per play on offense (6.3).

Many were the offensive highlights we saw last year, from Miles Austin's franchise record breaking 250 receiving yards against Kansas City, Felix Jones' league leading 5.9 yards per rush attempt, Tony Romo's career high and franchise record 4,483 passing yards, his league leading 2,154 yards after catch, and so on and so forth.

The official stats show that last season the Cowboys managed to convert 40.5% of their third downs (82/202), and were ranked a middling 14th in the NFL. That 40.5% conversion rate is the lowest for a Cowboys team since 2005. The one piece of good news in this stat is that the 202 third downs were actually the sixth fewest in the NFL (the NFL average was 215) - looks like the Cowboys offense was pretty good at avoiding third down situations all together.

To better understand what was or wasn't happening on third downs, we'll need to look at some stat breakdowns.

The stats in this post are broken down by 'distance to go' on third down, and follow the NFL definitions for short and medium situations. I've broken up third and long situations into 8-10 yards and 11+ yards as they will be relevant for the analysis.

As you look at distance to go on third down, you would naturally assume that the longer the distance, the less likely a first down conversion becomes. And you would be right in that assumption.

Advancednflstats.com have run an excellent analysis detailing first down probability, which they've summarized in the graph below. Notice the almost linear decrease in conversion probability, both in second and third down situations. 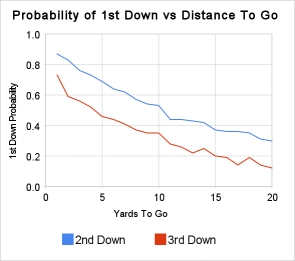 Romo's completion rate on third downs is 56%. Not good by any stretch of the imagination, but if you were to take out Roy Williams' numbers, it would improve to 63%. Now before I get blasted again for fiddling with the numbers, take it as food for thought only, perhaps there is a lesson in there somewhere ...

Pass completion percentages by down and distance, 2009

Of the 43 pass plays in third and medium situations the Cowboys converted only 14. It should come as no surprise that only Austin converted for a first down with any regularity, converting seven of nine passes thrown his way for a first down. Even Jason Witten (4-11) did not shine at this distance. Roy Williams (2-10) and Patrick Crayton (1-6) at least caught a pass, Tashard Choice failed twice (0-2), all others were 0-1 (Marion Barber, Martellus Bennett, Sam Hurd, John Phillips). The question here is, what are the one or two pass plays on medium yardage that the Cowboys could and should use with a fairly high success rate?

Nowhere has Barber's fractured thumb and torn quad affected us more than on these medium distance passes. In 2008, Barber caught 52 of 62 passes overall for a league leading 85.2% reception rate. This year, he's only 26 for 36, and that's critical production quantity and quality the Cowboys sorely missed.

No other quarterback in the NFL has had to pass on more third and long/very long situations ithan Tony Romo (76 pass attempts on third an 8+). That is one big, ugly stat to hold the lead in. Remarkably, Stats LLC shows Romo with the fourth best completion percentage at that distance in the league at 38.2. It would stand to reason that the longer the distance required on third down, the lower the conversion rate would be, but Romo actually completes more passes in third and long/very long situations than in third and medium situations.

Every week, NFL quarterbacks line up on third down knowing that if they can connect with their clutch receiver - that go-to guy who rarely lets them down - they can keep a drive alive rather than head back to the sidelines in frustration. So who's that guy for Tony Romo?

Stat geek alert: Click on the column headers to sort the table to your liking

While Witten continued to impress with a high reception rate, this has not translated into above average third down conversions. Miles Austin and, much to my surprise, Patrick Crayton, are now heavily involved in the battle for 'Romo's security blanket' - a battle that is sure to extend well into training camp and will most likely also feature Kevin Ogletree.

Williams on the other hand will have to do a lot of, excuse the pun, 'catching up' to stay in that battle. 19 of 26 passes on third down not caught simply doesn't cut it.

Running backs first down conversions by down and distance, 2009

On third and medium, the running backs ran the ball seven times and converted two times.

Stats LLC rank Barber's 57% conversion rate on third down as the 16th best in the league. Noteworthy for a rushing ranking is that four quarterbacks make it into the top six (Rodgers, Sanchez, Garrard, Campbell) with high third down rushing conversion percentages.