Share All sharing options for: Cowboys Pass Defense: Most Targeted Cornerbacks (Part I)

What constitutes a successful passing game?

You'll probably get a different answer from every person you ask, but there's a good chance that words like execution, talent, playcalling, scheme and perhaps even attitude/passion would feature prominently among the various answers.

Creating mismatches can also mean focusing on the (perceived) weaknesses of an opposing player and exploiting these ruthlessly. In today's post, we'll look at the Cowboys corners, to see which one of them has the biggest Bull's Eye painted on his chest by opposing offensive coordinators, and see how they compare to other players in the NFL. In the coming days we'll look at our safeties and linebackers in part two of this post . 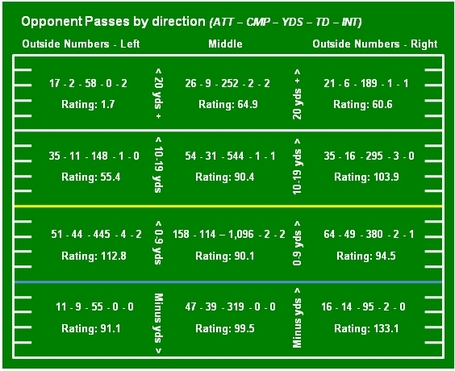 Ever wonder where opposing quarterbacks are throwing the ball against the Cowboys, and how successful they are? No? Well I did, so I reverse engineered the game-by-game stats at ProFootballFocus.com to come up with the nifty little picture on the left.

The graphic breaks down the regular season passer rating of our 2009 opponents by pass direction and -distance.

Quick note on the stats used below:

Defensive Passer Rating: uses the same data and formula as the better known passer rating for the quarterback ( i.e. completion percentage, yard per attempt, touchdowns and interceptions), but applies them to a defender, where they become completion percentage allowed (aka 'burn rate'), yards per attempt allowed, touchdowns allowed and interceptions made.

All passing metrics courtesy of ProFootballFocus.com.

Terence Newman: Our veteran corner was targeted 94 times by opposing quarterbacks, allowing 53 of those throws to be caught for 698 yards and had a 'burn rate' of 56.4%. With only three interceptions to his credit his defensive passer rating is a modest 80.9. Here's how those figures compare to his peers:

Mike Jenkins: Our first time pro bowler was targeted more often than Newman. Opposing quarterbacks threw his way 99 times, and 50 of those passes were completed. Jenkins gave up 585 yards and managed an impressive 50.5 % burn rate. He picked off five passes and turned in an eyebrow raising 54.5 defensive passer rating.

Orlando Scandrick: Our third corner saw about half the playing time of our two other corners, but still saw opposing quarterbacks going after him 83 times, 53 of which resulted in completions for a total of 566 yards and a 62.7 burn rate. He allowed only two TDs. The high number of targets is partly a result of Scandrick's role as the slot corner in the nickel and dime packages, but is also an indication that out of our three corners, he is the preferred target for opposing offenses.

Scandrick is targeted on 14.5% of all snaps that he is on the field, a higher percentage than any other cornerback in the NFL who participated in at least 25% of his teams offensive snaps. It's official! Nobody in the NFL is targeted more than Orlando Scandrick.

Clearly, opposing teams singled Scandrick out as the 'weak link' in the our secondary. Equally clear is that the 2nd year, 5th-round pick delivered a solid to good performance while taking the most 'enemy fire'.

Watch for Scandrick to come back with a vengeance next year, because that 14.5% number smacks of one thing: Disrespect - and don't believe for one second that Scandrick is not aware of that number. In fact, I'm pretty sure he has circled September 9th in his calendar with the words 'Payback Starts Now'.