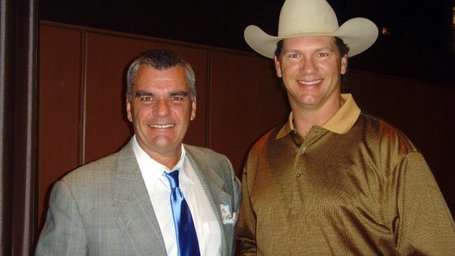 My willingness to play along (and pretend to understand) Jay Novacek's offbeat sense of humor is probably one of the reasons we've had a friendly relationship for almost 20 years.

He is an idiosyncratic guy, this Dallas Cowboys legend, and his willingness to laugh his way through almost anything is among his strengths. But there is no laughing today. Jay's wife, LeAnne, is dead.

I'm going to take what I hope is a short leave-of-absence from Blogging The Boys to concentrate this spring on Mavs coverage at DallasBasketball.com and on ESPN Radio. (I'll still be reading the finest Cowboys site in the land, and please leave the door unlocked for my return, OK?) And I'm going to leave you (temporarily) with a tale that should cause all of us to take stock in how we spend our time, what we value, and who we value. ...

During my time covering the Cowboys for the newspaper and on the radio, Cowboys All-Pro tight end Jay Novacek met league requirements with reporters with whom he wasn't comfortable; he'd stand at his locker and purposely say the most boring things he could conjure up, and eventually, media visitors to his locker dried up. One year he placed a Dixie Cup in his locker alongside a little sign reading "Interviews 25 Cents.'' Obligingly, local reporter Suzie Woodhams regularly put her quarter in the cup. ... at which time Jay would give her even more boring answers than usual.

Novacek played favorites with the media. I didn't mind. I never had to pay the 25 cents.

He is as unusual a person as he was a player. For most of the years I've known him, his idea of a vacation has been a pickup-truck drive from his North Texas ranch to his farm back home in Nebraska.

"What music are you listening to during the drive?'' I once asked him over his cellphone while he was on just such a trip and while we were live on the radio.

I arranged for him to do a weekly show with me on 570 KLIF, and he was unfailingly dependable ... and quirky. He insisted that the entire show be about hunting and fishing and such. I insisted I ask him questions about the upcoming opponent and such.

So that's the way it went. For 15 minutes every Friday. I'd ask him about the Redskins and the Giants, and he'd answer about deer and ducks.

Oh, and the compensation for "The Jay Novacek Show''? He wanted a John Deere riding lawn mower. So that's what I got him.

Dependability? Jay was a high-school star in Nebraska, one of the most promising track athletes in the country and an option QB who dreamed of playing for Oklahoma and Barry Switzer. The offer from OU didn't come ... so Novacek committed to Wyoming. Later, a scholarship at Oklahoma opened up. Switzer's staff called Jay and invited him.

Later in his life, of course, Switzer would come to coach the Cowboys. And - maybe because Barry is as much of a goofball as Jay is - Novacek loved the experience almost as much as pal Troy Aikman hated it.

Aikman once said, "If I ever have a son, I want him to grow up to be like Jay Novacek.'' That speaks serious-toned volumes about the man. ... but as I reflect today on his family's loss, I can't escape thoughts that make me smile.

At the recent "Glory Days'' TV show taping in downtown Dallas on Jan. 5, Novacek and I spotted each other from across the cocktail-party room. We talked about his marriage to LeAnne and he beamed ... especially when the subject turned to his young daughter. He and his family were into cutting-horse competition and into competitive outdoor volleyball - Novacek, naturally, is a near-championship-level competition at both - and his business interests and his charity work with the Children's Advocacy Center. It was a semi-formal event, but of course, Novacek was positioned underneath his gigantic and ever-present cowboy hat.

I then mentioned to Novacek that the only reason I approached him was to escape Charles Haley. Charles was at the party and I had no desire to interact. Haley and I go way back. And the memories are not pleasant. When I shared that fact with Novacek, his face lit up in a smile.

"Hey, Charles!'' Novacek bellowed across the room. "C'mere! Look who's here! It's your old friend Fish!''

Haley and I spoke without incident. ... maybe because Novacek's grin made everything seem OK.

But today, everything is not OK. LeAnne is dead. It's an apparent suicide. LeAnne was found at her mother's home in Burleson on Monday with a self-inflicted gunshot wound.

Jay Novacek has given Cowboys fans endless thrills. He's given me endless laughs. And now, at this moment, he and his family need your endless prayers.