Cowboys Third Down Defense: Inside the Numbers

Share All sharing options for: Cowboys Third Down Defense: Inside the Numbers

The 2009 Cowboys defense allowed the fewest points in the NFC and the second fewest in the NFL behind the Jets, ranked ninth in yards per game, fourth versus the run in the NFL and recorded two consecutive shutouts for the first time in franchise history

Improvements versus the 2008 Cowboys could be seen across the board. The 2009 Cowboys allowed fewer rushing yards per game, touchdowns, total points and third down conversions.

Whoa, Nelly! Hold up there. Third down conversions?

I for one distinctly remember holding my breath, muttering silent prayers or simply closing my eyes when the Cowboys defense faced a third down, particularly a 3rd and long.

But the numbers are clear: The Cowboys allowed a 35.0% third down conversion rate (70/200), and are ranked 5th in the league. Should I trust what I saw or trust the stats?

As the saying goes, never trust a stat you didn't fake yourself, so I gave in to my OCD and jumped right into the numbers. On a recent cold and snowy Sunday afternoon I set my controls for the heart of the third down defense. Follow me on this journey into the netherworld of stats.

I initially started with a more detailed split of our third down defense, because I suspected something weird was afoot on third and long situations.

Opponent 3rd down conversions by down and distance, 2009

No sir, these conversion averages are actually quite good for a defense, even on third and long and third and very long. If you compare the numbers above to the NFL averages below, you'll see that the Cowboys handily beat the average for third down conversions - as they should if they rank fifth overall in the NFL. 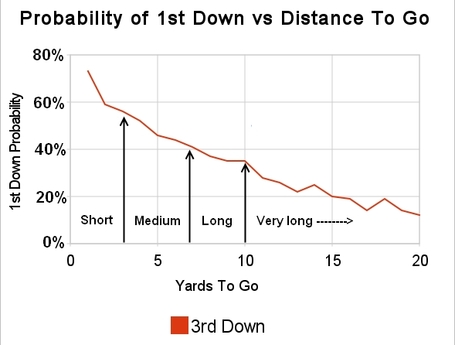 Hmmm, was I misremembering the anxiety I felt when our opponents were in third and long situations last season? I continued on my quest for statistical enlightenment and looked at the third down conversions allowed for the passing game only - on the assumption that perhaps our success against the run was clouding the overall stats.

Opponent Passing 3rd down conversions by down and distance, 2009

Somewhat surprisingly, the Cowboys third down passing defense apparently held up its side of the bargain. And again, I was coming up short in my search for the truth. By now, I was developing a severe case of arithmophobia, but crunched on bravely on my trusty TI 83 plus. Now I decided to look at completion percentages.

Opponent completion percentages by down and distance, 2009

Only three quarterbacks in 2009 managed to barely even clear 40% on their 3rd and long completion rate, and those numbers are still a far cry from the Cowboys 65% completion rate allowed.

So my eyes did not deceive me after all. In third and long situations, our DBs were playing about a mile back in an effort to keep the play in front of them, and crucially, in front of the 1st down marker. Fortunately, only 21 of the 79 completions on third and long actually resulted in a first down, but I swear that my heart skipped a beat on every one of those 79 throws.

Also unsuited for the faint of heart are the total yards given up on 3rd downs: 1,197 or 5.9 YPA. I don't know whether this number is high or low relative to other teams, but consider that outside of 3rd downs, our defensive YPA is a full yard lower at 4.9.

Pray with me that we draft a player for the secondary this year who has hands that are not made of stone. Because if not, every time the Cowboys are defending 3rd and long next season, you'll need to hold on real tight to your beer once again: It is almost guaranteed that there will be another long completion - just pray that it's short of the sticks.