A side of brontosaurus beef that would make Fred Flintstone drool. 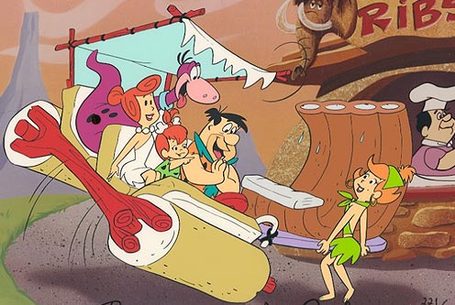 Last year, the Cowboys had Central Michigan's Louis Delmas high atop their wish list.  Delmas listed at 5'11", 198 lbs., before weighing in for Combine observers at 203 lbs.  He displayed a fearlessness attacking the line of scrimmage at the Senior Bowl and roared from a 2nd-3rd round prospect to the 33rd overall pick.

Thomas has almost identical dimensions.  He's 5'11", 199 lbs.  There are some concerns about his ability to attack the LOS but his deep skills are unquestioned.  Thomas can track receivers and gets his hands on the football.  He's rated very high on some semi-pro boards, but I think another rush on offensive tackles, a very deep crop of underclassmen, which makes for a very deep first round, will drop him a bit.  Safety tends to fall a tad as a position. I can't see the Cowboys finding one of the OTs at 27, or even top G Mike Iupati, but their rise means other good players must fall.  A player like Earl Thomas would be welcome.

Smart, tough, and interviewing tremendously at Indy, according to this report. Like Markice Pouncey, he's another top C prospect who could replace Cory Proctor almost immediately.

Every quality pro NT free agent prospect has been locked up.  Thomas has the size and agility to play on the nose in Wade Phillips' scheme, where lateral mobility and the willingness to chase are as vital as the ability to stack plays run right at you.

Thick, girthy guard, 6'3", 318 lbs, who run blocks effectively and has the mobility to block in space.

CB prospect with the speed and fluidity to play man-to-man.

A big target with lots of tools, Gettis is a bit of an enigma.  He has boom or bust potential, but everybody at this stage of the draft carries the same tag.  He'll need to show better hands and consistency to stick, but he has the size and deep speed to excel if he gets focused.