It's already almost a week into free agency, and the Cowboys are playing a waiting game so far. Depending on what your expectations were for free agency and later for the draft, no news in this case may be good or bad.

It's not like the Cowboys have not yet shown at least partial glimpses of their hand,  but so far we're not clear on how strong a hand Jerry Jones actually has. Is he bluffing? Or does he hold an ace up his sleeve that nobody knows about yet? Here's what we do know:

Jerry Jones famously addressed the gathered masses at the Combine a few days ago and announced that despite finally getting that one coveted playoff win, there was no room for complacency for any player and that he wanted players 'nervous'. With regard to next season's roster, he said he'd be looking for 10-11 new players.

This is a message that, while worded differently, has been fairly consistent coming out of the Cowboys organization.

While Jerry Jones said the club won't focus on one position in this draft, he also said the Cowboys need to make "obvious improvement" in the offensive line. "I'm looking at everything but quarterback," Jerry Jones said. "There's not a position we wouldn't take with that first pick other than quarterback." - DMN

A lot of the focus these past weeks around Cowboys nation has obviously been on the O-line, and it is no secret  that our O-line is not getting any younger. But where Jerry Jones is a little more circumspect in his words, Stephen Jones may have provided a clearer glimpse of where the Cowboys could be going:

"I think (releasing veterans) could ultimately happen," Cowboys vice president Stephen Jones told the Fort Worth Star-Telegram. "It hasn't been decided, but it could ultimately fall that way. I think we've got a lot of young players, if given the opportunity, would probably play better than most people think." - Sporting News

No country for old men?

Take a look at the Cowboys' defensive roster: Only two starters have seen their 30th birthday. The team has an abundance of youth and finished 2nd in scoring this year. Looking for holes? You won't find many.

On offense, outside of the O-line, only Patrick Crayton is 30 or older.

Despite all the public outcry about the age of our O-line, what may have gone quietly unnoticed is that some of the other units on the team have have been getting steadily younger.

The start of another youth movement?

The chart below shows the average age of the Dallas Cowboys starters from 1987 through 2009. To calculate this, I used the average age at the start of the season of each player who started at least one of the 352 individual game starts (22 players x 16 games = 352 game starts). 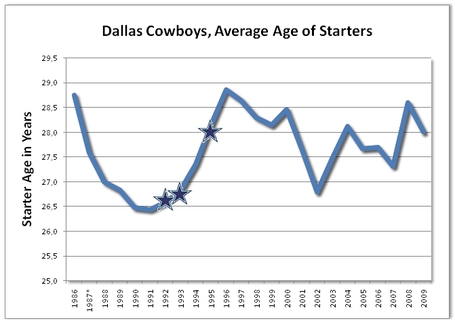 Call it the law of entropy, call it a logical progression, whatever - the fact is, if you don't work on your roster, it's average age will increase by one year every year. Could the Cowboys use a little roster rejuvenation? From the graph above, it sure looks like it.

Don't get me wrong, I'm not advocating a 1989 Jimmy Johnson style youth movement, the team was in a very different situation then.

Remember how the Cowboys basically had an open door policy for free agents, with new free agents signings in what felt like every week? By the end of that season 64 different players had suited up and 36 started games for the Cowboys. In 1990 and 1991, the Cowboys fielded the youngest teams of the last 20+ years, and famously went on to win three Super Bowls.

Of course, the Cowboys also had the Hershel Walker Trade and hit the draft jackpot in three successive years ('88: Michael Irvin, '89: Troy Aikman, '90: Emmitt Smith), but there is a lesson here, and it's actually about what happened or didn't happen after the Super Bowl years.

After a franchise-high average age of 28.9 in 1996, the average age stayed over 28 until the 2001 and 2002 seasons, when many of the remaining Super Bowl winners, most of them well into their 30s by now, as well as some free agent acquisitions who had also 'come of age', eventually retired or moved on. Arguably, the '01-'02 drop in age was less the result of a strategy and more the result of circumstances.

The age curve over the last decade has been erratic. The 2009 Cowboys, with an average starter age of 28.0, still rank as one of the older teams in recent franchise history. And this despite dumping T.O. (35 at the time), Zach Thomas (35), Greg Ellis (33), Anthony Henry (32), among others.

'Roster rejuvenation' is a long term strategy. As such it runs counter to a quick fix mentality that is most often evidenced by some free agency signings. Failing to follow that strategy consistently may come back to bite you in a big way - witness Dallas' recently ended 13 year playoff win drought - and you'll find yourself scrambling and trying to plug holes at almost any cost (in dollars or player age) in free agency instead of building for the future.

Who should we target in free agency, and do we have an age limit for potential candidates? Will we see more of the 2009 draft class on the field next season, and would that be a good thing? What gets your vote: youth or experience?