Share All sharing options for: Mocking the Cowboys Draft: Six Weeks To Go 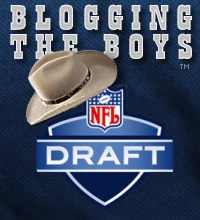 It's mock draft time, and boy, and don't you just love poring over all those mocks. Some you glance at and immediately start shaking your head in utter disbelief. Others you hold up and proclaim to be 32 commandments - like Moses with his two stone tablets on Mount Sinai.

I realize that some people would suggest that not just any draftnik with Internet access can make "official" proclamations… but they are wrong. We can. And we do. All the time. You can go all over the Internet and see!

As always, we recommend starting with Raf's Mock 4.0. In this week's mock draft summary, I've left out the quotes on which players some mock drafts like as our No. 1 pick. Instead, we look at some of the player names that have been linked to the Cowboys recently, and how 20 draftniks like the chances of these players falling all the way to the 27th spot. Enjoy.

Who'll be available at 27th?

Below is a table from 20 different mock sites and the draft spots they project for some of the players that have been linked with the Cowboys in recent weeks. The total at the bottom shows how many mocks see that particular player available at the 27th or later spot.

If, like me, you were hoping against all odds that Earl Thomas would somehow fall to us, abandon all hope. Some of the sites listed are clearly more reputable than others, but if you put any stock in these mocks, we'd likely have to trade up for Earl Thomas.

Also note how almost half of the mockers have Bruce Campbell going to Oakland with the eighth pick. Imagine the turmoil that would ensue if Al Davis suddenly decides to do one of his off-the-wall picks in the eighth spot.