Inside the Numbers: The 2009 Cowboys Running Game (Part I)

Share All sharing options for: Inside the Numbers: The 2009 Cowboys Running Game (Part I)

At the start of training camp in San Antonio last year, Head Coach Wade Phillips made it clear he wanted a dominant running game.

"We've got to establish a stronger running game," Phillips said.

Wade Phillips wanted a top ten running game in 2009, and he sure got it. The Cowboys jumped from 21st in rushing YPG in 2008 to seventh in 2009. Having Marion Barber and Felix Jones healthy for more games than in 2008 obviously helped with those stats, and the results can be seen in both quantity (YPG) and quality (YPA) in the table below.

But was the Cowboys’ running game really as good as as these stats suggest? Are some long runs by Felix Jones or Tashard Choice messing up the averages? And perhaps most important of all, just how good of a run game do you really have if on 8 rushing attempts on your opponents’ 1 yard line, you are able to move the ball forward by one yard just once?

If you made it past the jump, now would be a good time to buckle up, because we're about to enter into an area of heavy statistical turbulence.

Usually when looking at stats, you look at number of yards, yards per carry and other quantitative data. Occasionally you'll look at situational data like third down performance. Some of us prefer to trust our own eyes or gut feeling more than any stat, and there's absolutely nothing wrong with that.

Regardless of each of our positions on stats, most of us will agree that our running game was pretty good in 2009, most of the time anyway. But in which areas does the Cowboys running game still need to improve, where did it excel and where did it, ummm, underperform?

Some of you may be familiar with EPV, for those who aren't, allow me to summarize before moving deeper into the analysis of the Cowboys running game.

EPV is the average points a team can expect from any given down and distance situation. Brian Burke at Advancednflstats.com has compiled data from the  official NFL game books for 2,400 non-preseason NFL games from the 2000-2008 seasons to determine the average expected points value for every down and distance in the NFL (and has graciously made it available for downloading). To ensure that the data excluded data points influenced by an expiring clock and by desperate teams or teams with large leads playing differently late in games, he used only data from the 1st and 3rd quarters.

The outcome for first down field positions looks something like this, courtesy of advancednflstats.com: 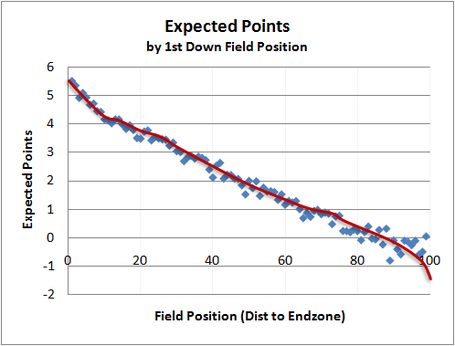 Note that a first down at an offense's own 27 yard line is worth 0.7 EP. This is critical to explain an important twist in the EP concept. Every score requires a subsequent kickoff, and this has value to the receiving team. So to understand the real value of a the score, we need to subtract the value of the kickoff. For example, field goals aren't really worth 3 points. In the long run, they're worth 3 - 0.7 = 2.3 EP. And touchdowns are really worth 6.3 EP.

I in turn have used Brian's data to assign an EPV to every single play (as recorded in the NFL game books) of every 2009 Dallas Cowboys regular season game. Yup, you read correctly. I can tell you exactly what each play in the 2009 season was worth using EPV.

The stat geek in me is still doing backflips every time I look at the sheer amount of data that I have amassed and will be dishing out in a series of posts over the coming weeks. But now back to our running game.

"Whoa, hold on dude" I hear you say, "you mean our running game was worth 16 points for the whole season?" Nope, that's not what I'm saying. The point here is that the Expected Points Value per running play for the 2009 season was positive overall, if only marginally so.

The way to think about these EPV numbers is that any number greater than zero means that the running game is adding value to the Cowboys' game. Just for perspective, using the same criteria, our opponents' combined EPV on 358 runs was -31.76.

The reason for this is that for most of the field, the average value of all runs combined is close to zero. Here's why: A first down play needs at least four yards to be at least break-even in terms of EPV, and in the NFL about 55% of runs on first and ten gain less than four yards. Of the 413 Cowboys runs mentioned above, exactly 200 were for three yards or less, so you end up with a situation where half your runs have a negative EPV, the other are positive, so your total running EPV should be at or around the zero mark.

So you're thinking to yourself, I've been reading this gibberish for five minutes now, only to learn that our running game is a zero sum game? Hold your horses, because this is where it gets interesting.

All the remaining breakdowns in this post will now be based on 419 runs, which excludes kneels by Romo, but includes turnovers, both by fumbles and by downs. Also, for your reference, the average EPV per run is 0.04.

Runs by field position - the early runner gets the yards

I've split all the runs into 4 separate field positions to see what the respective EPV's looked like. Have a look:

Looks like everything is just hunky dory for our running backs until they hit an invisible wall on the 20 yard line. As you look at these numbers, you might think to yourself that all those runs from the one yard line were a bad idea anyway, and that Garret clearly should have called for a pass. I'll explore that in a separate post, but passes from inside the five actually have an EPV of -0.82 per pass, so that's not the solution either.

Either way you look at it, our goal line play in 2009 underperformed (I am itching to use a couple of more illustrative words here ...).

Runs by down - Mighty fine on first downs

On second and third downs, the Cowboys running game looked like more of a 50/50 proposition: the likelihood of making the necessary yards for a positive EPV were about 50%.

Runs by quarter - Do our running backs tire easily?

Two things stand out when we look at the Cowboys runs per quarter. First is the even distribution of runs by quarter. And second is the wide swing in EPV by quarter, for which I have yet to find an explanation. I've taken out all runs after the two minute warning, and I didn't see any significant change. Taking out the six turnovers improves the numbers in the first three quarters, but not in the fourth, as the Cowboys didn't have any turnovers from the running game in fourth quarters.

To be honest, I'm stumped. Could it be that our running backs tire early? Or is the run blocking tiring early?

Runs by direction - Go left, life is peaceful there

As we look at the runs by direction, it seems that running in the direction of our much maligned left tackle actually looks like a pretty good idea. Now, far be it from me to use the table below as any type of grading of our offensive line, but it may bear considering as you think about exactly where you want help for the offensive line in the coming draft.

So now that we know all this stuff, what to do? Well, if I were the coach of the Cowboys, I'd run left all the time, but only on first downs, only in the first and third quarters, and only outside the red zone. I might not win any games, but boy, my stats would rock!

For the handful of readers that have survived this far, now that we've established the EPV principle here with the running game, we will take our analysis a lot further over the coming days and weeks. The EPV values will allow us to also look at the value of each and every play involving individual players, and we'll start with a look at our three running backs in the next post.

[Special tip of the hat to Brian Burke at advancednflstats.com for providing the EPV data and to TJ Johnson at the MileHighReport here on SB Nation, who is running a similar series on EPV and has been most helpful in ironing out some questions I had]