Share All sharing options for: Cowboys Draft '10, Part 15: The Tape versus The Track

Every February, about the time that the Senior Bowl concludes, the "professionals" caution us draftniks:  don't go crazy over 40 times and bench press numbers.  The players tape always means more.

Then, the Combine takes place.  The Pro Days unfold.  And good football players drop below guys with track stats.

Florida's just-concluded Pro Day offers us an interesting test case to track.  The Gators All-American inside linebacker Brandon Spikes left the day as the anomaly, the big Florida prospect who worked out poorly.  Spikes eschewed running at Indy and yesterday he looked sluggish, posting 40 times in the 5.00-5,10 range.  (Start at the 1:42 mark.)  He's being downgraded by unanimous consensus of the amateur draftniks, even though nearly all of them laud his game tapes. 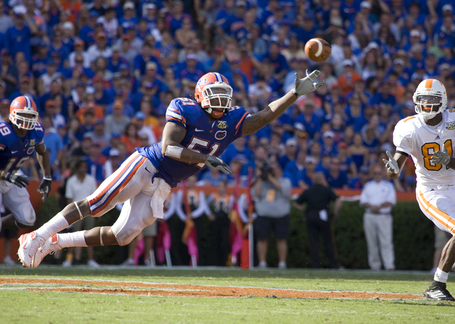 Two Men Say They're Jesus, One of Them Must Be Wrong

"Spikes’ tape is good, and he does have the ability to find the football and create as a downhill guy. But you have to question his ability to make plays sideline to sideline with his lack of pure straight-line speed."

Yet, Bunting's inside linebacker grades, created before the off-season workouts, rate Spikes 2nd, behind Alabama's Rolando McClain.   Bunting gave Spikes a 6.8 grade, signifying a player who, "becomes a starter in his rookie year…becomes a solid NFL player who has no real weakness…can’t be exploited or consistently taken out of games."

Which Bunting is right?  The one whose tape grade puts Spikes in the 26-36 overall range, or the one who is now backpedaling Spikes into the 4th round, based on a stopwatch time?

Let's not pick on Wes Bunting, because he has company.  Let's take the NFL Network's Mike Mayock.  He also rates Spikes as the 2nd inside linebacker in this draft.   In yesterday's report, he echoed Bunting, saying, "He ran a 5.1.  5.1 is a bad time and it tells the league he's a two-down linebacker only, and at that point where do you draft a kid like Spikes?  His tape speaks for itself.  He's a heck of a football player, but bottom line, the 5.1 hurts Brandon Spikes." (emphasis mine)

Mayock's probably right.  Spikes time will hurt him, but how much?  And how much should it hurt him?  The big-name pundits love Brandon Spikes' in-game performances.  Yet these same people are saying he's now likely dropped out of the 2nd round because he can't anchor a relay.

Spikes looks like a potential value to me.   I'm gonna watch Brandon Spikes this year, whether the Cowboys draft him or not.  He's the 2010 poster child for tape over track suits.  If he plays in the pros the way he's played at Florida, we'll have more evidence that football players should be judged as... football players!