Share All sharing options for: Mocking the Cowboys Draft: Five Weeks To Go

With barely five weeks to go to the draft, there is something in the air tonight. Can you smell it? It's the smell of Mel Kiper's hairspray wafting through cyberspace.

It's mock draft time, and there are more mocks out there than any sane person can keep track of. It's the time of year when even Lions fans have hope for their franchise, albeit briefly. It's also the only time Rams fans can actually "visualize" their team getting any better, and it's the time when Raiders fans begin preparing for the worst.

Mock drafts are just as wonderful as they are horrible.

Clowns to the left of me, jokers to the right, here I am, stuck in another mock draft with you.

As always, we recommend starting with Raf's Mock 5.0. There are not enough updates to the 3+ round mock drafts this week, so we'll skip that part. Instead, we'll look at which other teams the draftniks are projecting to be interested in the same players Dallas is interested in. Enjoy.

Who'll be available at 27th?

Below is a table from 20 different mock sites showing the draft spots they project for some of the players that have been linked with the Cowboys in recent weeks. As we've spent some time the last few days daydreaming about Dez Bryant and Anthony Davis, I've included them in the summary overview. The totals at the right show:

A) Avg: The average draft position for each player according to the 20 mocks. Where no position was given, I used the 35th spot to calculate the average. Obvious outliers (like Pouncey in 64th) I removed from the average.

B) In Reach: Number of mocks that see a player "within reach" of the Cowboys, i.e. available by pick 27 or later (Hat tip to blogger calmyron for the formatting) 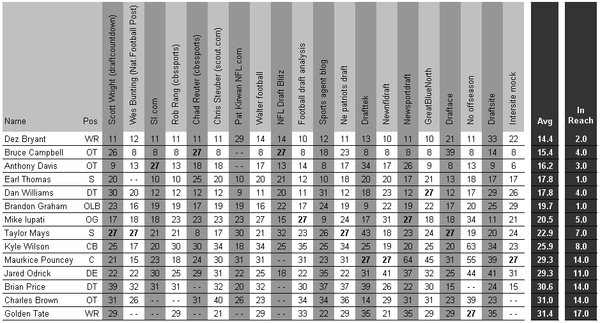 Who are our competitors for our target players?

Equally as important as knowing which player you want to draft is knowing how the other teams will draft.

On the assumption that the 14 players in the table above could be considered the Cowboys 'target players', I've reverse engineered the 20 mock drafts to see which other teams are going after the same bunch of 14 players. The way to read the table below - using the 49ers as an example - is as follows: 14 of the 20 mocks above predict that the 49ers, with the 17th pick, will pick one of Dallas' 14 'target players'. Out of these 14 picks, the position the 49ers are projected to draft most often is in the secondary: five of their 14 picks are either a corner or a safety. Three of these five secondary picks are projected to be Earl Thomas.

If you're looking for for help on the O-line, you should worry about the Steelers and Packers, and to a lesser extent about the Cardinals. The Colts will take whatever is left.

If you want Earl Thomas, Steven Tyler has two words for you: "Dream On". It would be a big surprise if he even makes to the 49ers, and if they don't take him, the Texans look like a sure bet with the 20th spot.

Although Jared Odrick's average position is 29.3, five mockers agree that he could go to the Patriots as early as the 22nd spot. If the Patriots thought he was rated too high for a 22nd pick, and that Odrick would still be around for the 27th, might this be where Jerry could look to leap-frog up to at least get ahead of the Packers if Iupati makes it past the Steelers?

If the scenarios were to unfold as outlined below, what would you do? Trade up or trade down, and who with?