Share All sharing options for: Mocking the Cowboys Draft: Four Weeks To Go

Four more weeks to go. You still can't stay away from those mock drafts, they're still too much fun.

But by now you are beginning to notice the names of some of the sites featuring mock drafts. And you begin to wonder just how seriously you can take mock drafts.

Mock drafts are a dichotomy. On one hand a mock is supposed to be an accurate representation of something else, as in a mock-up. On the other hand, to mock is to imitate in a derisive or unflattering way, to make fun of. They're begging to be ridiculed by their very name.

Regardless, they're still fun because they focus attention on players or positions that we can sit around and endlessly talk about. Because that's what we do, especially in the offseason.

As always, we recommend starting with Raf's Mock 6.0. This week we look at which of the players projected as possible options for the Cowboys are moving up the draft boards, and which aren't. Enjoy.

Below is a table from 20 different mock sites showing the draft spots they project for some of the players that have been linked with the Cowboys in recent weeks. The totals at the right show:

A) Avg: The average draft position for each player according to the 20 mocks. Where no position was given, I used the 35th spot to calculate the average. Obvious outliers I removed from the average, and Ive added the averages from last week.

Up: Maurkice Pouncey takes the biggest leap up the draft boards, jumping 3.4 spots. Dan Williams is a close second, up 3.0 notches.

Down: Combine workout sensation Bruce Campbell drops 4.5 spots. Three mocks have moved him out of the first round altogether. Seven mocks see him going to the Raiders. This may be because they see Campbell as a good fit there, or it may be that the mockers are simply banking on more strange decision making in Oakland. If, for arguments sake, we take out those seven Oakland picks, Campbell's average would drop to 26.2. Would you take Campbell with the 27th pick, or would you trade down?

Note: I always try to fill these mock summaries with the latest, greatest mocks. This means that the twenty mocks in the summary change from week to week. Comparing week to week changes may therefore be a bit dubious, but it gives an indication of what's going on. Just take it with a grain of salt.

With the 27th pick, the Dallas Cowboys choose...

Out of the 20 mocks, Mike Iupati and Taylor Mays fall to the Cowboys four times each, Earl Thomas and Charles Brown twice.

Of the 20 mocks, eight have Dallas taking a safety. 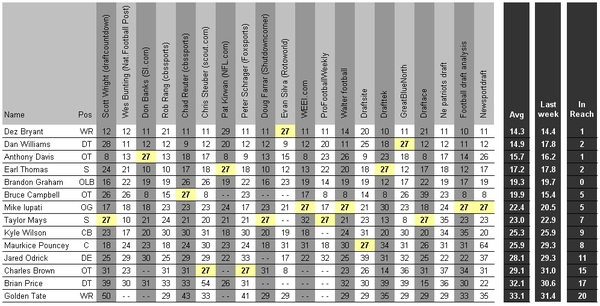