Share All sharing options for: Mocking the Cowboys Draft: Two Weeks To Go

Less than two weeks to go. We no longer have to count weeks. We now start counting days, and pretty soon we'll be counting hours.

In less than two weeks, the Dallas Cowboys will welcome a half dozen or so young players to the family. Some of the names called over draft weekend will become key contributors. Some may become franchise cornerstones.

You’ve done your homework. You've devoured every draft publication you could get your hands on. You’ve scoured the internet for every mock draft and prospect evaluation. You think you've got all your pet cats lined up neatly in a row - and then along came the McNabb trade. All it takes is for one team to mix it up - that includes trading up/down - and all your pet cats scatter like a bunch of pigeons in Central Park.

This week we introduce you to the concept of swarm intelligence and take a look at the players we think received a first-round grade from the Cowboys and how they've fared. Enjoy.

We believe the Cowboys have assigned 25 first round grades on this year's board. If you believe in the concept of swarm intelligence (the collective behavior of self-organized systems without a centralized control structure that can lead to the emergence of "intelligent" global behavior, unknown to the individual agents), then you must assume that the predictive value of 20 mocks is greater than that of a single mock.

Below is a table from 20 different mock sites showing the draft spots they project for these 25 players. The totals on the right show: 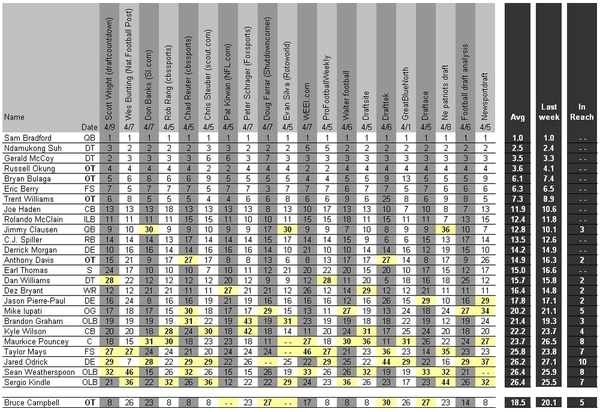 The run on OTs has started: All offensive tackles are up versus last week. Four of the seven biggest risers in our swarm intelligence enhanced rankings are offensive tackles. Trent Williams (+1.7 notches), Bruce Campbell (+1.6), Anthony Davis (+1.4) and Bryan Bulaga (+1.3) are all rising fast, even Russell Okung is up 0.5 spots from an already high 4.1 to 3.6. Interestingly, in the slipstream of these OTs, other OTs like Charles Brown, Roger Saffold and Jared Veldheer are quietly entering the first round in some mocks and pushing first round graded players the Cowboys' way.

Down: In the wake of McNabb's signing in Washington, Jimmy Clausen drops sharply by 2.7 spots, but his fall will likely be cushioned by Buffalo with the ninth pick. Other notable drops: OLB Brandon Graham (-2.2), FS Taylor Mays (-2.0), WR Dez Bryant (-1.7) and CB Joe Haden (-1.3)

Note: The twenty mocks in the summary are the same as the ones from last week (all have been updated) so any bias of using different mocks has been removed from the week to week changes.

With the 27th pick, the Dallas Cowboys select...

Out of the 20 mocks, DE Jared Odrick is available for the Cowboys with the 27th pick ten times. C Maurkice Pouncey (8), OLB Sean Weatherspoon (8), OLB Sergio Kindle (7) and S taylor Mays (7) round off the handful of players most likely to slip within reach of the 27th spot.