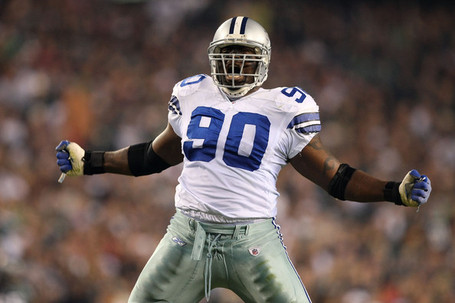 Let's look at the amount of snaps that were played by our Dline last year.  We'll start with the DE's;

A healthy mix here. All four got decent playing time and no-one was overworked.

Now for the NT's;

Folks we need to get someone in here to give the Rat a rest. We need to make a proper investment for a backup NT, someone who can be a contributor not just a big body. Ratliff played way more than any other Dlineman in Dallas, he was 6th in the entire NFL of interior defensive players in workload and it's because the drop-off between him and Saivii is so great that they rarely took him off the field. We can't expect this guy to be our NT on first and second downs and our pass rushing DT on Nickle downs without end year after year. What other NT plays that many snaps? Answer; none.

We all know Rat's a special player and that's why they never take him off the field but wouldn't getting a backup who can actually make plays himself allow us to rest Ratliff a bit more and make him even more effective rushing the passer late in games and late in the year? I think so and I think it should be a high priority in this draft.