Five more days to go. The NFL is reaching it's off-season fever pitch. This is by far the biggest week of the NFL off-season, and the NFL is serving starters on Tuesday with the announcement of the 2010 schedule and following up with the main course on Thursday, Friday and Saturday.

Starting on Thursday, no less than the future of many a franchise will be decided. The Dallas Cowboys will see an influx of new players with great potential. Some of the names called over the weekend will become key contributors. Hopefully a few will become franchise cornerstones. This is where championship teams are built.

25 reasons to pick in the 1st.  This year's Cowboys board assigns 25 first round grades. Which of these 25 players will fall to the 27th spot, and what positions will they be?

Review your mental mocks. Do not force feed a position or positions in your mocks. Look at safety. The Cowboys have names on their board for picks 27, 59, 91 and down the line. Same with offensive linemen. Same with receivers, and so on.

As it stands today, Tom Ciskowski, Dallas' director of scouting, has only six picks to work with. The key will be to hit on at least four players. Where they play is out of Dallas' control, but as long as the Cowboys get four football players, they'll move in the right direction, even if some positions of need go unfilled. And let's be very clear, some will go unfilled. That's just the way drafts work.

Which players are being touted as the flavor of the week, which players have seen their stock plummet, and what names will you need to listen for to know early on if one of the 25 will be in reach? Find out after the jump.

Below is a table from 20 different mock sites showing the draft spots they project for the 25 players we believe have a first round grade on the Cowboys' board. The totals on the right show: 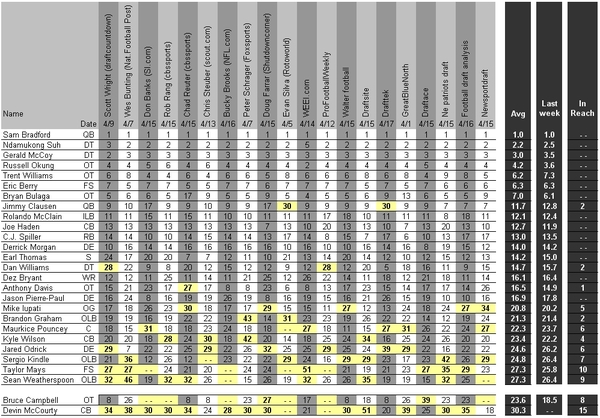 Up: You may have noticed a new name on the list: CB Devin McCourty has quietly been moving up the mock boards for weeks, and is now projected by 12 mocks to be a first round selection. Do the Cowboys like him enough, even though he may not have a first round grade, to take him with the 27th pick?

Outside of McCourty, the biggest risers in this final mock summary were OLB Sergio Kindle and DE Jared Odrick (both up 1.6 spots), closely followed by C Maurkice Pouncey (1.4), QB Jimmy Clausen (1.1) and Trent Williams (+1.1) who somewhat surprisingly knocks Bryan Bulaga out of second place among the offensive tackles.

Down: The mockers have fallen out of love with OT Bruce Campbell over the last week. He drops 5.1 notches as six mockers unceremoniously dump him out of the first round. Other players seeing their stock drop are OT Anthony Davis (-1.6), S Taylor Mays (-1.5) and CB Kyle Wilson (-1.3).

Names to watch out and cheer for

For one of the 25 players with a first-round grade to fall to Dallas, other non-first-round-graded players must be taken before the last one of the 25 is gone. Here's who the 20 mock drafts see as the most likely players to push one of the 25 within Dallas' reach - the number in brackets is how often that player was selected with the 26th pick or higher in the 20 mocks above:

In reach for the Dallas Cowboys with the 27th pick

Out of the 20 mocks, S Taylor Mays is available for the Cowboys with the 27th pick ten times. OLB Sean Weatherspoon (9), OLB Sergio Kindle (7), DE Jared Odrick (6) and Maurkice Pouncey (6) round off the handful of players most likely to slip within reach of the 27th spot.