The NFL Draft by Numbers: Do the Cowboys draft well?

Share All sharing options for: The NFL Draft by Numbers: Do the Cowboys draft well?

By now, you've immersed yourself so thoroughly in all things to do with the draft, little could surprise you anymore. You've scoured all the mocks, you've looked at all the footage you could find, you've read all the scouting reports - and like me, you've most assuredly fallen prey to the NFL's hype machine.

This is the deepest draft ever! Studded with future hall of famers! This draft will turn that franchise around! Tebow a first rounder! All offensive linemen are instant starters! You get the drift.

The truth will eventually come to light, and it'll start with the first minicamps where every team begins to find out whether their draft picks can actually play football.

But is the draft really such a crap shoot? Today we take a quantitative look at some of the Cowboys' recent drafts to find out.

In my recent post Building through the Draft? I showed that there was little to no correlation between a teams' winning record and its roster make-up, i.e. how many players on a team were drafted by that team and how many were UDFAs and how many joined as free agents. But the findings did not answer the questions of whether teams that draft well also have better W/L records.

To answer that question, we will first have to define what constitutes a good draft versus a bad draft. To do that, I will once again the "Approximate Value" (AV) metric developed by Doug Drinen at Pro-football-reference.com (PFR).

In my own words: Approximate Value is an attempt to assign a value to any player at any position for any given year, by weighting position specific metrics (i.e. yards or points scored/allowed) with an indicator for durability (total games played and seasons as their team's primary starter) and quality (Pro Bowl and All Pro nominations) and then normalizing all this at a team level. Read up on it at PFR if you need to know more.

Career Approximate Value (CarAV) then sums up the AV per season for the entire NFL career of a given player. This means that an average player who starts for 12 years could end up with a higher CarAV than a two-time Pro Bowler whose career ends after 5 years.

If you're still with me so far, now would be a good time to prepare yourself for some statistical mumbo jumbo. I've tried hard to make the data visually self-explanatory without going into more mathematical detail than is suitable for an NFL blog. Still there's no avoiding the number crunching if you want to evaluate drafts.

I've chosen to look at the draft classes from 1980 through 2008. This gives me 29 years worth of data, which I think is large enough to draw some fairly robust conclusions from. The analysis covers all 8,321 players drafted in those 29 years, and each one has his own CarAV. 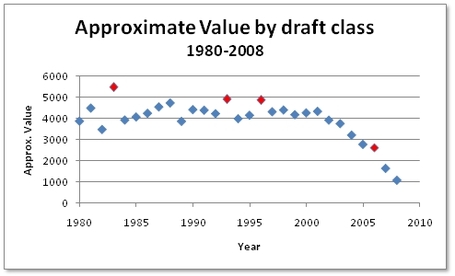 In the graph on the left, I've plotted the total value of a draft class by year for the 29 years we're looking at. You'll notice that the values hover roughly between four and five thousand from 1980 to about 2001, where they then start to decline. The decline is simply due to the fact that the players drafted e.g. in 2005 have an NFL career of 'only' 5 years so far, whereas a player drafted in the 80s could easily have had a 10 year or longer NFL career in which to accumulate AV 'points'. In time, the later draft classes will all move up close to the mean.

I've also highlighted four years in red, which the data says were standout drafts. You've always heard that the '83 draft was the strongest draft in recent history? Well, here's the proof: in terms of AV, the class of 1983 is the best draft class of the last 30 years. Leading the AV rankings are six Hall of Famers, Dan Marino, John Elway, Bruce Matthews, Darell Green, Jim Kelly and Eric Dickerson. The 1993 and 1996 classes also stand out. Four of the top ten players of the class of '96 (Ray Lewis, Terrell Owens, Brian Dawkins and Muhsin Muhammad) are still active as of today, as are many others, so that AV number may still move up. I'll get to the 2006 class a little later.

For these yearly numbers, I've summed up every single draft pick, which means the number of draft picks by year is significantly different, from a high of 336 in '84 and '85 to a low of 222 in '94. If I were to limit the draft picks to only 222 per year, the numbers in the graph would not change significantly, an indication that on average there is little value left towards the end of the draft.

2. The value of recent drafts 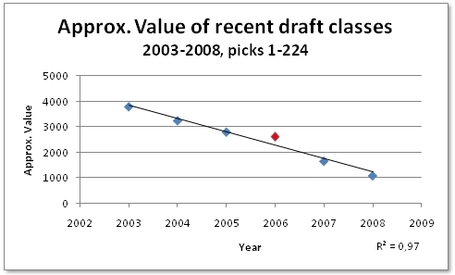 The graph on the right shows the AV of the draft classes from 2003 through 2008. I've excluded the 2009 class from this whole analysis because the values after one year are too low to even begin any type of coherent analysis.

Importantly, to keep these numbers as comparable as possible, I've limited this analysis to 224 picks per year (7 rounds with 32 picks each).

A linear regression (the black line) across these six data points shows two things: A)  an astonishingly high R², meaning that the model is highly accurate, and B) early indications are that the class of 2006 could turn out to be an exceptionally good draft class.

In terms of AV the class of 2006 is already 20% better than the other 5 years along the regression line. The Dallas draft class in 2006? The top four picks were: 1st round: Bobby Carpenter, 2nd: Anthony Fasano, 3rd: Jason Hatcher, 4th: Skyler Green. There is no question that the Cowboys whiffed on this draft. Whiffing and a draft is bad enough, whiffing on a draft that has above average value is even worse.

3. The Approximate Value of each draft pick 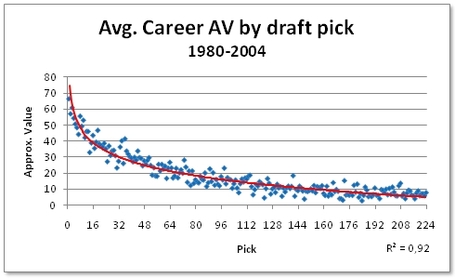 Taking a quarter century of data from 1980-2004 (I left out 05-08 because the low numbers screw up the data too much), and looking at the first 224 picks (the equivalent to 32 picks in 7 rounds), we get the result we see in the graph on left. The graph clearly shows that there is a very high correlation between the Career Approximate Value of a player and the position in which he was picked, and the very high r squared of 0.92 confirms it.

What this data means is that we can now predict, with a fairly high degree of certainty, how high the CarAV of a player will be, simply based on his position in the draft. There is one minor caveat here though. If you look closely, you'll see that at the end of the first and second rounds (around picks 32 and 64), there seems to be a higher level of fluctuation than elsewhere. We will correct for this by doing a regression by rounds.

4. The Approximate Value of each pick in each round 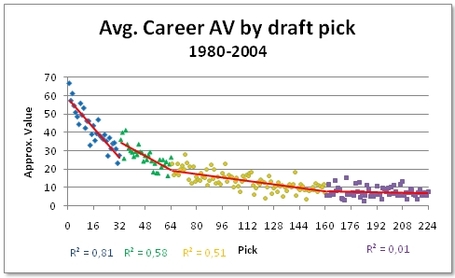 Ok, bear with me here. I've broken down the seven rounds into four chunks, and ran a linear regression against them.

I needed to do this to get a better fix on the value of each pick. You'll see that the angle of the regression line is different by round, most pronounced between the first and second round.

Also, rounds one, two and three-through-five still have a fairly high r squared, but there is no correlation whatsoever between the pick number and the eventual AV in rounds six and beyond (160-244). For round 6 and beyond, the mathematically precise formula is: Sometimes you get lucky, sometimes you don't.

Over 25 years, the average Career AV for the no. 25 pick in the draft is 27 AV points out of a total of 1,340 AV points for the first 32 picks in a draft, or 2.5%. Now let's take the no. 25 pick in 2008, the Cowboys' Mike Jenkins. The first 32 picks in 2008 have a combined Career AV of 387 so far. 2.5% of 387 are 9.6 AV points. Mike Jenkins has already accumulated 10 Career AV points. Dallas has therefore gotten 0.4 more points for this pick than could have been historically expected. The 'Draft Success' for Dallas is therefore 4% (0.4 divided by 9.6). The positive 'Draft Success' percentage means Dallas so far has gotten slightly more value than they could have historically expected from their 25th pick.

By looking at 'Draft Success' in the way described, I can tell how good each team was at maximizing the draft picks it had available. Draft Success does not evaluate how many picks a team had, simply how efficient they were in getting value for the picks they did have. Similarly, it doesn't matter which slots a team had in a draft. By only comparing the same slot numbers, it doesn't matter if you had the first or tenth pick.

Finally, I didn't adjust what percentage of the player's career value was accrued with the team that drafted him. The Cowboys get full credit for drafting Anthony Fasano (incredibly, the player with the best AV out of Dallas' 06 draft class), although he's playing for Miami now.

So without further ado, here are the ten Dallas Cowboys drafts from 1999 through 2008: 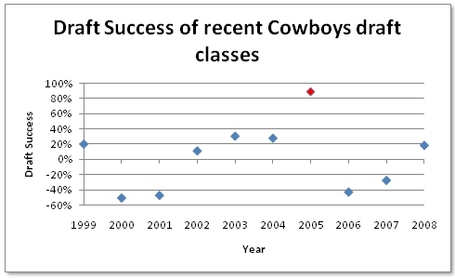 The figures here should not come as a big surprise for anybody familier with the Cowboys' recent drafts.

The 2005 class with DeMarcus Ware, Marcus Spears, Marion Barber, Chris Canty and Jay Ratliff is a stand-out draft any way you measure it.

The 2004 class may seem a bit surprising given that the Cowboys did not have a first rounder that year, but relative to the picks they had, the Cowboys actually did a pretty good job of getting value for their money.

Do the Cowboys draft well? The Cowboys had a positive Draft Success number in six out of the ten years I looked at. That's tied for sixth in the NFL with five other teams. Not bad at all. It's when they miss that they miss badly.

All will be revealed in the next and final part of this NFL Draft by Numbers series in which we'll look at how Draft Success correlates with winning across the whole NFL.