The Bossness of David Buehler

Share All sharing options for: The Bossness of David Buehler

The last guy on a football team you'd want by your side when you plan on some serious tail kicking  would be ... the kicker. No more. My kicker will kick you kicker's tail anytime, and without breaking a sweat.

Kickers aren't required to lift at the NFL Combine, but Buehler did. He bench pressed 225 pounds 25 times in a row and ran a pair of unofficial 40-yard dashes in 4.56 and 4.63 seconds.

Only one tight end and one linebacker posted a faster 40-yard time this year than David Buehler's unofficial 4.56.

In training camp in August, Buehler ran a 50-yard sprint against 5th- round pick defensive back DeAngelo Smith - and won. Smith is currently with his fourth NFL team, the Lions.

In mid November he fractured a toe on his foot but continued to boom the kickoffs into the sky like nothing had ever happened.

Ok, so that's all pretty impressive - but what about, well, his kicking? It is high time we looked at Buehler's performance in a little more statistical detail.

The official NFL stats show that Buehler had 77 kickoffs in the 2009 regular season, recorded 29 touchbacks (ranked first in the NFL) and averaged 67.4 yards per kickoff (ranked 6th among regular kickers in the NFL). The Cowboys as a whole allowed only 20.6 return yards after kickoffs (ranked 7th in the NFL).

But as the old saying goes, never trust a stat that you didn't fake yourself - so here's where we break down all that back and forth kicking that happened in the 16 regular season games last year.

The first thing we need to do is look at 'net kickoffs' - by excluding onside kicks (OSK) and kickoffs that are purposely kicked short to run out the clock at the end of a half (EOH).

Why do we need 'net kickoffs'? Because only by excluding OSKs and EOH kicks can we accurately compare Buehler's average kicking distance with that of opposing kickers. The difference in the number of kickoffs in the table above is simply because the Cowboys scored more often than their opponents.

On 72 kickoffs, David Buehler averaged 70.2 yards (for those keeping track, the median is 70 yards). This means that, on average, every one of Buehler's kickoff landed just inside the end zone. On their 56 kickoffs, the Cowboys' opponents averaged 67.7 yards (median 69), a mere 2.5 yards less than Buehler.

But the critical difference is that 64% (46) of Buehler's kicks landed on or beyond the goal line, while opponents achieved only 45% (25). Here's how the figures compare:

Buehler's kicking game is clearly better than that of the Cowboys' combined opponents. But there is one additional factor that may have helped Buehler achieve his NFL leading number of touchbacks: Cowboys Stadium.

Here's a look at how the numbers above split by indoor- and outdoor games:

Playing indoors has definitely been beneficial to Buehler's kicking game, but it's not like he has been a slouch outdoors either - he has outperformed opposing kickers regardless of where the games were played.

But is there more?

We already saw some trickery on one onside kick where both Buehler and Nick Folk lined up, but is there more to come? Could the Cowboys use him to run trick plays on punts - he'd certainly have the speed and athleticism to pull it off.

And what about some rugby-style punt misdirection: he starts running with the ball, and if the defense plays him, he punts it forward, if not, he runs with it? Or have I been playing too much Madden 10?

And finally, will he be able to consistently kick field goals as well? The Cowboys recently hired former kicker Chris Boniol as his personal kicking consultant, here's keeping my fingers crossed that that move will pay dividends next season. 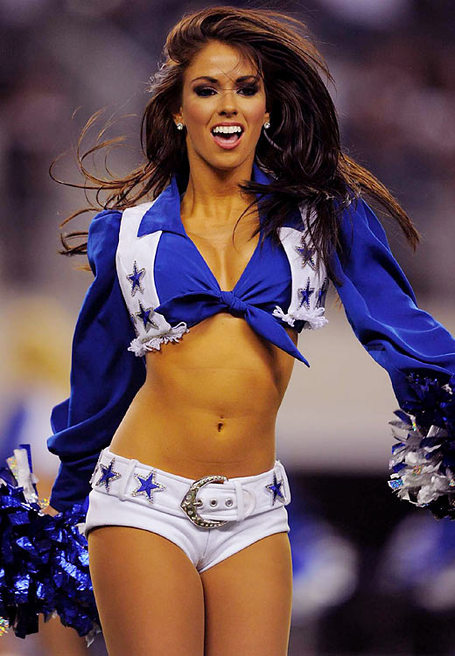