The NFL Draft by Numbers: Do drafts build championships?

Share All sharing options for: The NFL Draft by Numbers: Do drafts build championships?

In one of my last posts, I wrote that "starting on Thursday, no less than the future of many a franchise will be decided. The Dallas Cowboys will see an influx of new players with great potential. Some of the names called over the weekend will become key contributors. Hopefully a few will become franchise cornerstones. This is where championship teams are built."

In hindsight, it's pretty obvious that I swallowed the NFL hype hook, line and sinker. Or did I?

If the draft is all it's cranked up to be, then surely there must be a correlation between draft success and winning in the NFL. In the last NFL Draft by Numbers post we saw that we could calculate an expected value for each position in the draft and compute a figure describing the draft success of each team in the NFL. A question left unanswered was whether teams that draft well also have better W/L records.

In my last post I painstakingly led you through the draft numbers and analysis to establish how to calculate Draft Success. So today we'll skip that whole part and jump straight in.

'Draft Success' basically measures how successful a team was relative to the historic NFL average in getting value from its draft picks, regardless of how many and which picks it had. As such, Draft Success is an indicator of a franchise's ability to evaluate and pick talent. It is not a measure of a team's ability to retain talent, as the accrued value of a player stays with the team that drafted him, even if the player has moved on.

Draft Success and winning in the NFL: the last decade 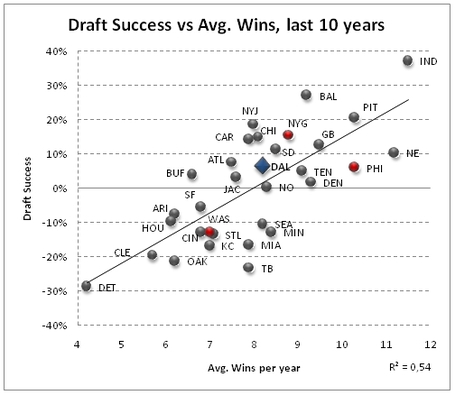 This graph plots the Draft Success numbers from 1999-2008 against the wins from 2000-2009. Why the difference in years? Firstly, because with a few notable exceptions, the bulk of rookies in the NFL don't see all that much playing time in their first NFL season. So the effect of a good or bad draft class will usually begin to take effect a year later.

The second reason is that it makes more sense statistically. The slight shift by one year moves r² up to 0.54 from 0.41, and that is significant.

As you look at the graph, ask yourself if it feels right. If it does, then we're on to something, and I think it does. Indy feels right at the top, but the Colts' numbers are remarkable nonetheless. Not only have they outdistanced all other NFL teams in terms of Draft Success, but they've done it despite picking towards the very end of each draft round in eight out of ten years.

While the Patriots and Eagles have a reputation as good drafters, the numbers suggest that they've actually been quite shrewd at bolstering their roster with free agents.

Dallas sits somewhere smack in the middle, and when you think about the last decade of Cowboys history, that feels about right. The other NFC teams are highlighted in red, the Redskins are notable both for their poor draft success as well as for their inability to emulate either the Patriots or Eagles with a winning free agent strategy.

Little to no surprises at the bottom. Cleveland, Tampa, Oakland and Detroit are the teams almost everybody would have expected there.

There's another interesting dynamic in the graph: Teams that do not draft well (read: that have a negative Draft Success number) appear unable to move past the 8 win barrier in the graph. On the other hand, teams that have drafted fairly well, like the Jets, the Panthers and the Bears, do not get an automatic free pass to 8+ wins.

But perhaps a time frame of 10 years is just too long to look at in the NFL. After all, remember which teams met in the Super Bowl in 2002? The Raiders and the Buccaneers. Sad but true. So let's look at the same chart, except we'll narrow it down to the last five years.

Draft Success and winning in the NFL: the last five years 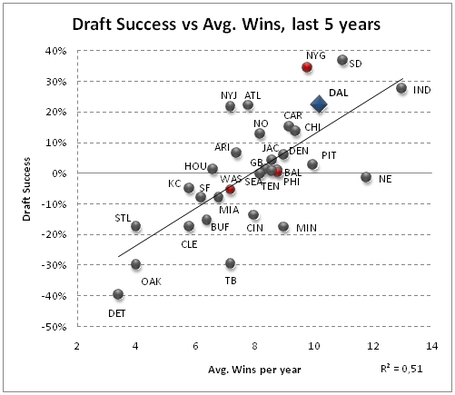 The overall picture here doesn't change too much, but there are some details worth noting.

By virtue of an outstanding draft class in 2005 (see also Raf's post How the Cowboys won the '05 Draft) the Cowboys move up the Draft Success ladder significantly. Pure coincidence that they also move up the W/L ladder by two wins? I think not.

I was surprised to see the Giants so far up, but they had two very good drafts in 2005 and 2007. And weren't they Super Bowl champions a while back too?

New England quietly moves into negative Draft Success territory. Four out of their five last drafts have a negative value.

Another way to look at this chart is to find out which teams seem poised to dominate the next couple of years on the strength of the talent they've recently drafted. Look at the top right hand corner of the graph and you'll get a pretty good idea who those teams might be. Teams like the Jets and the Falcons have also drafted efficiently over the last five years, and it may just be a matter of time until the wins follow.

The danger with looking at a 5-year time-span like this is of course illustrated by the Cowboys' 05 draft: Once that draft is taken out of the equation, the Dallas draft record suddenly looks a lot worse. So what should the Cowboys do about that? Make the 2010 draft the best in franchise history, of course. And Approximate Value has provided us with the secret to draft success, free of charge:

Why trading down may be in the cards for Thursday 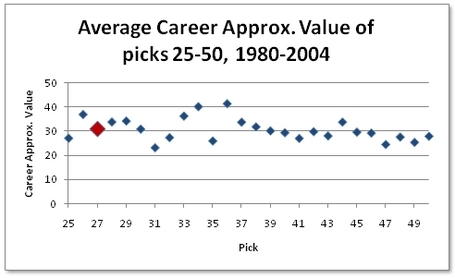 The problem with looking at a huge amount of data, as I did in the first post on this topic, is that you lose a a lot of granularity at the individual pick level.

BTB member quincyyyyyy noted previously that "the value in the early second round teeters off after pick 48. So those first 15 or so picks in the second is where Jerry should look to move back."

The graph on the left plots 25 years worth of the historic Approximate Value of each draft pick in a lot of clarity. Notice that in terms of Approximate Value, there's not much difference between the 27th and the 50th pick. Sure, there are some ups and downs, especially in the early thirties, but essentially this is where you'll find most of the second-round graded players, and there's not all that much fluctuation in value.

Now, keep in mind that this is historic data and it may or may not repeat this year. But if there's no first-round graded player left at 27 that the Cowboys are interested in, Jerry Jones might well trade down. Chances are he'll get the same value a couple of spots further down. Plus there's an extra pick or two in it as well.

But careful though, these things work well with 20/20 hindsight, but war room reality is very different. Just give me four ballplayers, Jerry, and I'll be happy.