Digging Deeper Into The 2010 NFL Schedule

Share All sharing options for: Digging Deeper Into The 2010 NFL Schedule

When the 2010 NFL schedule was released last week, the only thing that really made any significant news for the Cowboys was the fact that Dallas has the third toughest strength of schedule in 2010. But there's much more hidden in that schedule, and not just for the Cowboys.

Here's a visual overview of some teams that look like they have every right to complain about a tough schedule, and others that look to have fairly soft schedules. (Click for larger image). After the jump, we break down the schedule a lot further for every single NFL team. 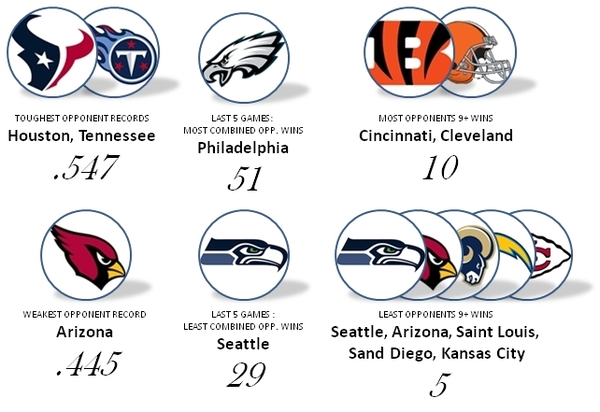 Volatility and Strength of Schedule (SOS)

At the start of last season, the Cowboys had the 11th toughest SOS with .516. By the end of the season the actual SOS had mellowed to .488, and Dallas ranked a comfortable 23rd. The biggest winners in the SOS lottery: The Saints, who dropped from 0.557 to 0.426. The biggest losers: The Ravens, who started with a seemingly manageable 0.437 and ended up with 0.523. The average swing in SOS per team last year was 0.042 points.

And it's almost certain to happen again this year. The 'real' SOS at the end of the season will have little to do with the SOS published at the start of the season, and the reason is the volatility in team performance from year to year.

December and January: One thing that we all saw when we initially looked at the schedule was that December and January could be tough again for the Cowboys, as they'll face the Colts, Cardinals, Redskins, and the Eagles twice in that span. In fact, when you look at the combined opponent wins for the last five games, only Philly has a tougher stretch, because not only do they have to play the Cowboys twice, their opponents for these five games combined for 51 wins last season. The Cowboys rank second with 50 opponent wins. I can already see the December headlines from here.

Remember how everybody and their uncle was swooning last season over the Chargers and how great their December record was? Prepare to hear the same stories again. The Chargers' last five opponents combined for only 35 wins last season. Joining the Chargers in riding out the season in relative comfort: the Packers (35), Vikings (34) and Saints (32).

Easy starts: The Rams get a break to start the season, with their first five opponents combining for only 26 wins last season. Teams that could reasonably be expected to jump to a fast start due to a soft schedule in the first five games: Packers (30 combined opponent wins in first five games), Chargers (31) and Eagles (32). The Cowboys first five opponents combined for 40 wins last year, which sounds manageable, but the fifth game is a rematch against the Vikings.

Quality opponents: Another way to understand just how tough a schedule a team may be facing is to look at the number of quality opponents (teams with nine or more wins in the 2009 regular season). The Bengals and the Browns have their work cut out for them as they both face a league high 10 quality opponents. The Cowboys are in the middle of the pack with eight quality opponents, while five teams face only five quality opponents: the Chargers, Cardinals, Rams, Chiefs and Seahawks. The Chargers? Again? I'm beginning to notice a trend here.

Away schedule: Last but not least, strength of the away schedule. Even a brief look at the Cowboys schedule quickly revealed that there were some pretty tough away games on there. And the numbers bear it out: The Cowboys have the toughest away schedule of any team in the league, with an opponent combined winning percentage of 0.617.

2010 Schedule under the Microscope (click column header to sort)

The table is a useful indicator as you think about the upcoming season, and which teams you think may be early favorites for playoff spots.

Will the Chargers storm largely unchallenged to a division title, only to be one and done in the playoffs again? Given their extremely soft away schedule, are the Jets favorites for the AFC East title? Will the 49ers take the NFC West?

Is it better to be battle tested (like all NFC East teams) as you enter the playoffs, or is it better to go in rested from a soft schedule?

Based on this schedule, which six teams are unlikely to make it back to the playoffs in 2010?