Share All sharing options for: Mocking the Cowboys Draft: Three Weeks To Go

Three more weeks to go, and it's time to face some hard facts: As a predictor of which players are going to which teams, mock drafts aren't particularly accurate.

Mock drafts can still be fun though, and the ones that come from analysts who know their stuff can still give us a general sense for where a player fits on the draft boards. But as an indicator of exactly which player goes to which team, they're not very accurate.

All it takes is for one team to mix it up - that includes trading up/down - and the rest of the mock is thrown off.

To paraphrase Dan Patrick from Si.com, there also some other reasons why these mocks may be inherently inaccurate:

Regardless, mock drafts are fun because they focus attention on players or positions that we can sit around and endlessly talk about. Because that's what we do, especially in the offseason.

This week we look at the players we think received a first round grade from the Cowboys, and which of these might still be available with the 27th pick. Enjoy.

Below is a table from 20 different mock sites showing the draft spots they project for these 25 players. The totals on the right show: 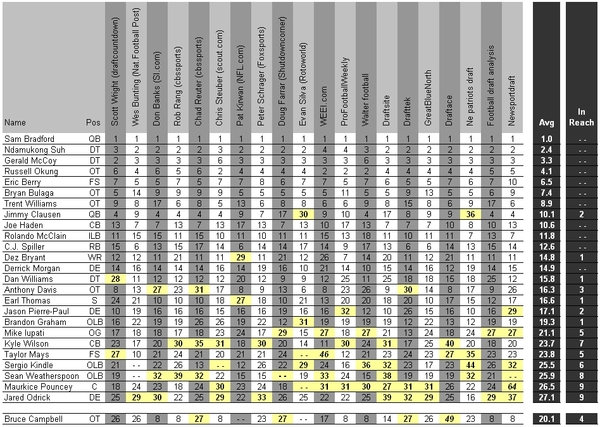 The Curious Case of Bruce Campbell

Bruce Campbell is one of the most notable absentees from from the Cowboys' 25 first rounders list, but I've included him in the table anyway, simply because opinions are split pretty widely on him.

In a strange twist to this year's draft, it appears that Bruce Campbell’s outstanding Combine performance has actually hurt his draft stock. Widely considered a top prospect just a few months back, he is now being labeled a 'workout warrior' and many draftniks have dropped him faster than a hot potato. Most of the remaining draftniks automatically assume that that type of combine performance will get you drafted by the Raiders in the 8th spot. Go figure.

Would you take Campbell if he was still available in 27th or would you trade down?

With the 27th pick, the Dallas Cowboys choose...

Out of the 20 mocks, OC Pouncey and DE Odrick are available for the Cowboys with the 27th pick nine times. OLB Weatherspoon (8), CB Wilson (7), OLB Kindle (6), S Mays (5) and OG Iupati (5) round off the half dozen players that may slip within reach of the 27th spot.