In the two previous posts on the O-line pass protection we looked at sacks by direction and sacks while blitzed for the O-line as a whole. Today we take the analysis a step further and look at the individual players on the O-line. From a stats point of view, this is a daunting task. Consider the following:

In 2009 the official records show that the Cowboys had 550 pass attempts on offense. With 5 men on the line, there were 2,750 man-plays through the regular season. How many of these man-plays are recorded in the official NFL stats? Not a single one. In fact, the only stat the NFL keeps on O-line players is games played and games started.

Part of the reason for that is that it is very hard to objectively quantify the performance of linemen. Take the example of Jay Ratliff (I know, he doesn't play on the O-line, but at least his tackles get recorded, so bear with me here).

Todd Archer reported that the Cowboys coaching staff credited Jay Ratliff with with 83 tackles, seven sacks and 33 quarterback hurries. NFL.com credits Ratliff with 29 tackles, 11 assists and six sacks but doesn't record hurries. Pro-football-reference.com show the same number of tackles and sacks but strangely give him one assist less. Profootballfocus.com (PFF) recorded him with 25 tackles, seven assists, six sacks, five QB hits and 15 QB pressures. So who's right? They all are.

Back to our O-Line. After the jump we look at the metrics for each each player, taking great care to maintain the integrity of each statistical universe we visit, we look at Alex Barron and what the stats have to say about him and dispel the myth that Doug Free underperformed in the Vikings game.

We know that the coaches grade every player and hand out grades at the end of the season. Unfortunately, we don't always know what those grades are. So we try to arrive at our own grades. You can start with a very broad approach like Calvin Watkins did in his Cowboys Offense Report Card, and grade each player according to a methodology known only to yourself:

Besides the unknown methodology, another issue with this type of grading is that it is not comparable to players on other teams. If Gurode graded out with an B, where does that place him among centers in the league? Is he in the top 5? Or the Top 10? Or at least above average? Let's see what other data sources tell us about that.

The main thrust of pass blocking is to keep the defender from making what NFL scouts call splash plays. Splash plays include sacks, offensive holding penalties, knocking passes down at the line of scrimmage and hitting the quarterback while he is passing. The fewer of these an offensive lineman allows, the better.

We'll have to wait until KC publishes his "Scientific Football 2010" to get the full benefit of his analysis, but there are other sources that already come pretty close to his definition. PFF in particular break down the O-line performance by sacks, QB hits and QB pressures allowed. PFF's Khaled Elsayed has developed a specific metric based on this data called Pass Blocking Productivity, or PBP (Special hat tip to Khaled for personally providing me with some of the data points for this).

PBP tries to measure how much pressure a lineman gives up per offensive snap. In Khaled's own words:

We added up all the sacks, hits and pressures an offensive lineman gave up (hits and pressures are valued at 0.75 the value of a sack in accordance with our gradings). We then divide this number by the total number of snaps in pass protection before multiplying by 100 to get a solid number. A little something like this:

[Note on the data. NFL Rank: among players at position with > 25% snaps for their team. Better Than: shows how many of the players at a given position rank below each player. Snaps: number of times the player stayed in to block a pass rusher, includes sacks and penalties.]

In a previous post (Inside the run blocking game) we already saw that the Cowboys had one of the best run blocking O-Lines last season, but the O-line as a group struggled slightly more in pass protection.

There is little surprise in seeing that Flozell Adams graded out as the weakest player in terms of PBP. What does come as a surprise is that Andre Gurode, despite a low overall PBP, grades out towards the bottom of the list of centers.

But is it even fair to compare the 5 positions along the line with each other as I did in the table above? Perhaps not. Here's how the averages for all players with >25% of a teams' snaps compare by position. I've normalized the averages to the equivalent of 600 pass blocking snaps:

The pressure is bigger on the outside, no big surprise there, but it does show that it is not a given that the left tackle on the team always has to give up the most sacks. In fact, if we look at the two sacks Colombo and Free gave up on the right side during the regular season, that is a pretty good number. Now if we stay with the logic from the table above, where on average both tackles give up the same amount of pressure, the Cowboys O-line had a significant imbalance in pass protection. 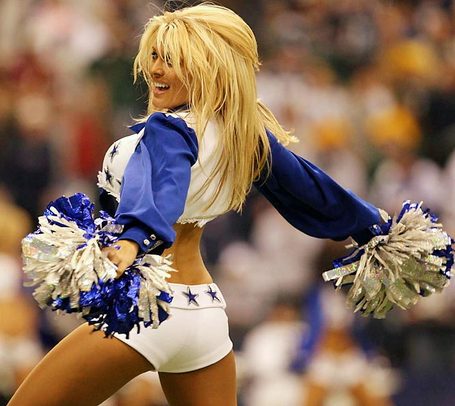 via i.cdn.turner.com: Back to business now.

In terms of the raw stats, Alex Barron compares favorably to Flozell Adams, but only marginally. Given that the Cowboys cut Adams, this is not exactly a ringing endorsement.

But in this case, the pure quantitative data is only part of the story. According to PFF's grading methodology, Barron received a -23.7, significantly lower than Adams' -8.8. Only three left tackles in the league graded out worse. Which brings us back to the point of the different statistical universes. Jerry Jones said: "We had a very good grade on him [Barron] in our pro scouting" which is the diametrical opposite to any stat I could find. Let's hope that when these stat universes meet in training camp and possibly on the playing field, we will not witness a cataclysmic rip in the space-/time continuum.

For some reason there is common misperception that Jared Allen ran all over Doug Free in the Minnesota game. Here's what the numbers say: Doug Free gave up 2 QB pressures in the Vikings game in 40 snaps. No sacks and no QB hits.

Marc Colombo on the other hand gave up two sacks, two hits and six pressures in a disastrous outing. Consider that in the 544 snaps before his injury in Week 10, Colombo gave up only one sack, three hits and 13 pressures. In his two playoff games, he gave up a combined three sacks, three hits and nine hurries.

Clearly he was not ready to play yet. In the Vikings game, he would almost certainly have been replaced by Free, but Free had already come in to replace an injured Flozell Adams. So much for that.