There is an old saying that states that the game of football is "one-third offense, one-third defense and one-third special teams." That may not be mathematically accurate, but since we've looked at the defense in Part I of our virtual look into the Cowboys' film room and examined the offense in Part II, we'll conclude the series with a look at special teams.

Special teams are an often under-appreciated part of a football team - yet many future starters began their careers on special teams. Being able to contribute on special teams may be the difference between making the 53-man roster and, well, not making it.

But special teams aren't just a proving ground for young talent, they're also a critical part of the overall battle for field position. Yet outside of the kicker and the returner, special teamers are virtually invisible, as are their stats, apart from return yards and the occasional tackle here and there.

That's why a look at special teams via game-tape based stats can be highly enlightening. Obviously, we do not have the grades the Cowboys handed out for special teamers, but we do have access to a data source that does a similar exercise for all NFL teams. In their own words: "Profootballfocus.com analyze and grade every player on every play in every game to provide you with the most in-depth statistics you can find anywhere outside the team's film room". After the jump we 'peek' into the Cowboys' film room using profootballfocus.com's data.

For those of you unfamiliar with the Profootballfocus.com (PFF) methodology, please refer to Part I of this series.

Note on the data: I've removed the penalties from the overall ratings as I felt they were weighted far too heavily in the overall score.

What you'll see for each player below is his rank relative to all other NFL players at that position, a "better than" number which tells you that the player ranks better than xx% of the players at his position in the league and his PFF ratings (overall score and a breakdown by specific areas).

Green is good (positive), yellow is about average and red is bad (negative). The higher the positive grading the better the performance and vice versa.

Special teams have their own rules, and it's no different with the PFF numbers. From what I understand, all players who are not the kicker/punter or returner are only graded by PFF if they are directly involved in the action, e.g. if they make or miss a tackle or cause a penalty. This is due to the way the networks cover special teams: the cameras are only where the action is.

The ranking data below is limited to players who were graded in at least six games for their teams last season, as these would most likely be the core special team contributors, not just the occasional player helping out. This approach weeds out the one-hit-wonders on special teams, but it unfortunately also excludes core special teamers like Steve Octavian who just weren't involved in enough offensive or defensive plays.

Within the limitations laid out above, here's what the data says: Dallas had three special teamers who stood out last season in Alan Ball, Victor Butler and Sam Hurd. Ball is likely to take over the safety spot vacated by Ken Hamlin, Victor Butler's place on the 53-man roster is virtually guaranteed based on his ST play and promising glimpses on defense. If Sam Hurd decides to stay, he would likely win out versus another equal receiver based on his ST play.

Steve Octavian and Curtis Johnson also rated above average, both with a 1.5 overall score, but they were 'only' graded in 3 and 2 games respectively.

At the bottom of the table, Bobby Carpenter did record 7 ST tackles but PFF did not judge these particularly distinguishing. Pat Watkins is credited with 6 missed tackles, more than any other of the 213 special teamers. The coaches will have to weigh Watkins' misses against the tackles he did make as well as Carpenter's overall impact, but purely based on the numbers, I would assume that the chances of either player making the 53-man roster are slim.

No surprises here. David Buehler was good at kickoffs but unfortunately not an option as the place kicker. Perhaps hiring Chris Boniol as a kicking consultant is paying early dividends, because the Cowboys have not been active on the kicker front. While Leigh Tiffin and Hunter Lawrence seem to have signed with Cleveland and Tampa respectively (hat tip to TexaninNYC and JoeyJoeJoeJr.Shabadoo for pointing that out ), there still are a lot of unsigned kickers out there, so in this case perhaps no news is good news.

Suisham's number's in the table above include his Washington numbers. In the end they were indicative of the performance that the Cowboys got from him, which was marginally better than Nick Folk's.

After his season ending injury in 2008, Matt McBriar is back in fine form as one of the best punters in the game today. But let's not spend too much time here, I don't want to jinx the guy.

If you're really honest, the Cowboys had an average return game at best. Yes, Crayton did return two punts for touchdowns, but there wasn't much else going on apart from that. To my untrained eye, Felix Jones for some reason seemed tentative on kickoff returns, perhaps because of his knee injury, and it shows in his numbers.

With Dez and Akwasi, the Cowboys now have arguably two of the best college return men on the team. We'll see if these numbers improve.

If we look at the totality of the player grades across offense, defense and ST, they do provide a fairly clear roadmap of the Dallas Cowboys' off-season moves so far. Granted, armed to the teeth with the benefit of hindsight, you can make any collection of stats look prophetic, and I'll be sure to review these numbers again at the end of next season and try to make a prediction that can actually be tested. 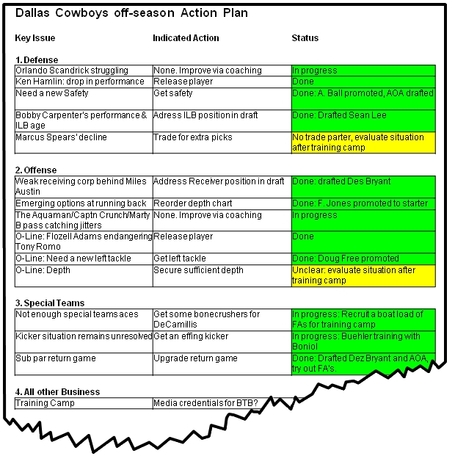 Based on the game tape grades that we've looked at in all three posts, it would appear that there are only two open items left on the Cowboys' off-season action plan: Deciding what to do with Marcus Spears and getting more depth for the O-line. Both are likely to be addressed during or after training camp.