The Cowboys have signed 18 undrafted free agents so far this year. Dave and Aaron have put together a brief profile on each of these UDFAs (The Final List of UDFAs), and late arrival Scott Sicko has also been extensively discussed on this board.

Like every year, these players will fight hard and give everything they have to make the final 53 man roster of the Dallas Cowboys. Like every year, most of them will not make it. Realistically, the UDFAs are battling for a spot on the practice squad, and even that option will be out of reach for most of them.

These guys will play their hearts out, subject their bodies to tremendous physical abuse and go through enormous mental stress every time the roster sizes are reduced, first to 80 men, then to 75 and finally to 53.

Have you ever wondered how much they get paid for this?

Before we get into the details of how much they get paid, let's look at what could potentially await them, if they make the final roster.

Below are the salary values of last years' Cowboys rookie class, split by 2009 base salary and signing bonus as per the USA Today NFL Salary database.

All the rookies who made the Cowboys' Active/Inactive List (basically the 53 man roster plus players on Injured Reserve and Physically Unable to Play) were signed to the rookie minimum contract with a salary of $310k and were given a signing bonus largely determined by which spot they were drafted in.

So making the 53 man roster is financially more rewarding than making the practice squad. No big surprise there. But how much to the players make on their way to one of these roster spots? Here's where we break it down.

Unsigned 2010 draft picks sign a free agent contract that automatically tenders them to a rookie salary of $320,000. But there's a catch. NFL players only get paid during the regular season. Base salaries (Paragraph 5 salaries) in the NFL are paid in 17 installments over the course of the regular season. Not before. If you're an UDFA looking to get rich quick, the NFL probably isn't the best place for you.

Once a rookie free agent signs a contract, he usually receives a small bonus. These bonuses are mostly in the $3,000 to $5,000 range, but if a particular free agent is heavily sought after by a number of NFL teams, that bonus may go up as far as $20,000.

Signing bonuses, as the name implies, are paid out immediately after the contract is signed. After that, the UDFAs have to make do with "per diem expenses".

All players attending an off-season workout or minicamp, like the one last week, get a per diem of up to $130 per day. All this is provided as per the NFLPA contract and is the standard procedure that's designed partly to provide the players some remuneration, and partly to avoid teams outbidding each other for rookie free agents.

NFL Collective Bargaining Agreement (CBA), Article XXXV, Section 3: "Payment: Each player shall receive at least the following amounts per day for any workouts or classroom instruction in which he participates pursuant to a Club’s voluntary off-season workout program: $130 for the 2009-10 League Years."

Additionally, all players receive room and board during these activities.

Once training camp starts, all rookies (drafted and undrafted) get per diem payments at the rate of $825 a week, which isn't that bad considering that housing and meals are provided by the Cowboys. Veterans get slightly more at $1,225 a week. These payments end one week before the regular season opener, and base salaries then commence in 17 installments over the course of the regular season.

"Rookie Per Diem: A rookie player will receive "per diem" payments at the rate of $825 per week in 2010, commencing with the first day of pre-season training camp and ending one week prior to the Club’s first regular season game"

If they make the 53 man roster, the UDFAs get the rookie minimum of $320,000 or 1/17th of that as a check every week, as long as they keep their roster spot. Additionally, they may get a small ('small' relative to the base salary) signing bonus, but this will be lower than the bonuses received by the drafted players.

CBA, Article XXXIV, Practice Squads: "Minimum salary for a practice squad player shall be $5,200 per week for the 2008-10 League Years."

The upside of the practice squad is that if a player is called up to the 53-man regular roster, either by his own team or by another team, he automatically signs a contract with the $320,000 minimum salary. Also, three weeks of that contract are guaranteed (3/17th of $320,000 = $56,000), even if that player is released, waived or traded before the three weeks are up.

All contract situations outlined above come with standard NFL insurance and buyout provisions should a player get injured. 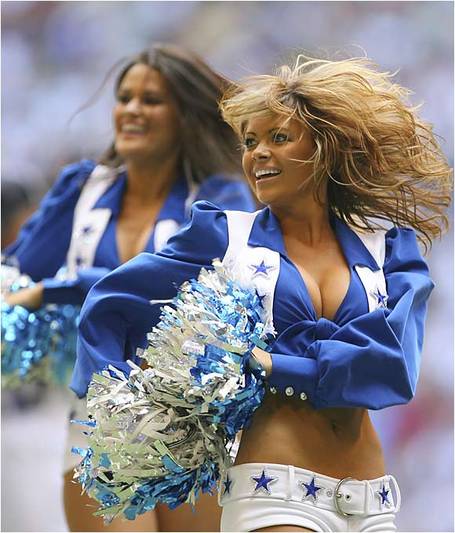 This may come as a shock to the UDFAs, but one of the strictest NFL cheerleading rules is 'no fraternization' with players - no flirting, no personal relationships, no nothing.

Typically, you'd have better luck getting to know an NFL cheerleader as a blogger on BTB than as a football player for the Cowboys. My friends, this is the best news of the offseason by far!