Passer's Paradise: The Evolution Of The NFL Aerial Attack

Share All sharing options for: Passer's Paradise: The Evolution Of The NFL Aerial Attack

An NFL record 10 quarterbacks and 12 teams passed for more than 4,000 yards last season. Thirty years earlier, in 1979, Dan Fouts became only the second quarterback after Joe Namath of the pre-merger AFL Jets in 1967 to surpass the 4,000 yard barrier under Coach Don "Air" Coryell.

And it's more than the passing yards that are up versus a generation or two ago. Today's NFL quarterbacks have reached an unprecedented level of effectiveness. Is this because of improved nutrition? Or better equipment? Protein pickles?

The answer, my friends, is waiting in the stats, specifically in the passer rating.

The passer rating was initially presented by Don Sm 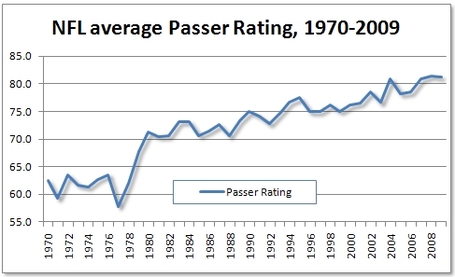 ith in 1973, then working for the Pro Football Hall of Fame, and has been used ever since. For all its criticism, it is widely recognized and used as the measure for passing efficiency.

The graph on the right shows the development of the league-wide passer rating since the merger in 1970. From an average in the low sixties in the early years of the merged leagues the passer rating has climbed to an average QB rating of slightly above 80 in the last couple of years.

After the jump we break down the passer rating and look at external factors to try and gauge what has caused this significant increase in passing efficiency. 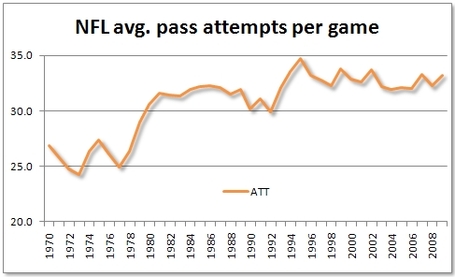 The efficiency measures that make up the passer rating are all expressed as a percentage of total pass attempts.

To understand the increase in the passer rating, we first need to understand whether the pass attempts have gone up, down or remained stable.

The graph on the right plots the average pass attempts per game in the NFL between 1970 and 2009.

Looking at these numbers on a per game basis is important, as it corrects for the effects of league expansion, number of games played per season or strike shortened seasons.

Completions and yards per attempt 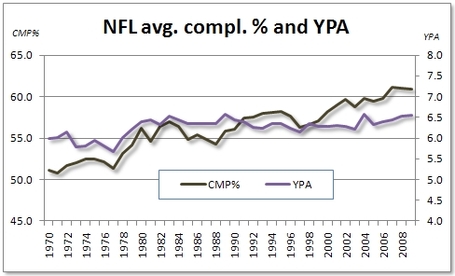 Firstly, the average completion percentage in the league has been steadily increasing over the last forty years, steadily climbing from about 50% to values above 60% in the last three seasons.

Secondly, the average yards per attempt increased slightly at the end of the seventies, but have remained basically flat at about 6.5 throughout.

In summary, this means that QBs in the league are not throwing longer passes. In fact, since the completion rate is up and the YPA is basically stable, the average length of each completed pass has actually declined somewhat. We'll examine some of the reasons for that later in the post, for now let's complete the look at the passer rating by looking at INTs and TDs. 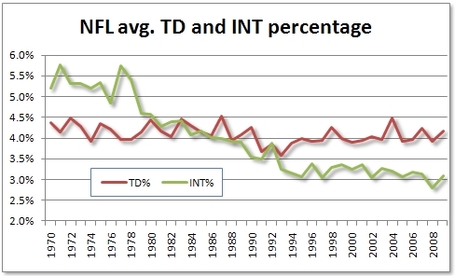 The passer rating has a built-in aversion to interceptions. However, the formula is designed in such a way that you can make up for an interceptions by throwing more touchdowns. Or you could simply cut down on the number of interceptions you throw.

Tony Romo did a very good job of that last season, and from the looks of the graph an the right, so have the NFL quarterbacks over the last forty years.

In the 1970s, quarterbacks on average were being picked off at a rate of around 5.5%. That's about once every 18 pass attempts. In 2008, that number dropped below 3% for the first time (2.8%) in league history. That's almost half the rate of interceptions in the 1970s, or about one interception per 33 pass attempts.

Granted, as we saw earlier, the number of pass attempts per game has increased as well, so the average number of interceptions per game 'only' came down from 1.5 to 1.0, but that is still a key driver for the improved passer rating.

Of note, the average rate of touchdowns has remained basically flat over the last 40 years.

So now we're a lot clearer on how the the passer rating improved over the years: a better completion rate and less interceptions, while yards per attempt and touchdown rate remained largely unchanged over the years. But why?

ColdHardFootballFacts.com refer to the the early years of NFL history as the Dead Ball Era:

The period in NFL history (1966-77) that was ruled by low scores and stifling defensive play. Many of the most famous defenses of modern NFL history – Pittsburgh's Steel Curtain, Dallas' Doomsday Defense, Minnesota's Purple People Eaters and the Rams' Fearsome Foursome – all played in the Dead Ball Era.

By 1978, the league wanted to make the game more attractive and implemented a series of rule changes designed to increase the pace of scoring. One example is the 'Mel Blount Rule': To open up the passing game, it became illegal for defenders to contact receivers five yards beyond the line of scrimmage. Also, the pass blocking rules were extended to permit extended arms and open hands and a seventh official was added specifically for pass interference calls. In 1981, the penalties for intentional grounding were reduced. The effect of these rule changes can be clearly seen in the spikes between 1978 and 1981 in almost every single one of the charts above.

After the highly physical 03/04 AFC Conference Championship game between the Colts and Patriots, Colts GM Bill Polian successfully lobbied the NFL for a stricter enforcement of illegal contact, pass interference, and defensive holding. Here's an excerpt from a New York Times article about that game

Until that January night in 2004, the Colts' offense had seemed virtually unstoppable [...]. They had scored 10 touchdowns in 17 postseason possessions [...]. Almost everyone anticipated the title game would be a chess match, full of move-for-move encounters between Colts quarterback Peyton Manning and Patriots Coach Bill Belichick.

Belichick, celebrated for his cerebral approach to football, took a cruder stance. He [...] instructed his players to hit the Colts' receivers hard every chance they had. The strategy was called rerouting, and what it meant was that instead of Colts receivers going unimpeded to where Manning expected them to be, the Patriots rerouted them - shoving is a more precise term - until the timing of the pass patterns was so off that the plays were useless. [...]

When it was over, when Marvin Harrison had been jostled out of the game plan, when the Patriots had intercepted Manning four times, the rest of the N.F.L. had its blueprint for stopping the Colts [...] and the National Football League had a rules issue on its hands.

More recent rule changes have put more emphasis on protecting the quarterback (most recently the strict enforcement of the ‘Brady rule’) and the cumulative effect of all these rule changes have led to a significant inflation in offensive stats, particularly in the passing game.

Below is a list of the top 20 quarterbacks by career passer rating.

If you look closely, you'll notice that 15 of the top 20 career passer rating leaders were still active in 2009 (in bold). Notable names on the top 20 list who were not active this decade: Steve Young, Joe Montana, Otto Graham, and Dan Marino. All of them are Hall of Famers. Does this mean that all of the current crop of high-stat QBs are going to make it to the Hall Of Fame? Not a chance.

Or let me ask the question differently: Are Chad Pennington (No. 12), Carson Palmer (No. 13) or Daunte Culpeper (No. 14) better quarterbacks than Roger Staubach or Troy Aikman who rank 28th and 42nd on the full list respectively? Nope, didn't think so.

The inflation in the passing stats renders any stat-based comparison of QBs largely mute - unless you correct for the stat inflation. To illustrate the point, I've taken the passer ratings from Roger Staubach's, Tom Brady's and Peyton Manning's best seasons and indexed them against the league average in that year. This is what such a comparison would look like:

The argument about the depth of QB talent currently in the league is often based on the stats the young quarterbacks have accumulated in recent years. As I've shown, these stats have been artificially inflated, so unless you find a common baseline to compare the stats, they are simply not comparable with previous QB classes. I would argue that today's crop of QBs is just as talented as any other class of QBs, the difference being that external factors impact their production and efficiency in such a way as to make them look better than ever before.

I name-dropped Don "Air" Coryell at the top of the post for a reason: The "Air" Coryell coaching tree has produced an impressive collection of rings. Hall of Fame coach John Madden began his career as a Coryell assistant and has one Super Bowl ring. Joe Gibbs also started out under Coryell and brought three Lombardi trophies to the Redskins.

The offensive philosophy of Ernie Zampese, another Coryell assistant, was behind the offense that played a major role in the Dallas Cowboys winning three Super Bowls in the 1990s. Zampese had trained Norv Turner with the LA Rams before Turner moved on to become OC for two of those Cowboys titles. Zampese succeeded him in Dallas and helped win the third. Another Coryell disciple, Mike Martz, ran the Rams' 'Greatest Show on Turf' and was also the only person in the history of the universe to coach Roy Williams to more than 1,000 NFL receiving yards.

Fittingly therefore, Mike Martz gets the final say on the "Air" Coryell offense:

Don is the father of the modern passing game. People talk about the West Coast offense, but Don started the 'West Coast' decades ago and kept updating it. You look around the NFL now, and so many teams are running a version of the Coryell offense. Coaches have added their own touches, but it's still Coryell's offense. He has disciples all over the league. He changed the game.

Another scheme that helped push the passing stats is Bill Walsh's West Coast Offense: by placing a high emphasis on a short, horizontal passing attack, QBs achieved a higher completion rate and stretched defenses, thus opening up the field for longer passes that in turn achieved greater gains.

BTB-member East Bay Ray points out that the fact that more colleges are running pro style offenses may be a factor as well:

[More] QBs are schooled in proper passing fundamentals, and are learning more complex offenses, at a younger age. The transformation in college football from smashmouth running games to aerial offensive shows has been even greater than the NFL’s transformation.

Not you father's NFL anymore

The facts are clear. All the stats indicate that QBs in the league today are living in a passer's paradise. We are witnessing what CHHF two years ago called the 'Golden Age of the passing game'.

I've looked at three potential reasons for the surge in passing stats. Which of these do you favor and are there other important factors that should be considered in this discussion?