Most Cowboys fans know that Tony Romo regularly has one of the highest passer ratings in the league.

There are Cowboys fans out there who know that Tony Romo holds the third best career passer rating of all time in the NFL. Here are the top five in career passer rating: Steve Young: 96.8, Philip Rivers: 95.8, Tony Romo: 95.6, Peyton Manning: 95.2, Kurt Warner: 93.7. Mighty fine company.

I would bet that the majority of BTB-members know how the passer rating is calculated (or at least know where to look it up), and we’ve all sort of developed a feeling that a number approaching 100 is pretty good, 80ish is about average and anything close to or below 60 is approaching JaMarcus Russell territory.

The intention of the passer rating was to give equal weight to all four components and to have a sliding scale that would differentiate between outstanding, poor and average performance. A league average passer performance would result in a score of 1.0 for each component. An outstanding (or record-breaking) performance would score 2.0 points, a really poor showing would net 0 points.

For the completion rate, this looked as follows: based on league averages in the early 1970s, the ‘average passer performance’ was set at a completion rate of 50%. These 50% would therefore equal 1.0 points in the formula. The highest completion rates up to that point were around 70%, so any passer completing 70% of his passes would get 2.0 points. A 30% completion rate would result in 0 points.

So how do you turn 70%, 50% and 30% into 2, 1 and 0 points respectively? You subtract 30 and then divide by 20. That is how the completion rate is calculated in the passer rating. A similar conversion formula was used for the other three components to make them fit the 2, 1 and 0 point logic. Below are the values that denote outstanding, average or poor performance in the passer rating, as implemented based on league averages in the early 1970s.

Evolution of the passer rating

Using the league averages of the early 1970s, the passer rating formula was constructed in such a way that each of the four components were balanced and each contributed about 25% to the total passer rating. 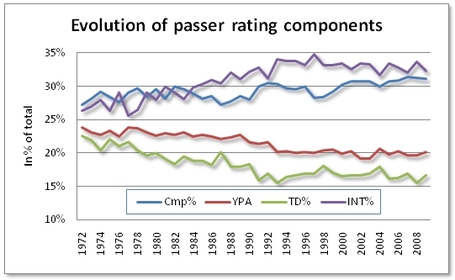 In 2009, completion percentage (31%) and interception rate (32%) accounted for almost two thirds of the passer rating, while yards per attempt (20%) and touchdown rate (17%) have lost significant weight in the formula. The passer rating today rewards the low risk, high completion game typical of a West Coast style offense and also reflects the increased involvement of running backs and tight ends in the passing game.

The initial goal of the passer rating was to establish a standard by which you can compare quarterbacks, regardless of when they played. And that goal has been achieved. All quarterbacks in the history of the NFL are measured by the same criteria, even though those criteria are based on 1970 standards.

It is actually fairly easy to adjust the passer rating formula to where each component is again weighted at about 25% to better reflect the average performances in the modern passing game. But that would defeat the purpose of having a comparable number across the decades.

Now that we’ve established the passer rating, warts and all, our next session "Peerless Passers" will be about the Cowboys’ quarterbacks and how they compare statistically. Thank you for your attention, class, and I hope this session proved to be enlightening.

Now if I could only find my glasses, the short bus has already pulled up outside …

Hat tip to kentuckybronco from SB Nation's MileHighReport.com for the poll questions template.