Cowboys Stadium: Could You (Safe) Stand It?

Share All sharing options for: Cowboys Stadium: Could You (Safe) Stand It?

Reading Lars' excellent piece on the Cowboys Stadium, and its licence to print money re-ignited an idea I've had since the stadium's debut on that muggy September night when fans packed the "party pass" zones and the Giants stole the game.  Back then, complaints filtered out that the zones were too crowded, that only people nearest the rails could directly view the field, that a trip to the bathroom risked losing your place.

It suggested something was missing.  The idea of a party zone was correct, but something went wanting in the execution.  Jerry Jones claims to have visited some of the great architectural buildings to seek inspiration for his mothership.  Seeing the results, I think Jerry missed this place:

This is the Suedtribuene, the famous south stand at Borussia Dortmund's Westfalenstadion. That small piece of football real estate holds 24,000 screaming, flag-waving fans. Several pundits have called the Westfalenstadion the ideal place to hold a cup final and this giant terrace is the reason why. 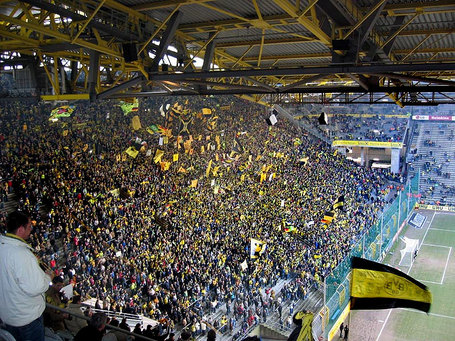 It's so dense, and so loud, because it's the largest "safe-standing" area in the world.  Terraces like this used to exist all throughout the world, but many European countries banned or sharply reduced their number after a number of crushes and stampedes in the '80s killed dozens.  The Germans seem to have the culture and know-how to keep them as integral parts of their stadiums.

Putting one or two of these in the open, standing areas of the new stadium would make it untouchable. I know this is nothing but wishful thinking on my part.  Jerry Jones just spent over a billion dollars on Cowboys Stadium and is more interested in recouping his investment.  For all I know the NFL doesn't allow spectating like this, or the engineering may be too extreme.   But Jerry also likes to have the best, and a smaller version of this standing-room terrace like this looks, to me, like the next eventual stadium evolution, whenever it may come.

This screams football.  It's the other kind of football, but how different are the atmospheres?  How many of you stood at your high school's football games?  How many of you stood, or still stand, throughout your college games?   A party zone like this would take Dallas back to football's roots.  It would make places like Cleveland's Dog Pound look mangy and flea-bitten by comparison.

It would mix the poshness of the current stadium with the grit of Friday Night football.  It would become one of the hottest tickets in the Metroplex, or anywhere.  It would be LOUD!  Imagine every one of those yellow-clad shirts in blue.  Imagine all those giant flags with stars on them.

That's a party zone I would stand for -- and stand in line for.