Those of you who follow BTB regularly know that we are huge fans of the type of advanced statistical NFL analysis done by Football Outsiders. We have used Football Outsiders (FO) statistics quite frequently here on BTB in the past to quantify and solidify our arguments and we will continue to use their unique statistical analysis and insight in the upcoming season.

FO publish some of the most interesting and incisive work you can find anywhere on football, and if you look closely, you’ll find that many BTB members are also members of footballoutsiders.com. If you've never heard of them, here's a good introduction. 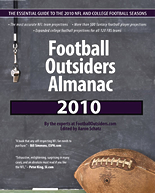 FO's managing editor, Bill Barnwell, was kind enough to take some time and answer Dallas Cowboys questions from his FO perspective. A huge thanks to Bill.

"Bill Barnwell graduated from Northeastern University in 2006 and served as the Sports Editor for IGN.com before becoming FO's Managing Editor. Bill has written for The New York Times, The Wall Street Journal, and ESPN The Magazine, as well as FOXSports.com and Rotoworld.com, while his research has been cited in papers around the country and on the Freakonomics blog. He also serves as a statistical consultant to a Major League Baseball team. Bill currently writes the "Quick Reads" and "Fantasy Matchups" columns each week for ESPN.com."

For those of you who may have missed it, FO have just published the ‘Football Outsiders Almanac 2010’ and if you’re even remotely interested in football statistics and analysis, it is a must-read. The Almanac is available as a .pdf file or in book form and it can be purchased here or from Amazon here.

The Interview with Bill Barnwell after the break.

Blogging The Boys: Before we get into specific questions about this year’s Almanac, we’ve got to talk about the elephant in the room: Here in Cowboy land, we have the strong feeling that FO’s statistical model, for whatever reason, consistently underrates the Cowboys and consistently overrates teams like the Eagles and the Patriots, whose DVOA rating for example is often higher than their league W-L record. Is there a specific aspect of the Eagles or Patriots game that makes them perform better on the FO statistical model?

Bill Barnwell: Hmmm. I think we got that reputation in 2008, when we started doing a feature with Tim MacMahon at his Dallas Morning News blog. That year, the Eagles had a higher DVOA than the Cowboys for pretty much the entire season, despite the fact that the Eagles appeared to be in turmoil and the Cowboys started off the year on that great run.

I think if there's anything to that idea, it's that the Patriots and Eagles are two of the most pass-happy teams in the league, and DVOA rewards the sort of consistent gains and repeated first downs that such a system entails. Those are two of the most successful teams of the past ten years, so I don't know if I'd say that DVOA is overrating them, but I expect that some might disagree.

Last year, the Cowboys had the fifth-best DVOA in the league; the Eagles were fourth. If we included the playoffs, the Cowboys would be ahead of the Eagles. The Patriots were third, but they played a much harder schedule than either the Cowboys or the Eagles. If we don't include strength of schedule, Dallas ranks ahead of New England. I don't think any of that is unreasonable. The Cowboys were a very good football team last year by any measure, including DVOA.

BTB: The 2010 Almanac FO projected the Cowboys with 7.5 wins for the 2010 season and finishing last in the NFC East behind the first place Eagles, second place Redskins and third place Giants. Can you briefly explain how you arrived at that projection, and what are the Cowboys’ best- and worst-case scenarios for 2010?

BB: Well, I think there's a fair amount of things our projection system would be concerned with when it comes to Dallas. First is that thing we always talk about with the Cowboys -- health. Dallas had the league's second-fewest AGL (Adjusted Games Lost, our injury metric) a year ago. Although I think the world of Jim Maurer and the work that his crew does, that's not going to happen again; their ranks in defensive AGL over the previous four years were 12th, 8th, 22th, and 19th. Obviously, an injury to DeMarcus Ware or Jay Ratliff would be catastrophic. The expected increase in injuries should drive a decline in a defense that was only 12th in the league in DVOA a year ago. There's also not the depth available that the team had a few years ago, as the poor drafts at the end of the Parcells Era have come home to roost.

There are also holes that our projection system doesn't really like, especially the one at left tackle. You could argue that Doug Free will be a very good left tackle at this level, but the truth is that we don't know yet. (I can tell you Alex Barron isn't.) The offensive line is creaky and, after years of staying healthy, has begun to collapse. There's very little experience at safety. The schedule's tough.

I think the best-case scenario is that Dallas stays healthy, wins a bunch of divisional games, and goes 11-5 and takes the NFC East. If that happened, I certainly wouldn't be shocked; it's what happened last year. In the worst-case, Romo or Ware go down with a big injury, Doug Free is Pettiti 2.0, the secondary is a sieve, and they go 6-10 and Jerry Jones drops the scoreboard on Wade Phillips.

BTB: I’d argue that the Cowboys depth on the offensive skill positions, WR, RB and TE and even backup QB is some of the best in the NFL, and our secondary and LB depth is not far behind either. You’ve argued that the Cowboys are short in depth. What do you base that on?

BB: I don't think I can agree with you there. Certainly, I think the world of Tashard Choice, and Martellus Bennett is a very good second tight end. If you include Dez Bryant as wide receiver depth, I think he's a talented player, but rookie wideouts aren't exactly sure things by any stretch of the imagination, even guys who end up as really good players in this league.

Jon Kitna hasn't played since 2008 and he wasn't all that good when he was in the lineup. Again, I think highly of Orlando Scandrick, but he's going to be playing most snaps anyway, he can't play on the outside, and there's nothing behind him. The starters at safety are weak, let alone the reserves, and we don't know anything about Sean Lee. I think we'll have to agree to disagree.

BTB: Earlier this year you examined the injury rates of all NFL teams based on the FO Adjusted Games Lost stat and concluded: "Among the six healthiest teams were organizations that have made a habit of showing up at the bottom of these lists: Tennessee, Kansas City, and Dallas. […] While we've established that injury totals for a team tend to regress to the mean, it's becoming apparent that those organizations might be quantifiably better at keeping their players healthy than the average team". Is this something you factored into your win projections, or did you assume a regression to the mean for the Cowboys in terms of injury?

BB: We do factor this into the win projections. I expect the Cowboys to regress towards the mean in injuries, but I don't expect them to regress in the way that a total flukily-healthy team like the Broncos might.

BTB: Dallas is not the only team that you project to finish far below where the majority of observers would rank them. The Saints, Vikings and Chargers all project badly. What type of reactions have your projections elicited so far, and what were the initial reactions at FO headquarters when you saw the projected results for the first time?

I don't know if I'd say they project badly; they all have win projections between eight and nine wins, which I think isn't stunning. If we know anything about the majority of observers heading into a season, it's that they fail to account for how much change there is likely to be in a team's record from year-to-year. (2009 was a notable exception in this regard.)

Virtually no teams win 11-12 games year after year; whether it be due to injury, a tougher schedule, a change in performance, bad luck ... a fair amount of them drop back to the pack. When our model projects this, I don't think it surprises any of us as writers; it's just taking a longer-term view of the league and its yearly dynamics than most others.

BTB: Heading into last season, Miles Austin was the #1 prospect on FO’s 25 Top NFL Prospects list which you personally compile annually. At that point, Austin had not started a single NFL game, yet you put him in the #1 spot. Hats off for that. Now of course we’re all curious: Did any other Cowboys make the list this year?

BB: See! We don't hate the Cowboys! The Cowboys were represented again on this year's list; Tashard Choice was fourth and Orlando Scandrick was sixth.

BTB: FO also does a lot of research into how college players will perform in the NFL. What do your projections say about Dez Bryant?

BB: We use a statistic called Playmaker Score to measure how wideouts will do at the pro level; it's not an exact science by any means, but it's a good way of separating guys into buckets of "Likely to succeed" and "Likely to fail". Dez Bryant had the best Playmaker Score of any wideout taken in the first two rounds of this year's draft. That's good news for his pro prospects. Again, I don't know if I'd expect him to contribute at a high level this year, but he should be an effective receiver going forward.

BTB: The Cowboys offense ranked in the top 5 in terms of DVOA last season in both pass offense (4th) and run offense (3rd), but ranked only 15th on pass defense. What were the issues from a DVOA perspective?

BB: I actually wrote a lot about this in the Maple Street Press Cowboys Annual that Dave Halprin curated. I think the biggest issue was the regression of the pass rush, driven by the decline in DeMarcus Ware's numbers. Of course, relying on a guy to get 20 sacks a year is crazy. Although the ends in Wade Phillips's system aren't expected to get lots of pass pressure, they should be able to do better than four sacks.

On the whole, the Cowboys had the league's best sack rate (sacks / dropbacks) in 2008, but fell off to 12th in 2009, something that will need to improve for the pass defense to halt what's been a three-year slide in overall performance.

BTB: If you were Jerry Jones for a day, what’s the one decision you would make before the season starts to improve this football team?