To Catch a Copycat, Part III: The Cat Bites!

Share All sharing options for: To Catch a Copycat, Part III: The Cat Bites!

This is the last in a three-part series examining one key play, how it was used effectively by the Broncos in an early-season game against Dallas, and how it was copied, disguised and modified by the Eagles in their matchups with the Cowboys.

In part two, I recounted how the Eagles used the weakside trap against Demarcus Ware, but also how they complemented it with bootlegs and counters using backup quarterback Michael Vick.  When we left the narrative, the Cowboys had brought the trap under control -- or so they believed.

The Eagles showed no run wrinkles in the season finale, a 24-0 Cowboys rout.  In fact, Andy Reid and his OC Marty Morhinweg called only eight runs for backs LeSean McCoy, Leonard Weaver and Brian Westbrook.  Vick did not attempt a run or a pass.

Nonetheless, the Cowboys were prepared when they saw Vick and the overload trap in the following week's playoff game.  As we shall see, they were too well prepared.

Early in the 2nd quarter, after Dallas had taken a 7-0 lead, the Eagles sent the stuttering Donovan McNabb back on the field, with Weaver as his lone running back, two tight ends and receivers Jeremy Maclin and DeSean Jackson.  They opened in a tight formation, putting the two tight ends Brent Celek and Alex Smith in a bunch formation left with Maclin.  Both tight ends were on the same side, but because they were standing up and had Maclin stacked with them, the Cowboys defenders stayed in a base formation, anticipating a pass.

From the shotgun, McNabb handed off to Weaver, who ran a dive right behind away from the bunch and gained five yards.

On the next play, the Eagles kept the same one-back, two TE, two WR package, but replaced the FB Weaver with the speedier McCoy and sent Vick in to replace McNabb at quarterback.  The Eagles deployed in an overload right, with both TEs on the right side of the line.  This is the set from which the Broncos and Eagles had run counters for Knowshon Moreno and for McCoy.  The one minor change saw McCoy set to Vick's left, rather than to his right, behind the overload:

Note how Dallas sets up when it sees the overload.  All eleven defenders are within five yards of the line of scrimmage.  Pay attention to safeties Ken Hamlin and Gerald Sensabaugh.  Free safeties normally set around 12 yards deep, but here both Cowboys safeties are set no deeper than their cornerbacks.  They can't offer deep support if Vick drops back to pass, but Dallas has no expectation that he will.

At the snap, it appears the Cowboys read the play correctly.  Vick fakes a draw to McCoy, who runs towards the overload.  Vick then waits for his right guard Max Jean-Gilles and the H-Back Smith to pull left and attack Demarcus Ware on the left edge:

You see Jean-Gilles here trying to cut Ware with Smith approaching the hole between Ware and the double-teamed DE Igor Olshansky.  Notice how the Cowboys have sold out to contain Vick's counter run:  Hamlin has charged to the edge and is waiting if Vick tries breaking the play wide; Keith Brooking is charging into the hole to challenge Smith and take that running lane away.

Farther to Vick's right, Bradie James is guarding the gap to center Nick Cole's (59) right while Sensabaugh is ready to jump to the right edge if Vick tries freelancing and following McCoy to Anthony Spencer's side.  The Cowboys appear to have all escape routes cut off, provided the play is a run.

The Eagles have sold the trap convincingly, but Vick is about to drop back and look for one of his receivers.  The Eagles are running just a two-man route, with Jackson cutting right-to-left on a shallow cross away from Terence Newman and Maclin running a post-corner against Mike Jenkins.  Because the Eagles have run exclusively from this set and because they've sold the trap here, no Cowboy is rushing.  Ware is trying to hold the assumed point of attack and the other linemen are fighting to cut off Vick's running lanes.

When he drops back, Vick has plenty of time to scan the field.  And when Jenkins stumbles trying to match Maclin's cut, the QB has an easy throw to a wide-open target: 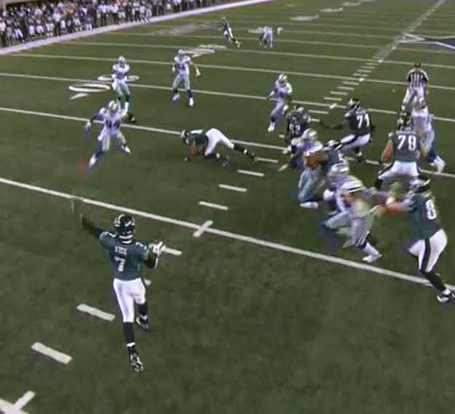 Vick has the time and space to float a soft-toss to Maclin, who waits on the pass before racing untouched up the left sideline for a score.

The Eagles took the counter trap to the next step in its evolution.  It worked as a changeup run in Denver.  It worked initally in Philadelphia, but the Cowboys learned to recognize it and stuff it.  Then, the Eagles coaches went against tendency, passing when they had run before and reaped the reward.

This is how NFL coordinators spend good chunks of their summers, looking for obvious tendencies in their own games and how they can tweak them for their team's benefit, especially against familiar divisional foes.

Matchups like this are also why many NFL fans are not too upset that their summers are slowly winding to a close.

We're only 15 days from the start of training camp, ladies and gents!