Share All sharing options for: Cowboys Kicker David Buehler - Dealing With the Pressure 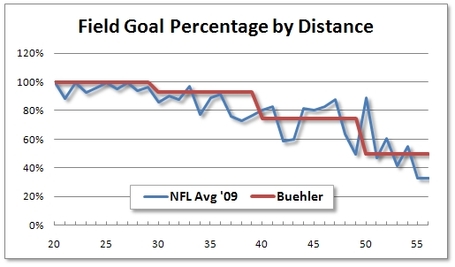 Going through the records of Rafael Vela, Todd Archer and Tim McMahon, I have identified the distances for 44 of those 48 field goal attempts, and plotted them in the graph above. The blue line is the average field goal success percentage for all 930 field goal attempts in the NFL last year. I've bundled Buehler's attempts together in 10 yard increments, as the 44 attempts are not enough to generate a smooth line.

The average FG percentage in the NFL last year was 81.3%. David Buehler is ahead of that average. According to ESPNDallas, Coach Joe DeCamillis is happy with what he's seen so far:

"I’m pleased," DeCamillis said. "I know he’s got work to do. He missed the long one. You’d like to make that, but that’s a tough field goal. I was pleased with the way his technique looked. I liked the way he handled things. I was impressed with how smooth he was. He was in good shape.

Yet the discussion about Buehler continues unabated. And as Jean-Jacques Taylor from the DMN observed, a key reason for that is

[...] because there's absolutely no way to manufacture the pressure Buehler will face in the fourth quarter on the road in a nationally televised game that counts until he does it.

There is little reason to believe that with the help of Chris Boniol, Buehler won't be able to acquire the necessary physical skills to become the Cowboys placekicker - a 87.5% success rate is nothing to scoff at, and with 49 of his kickoffs last season traveling for more than 70 yards, his power is also unquestioned.

But does he have the mental fortitude to get it done in the NFL?

Why Buehler needs to be one cool customer

Below are three separate quotes that I picked up recently:

Chris Beesley from the mothership quotes Buehler after the Bengals game:

"I was just a little too quick getting there, and I'm a little upset with myself," Buehler said. "I have to make those. I have to make any one that they put me out to kick. I expect to make them all."

I noticed some about Buehler today, after the first miss, special teams coach Joe DeCamillis rehuddled the kicking team to settle him down. [via Twitter]

Gerry Fraley at the DMN:

"I demand perfection," Buehler said. "If I miss one ball, I'm upset with myself."

The common theme here? I guy who admirably puts himself under a lot of pressure but seems perhaps a little over-eager and may still let the stress of a field goal get to him.

Geir Jordet, associate professor in sports psychology at the Norwegian School of Sports Sciences, looked at penalty shootouts in soccer to determine how players respond to extreme pressure. Jordet and his colleagues looked at 41 penalty shootouts with a total of 409 penalty kicks from the World Cup, European Championships and Copa America between 1976 and 2004. These are JJT's 'fourth quarter on the road in a nationally televised game' equivalents in soccer.

For those unfamiliar with soccer, a penalty shootout is fairly straightforward. Each team picks five players, who take turns to take shots from the penalty spot. The team that scores the most goals wins. If the score is tied after five shots each, the shootout continues in a sudden death format until one team wins.

The researches evaluated the effects of the players' position, age, fatigue and other criteria on their chances of success. These things made a difference, but the biggest single factor to affect the outcome was the order of the penalty shot, Jordet et al report in the Journal of Sports Sciences.

The success rates successively and significantly decline as the pressure increases, dropping from 86.6% for the relatively pressure-free first kick to 64.3% in the sudden death kicks. The penalty kick is taken from 12 yards out and the objective is to hit a barn-sized structure (or 'goal') 24 feet (7.32 m) wide by 8 feet (2.44 m) tall. In principle, every halfway decent player should be able to hit this. Not so.

More recently, Jordet's team has discovered that the results are even more dramatic for the highest-pressure situations:

In one study, described in last month's New York Times, researcher Gier [sic] Jordet looked at a dataset of important international matches and found that when a team needed an immediate goal to win a shootout (and the game), it succeeded 90 percent of the time. But when a team needed a goal simply to tie the shootout, and a miss would mean an immediate loss, it succeeded only 60 percent of the time. (The overall average on penalties was 79 percent, as Jordet and colleagues reported in this paper.)

A penalty shot, similar to a field goal in many ways, is more a psychological event than a skill/physical event. The higher the pressure, the more likely players are to miss. But Jordet and his colleagues also offer up some stat-based advice on how to overcome these psychological pressure situations.

In his most recent research, Jordet looked at the importance of a solid routine to calm the nerves. In their tape review of penalty shootouts, the researchers found that players who pause for less than half a second after the referee's whistle to begin their run-up to the ball are only successful 63% of the time. Those players who take slightly longer to gather themselves have a 81% success rate.

So what's the takeout here? As you line up for the kick, take a deep breath, compose yourself and don't let the pressure get to you.

And perhaps most importantly for David Buehler, emulate the cold, hard and ruthless precision of the German soccer team during penalty shootouts - shouldn't be too hard, Bühler is a German name after all.