The sun was shining on a beautiful afternoon in Oxnard, but unfortunately the Dallas Cowboys practiced without pads for a second time. There was some good news though, as mentioned in a tweet earlier, Dez Bryant was out on the field - no, he wasn't practicing - but he was moving  around pretty well as he played catch with Tony Romo and Miles Austin before practice began. He's not all the way back, but he was moving without any noticeable limp.

Early on, the Cowboys went to special teams with plenty of emphasis on technique like block-and-release for punts, backpedal-blocking for punt protection, and getting around the edge for punt blocks and coverage. Mat McBriar spent a lot of time kicking, first before official team drills to AOA, Jamar Wall and Bryan McCann. Later, Terence Newman and Patrick Crayton took over the punt return duties. Also during pre-practice warm-ups, Kyle Kosier was snapping the ball along with Andre Gurode and the other backup centers. Not sure you can read anything into that but I thought I'd pass it along.

Montrae Holland was getting reps with the second-team at guard, and Sam Young was the right tackle while Robert Brewster was the left tackle on the second unit. With no Marty B practicing, DajLeon Farr was manning the second TE spot, as only he and Jason Witten represented the TE position. When they broke up into position drills, they had Farr wearing resistance band handcuffs to teach him proper technique of keeping his hands in tight while blocking Witten.

After going through some standard positional drills, like the o-line working on double-teams and combo blocks where they break off the double-team and pick up a second defender, the skill players gathered for a round of 7-on-7. Romo started it off with a pass to Witten but T-New was able to break it up by hitting Witten and the ball right as he was trying to bring in the catch. Roy Williams had an OK day, beating Mike Jenkins on an out pattern and later caught a nice pass up the sidelines. On another pass from Romo, the ball just went off his fingertips but in truth, Romo led him a little too far. Romo also hooked up with his favorite, Witten, as the TE taught rookie Sean Lee a lesson in pass coverage. Jon Kitna settled for a few short passes to RB Herb Donaldson, hit Sam Hurd on a sideline route and overthrew Terrell Hudgins. Stephen McGee hit a couple of short patterns over the middle.

Romo's second time around wasn't as profitable, Orlando Scandrick tipped a pass away then he overthrew Roy on the sideline. Of course, you can count on him connecting with Witten who had beaten Keith Brooking, then after a few throws to Miles Austin, Romo was picked by Cletis Gordon. Kitna had a pass broken up by Jenkins, along with two incompletions, his only reception on the second go-around was a short one to Kevin Ogletree. McGee finsihed up with one catch and one incomplete pass.

The team then moved on to 11-on-11. Again, Romo hooked up with Roy, twice on his first time around, along with a catch by Austin and one by Crayton. They also mixed in a couple of runs. Kitna found Witten for a completion, and continuing the TE theme hooked up with Farr, along with a couple of runs. McGee hit FB Chris Gronkowski on a short pass and then threw an incompletion.

The second time around, the defense got more aggressive. They blitzed more often and they were moving guys around in an effort to confuse the offense. This met with some success. Romo handled it pretty well by using his safety blanket Witten a couple of times, along with a few draws, although the second one was easily snuffed out by the defense. Roy also caught a pass between Scandrick and Newman, but on another one he wasn't able to pull the pass in. Kitna tried to screen with Tashard Choice but the defense was blitzing and blew it up. That was followed by what would have been an easy sack from the defense on another blitz. Kitna tried to hit Crayton but Newman broke that up. The aggressive defense was winning the day on the second go-around in 11-on-11. McGee did manage to beat the defense with a nicely formed screen to Jesse Holley and then finished the day with a short flare pass to Ogletree.

Overall, Romo showed poise and the ability to read the defense, as would be expected. But the second- and third-unit offenses struggled in the face of an attacking defense. The team finished up with a short conditioning run and then called it a day. 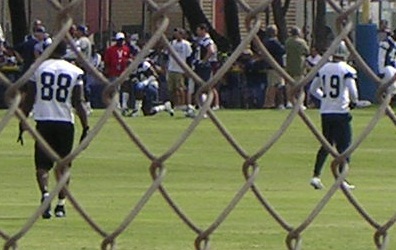 Dez on the field before practice playing some catch with Miles Austin. Sorry for the fence, couldn't get a better angle. 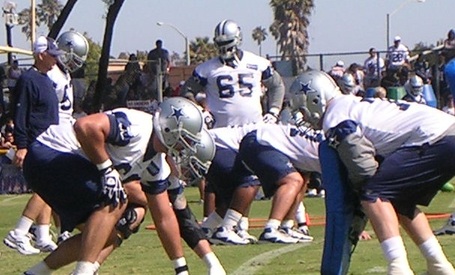 The o-line gets some work in.