The Road to the NFL Playoffs: Strength Of Schedule

Share All sharing options for: The Road to the NFL Playoffs: Strength Of Schedule

When the schedule for 2010 was originally published, the naysayers, scaremongers, doom merchants and other nattering nabobs of negativity came out in full force: The Dallas Cowboys have the third toughest schedule in the NFL. Woe be upon us!

I'm in a nice and mellow myth-debunking mood today, so let me make this post very, very simple: Strength of schedule don't mean Jack. There is no correlation whatsoever between a team's strength of schedule going into the season and the number of wins that team has at the end of the season. No, wait, let me correct that. The correlation (r²) is exactly 0.0006 over the last eight seasons.

At the start of last season, the Cowboys had the 11th toughest SOS with .516. By the end of the season the actual SOS had mellowed to .488, and Dallas ranked a comfortable 23rd.

In 2008, the Steelers started the season with the toughest SOS in the league, with opponents having combined for a .598 winning percentage in the year before. The Steelers went 12-4 in 2008, and their SOS at the end of the year turned out to be a much more manageable .520. Their initially projected 12 games against teams that were .500 or better in 2007 turned out to be eight in 2008. The Steelers rode what initially was considered one of the toughest schedules in three decades straight to a Super Bowl win.

Cue the 2009 Saints: They entered the 2009 season with the 8th toughest schedule in the league (.555) and the daunting task of playing against seven teams who'd finished with 11 or more wins in 2008. By the time the dust settled on the 2009 season, the Saints had faced what turned out to be the softest schedule in the league (.426), had faced only two teams with 11 or more wins, had made off with the Super Bowl and last I heard they were still off celebrating somewhere.

SOS does not take into account the yearly roster changes due to free agency and the draft. Nor does it account for injuries. Or changes in coaching staff, or redesigned schemes, or player retirements, or plain luck and so forth.

I've gone back and looked at the schedules for all teams from 2002 through 2009, the period during which the league has played in the current divisional alignment. I looked at the SOS at the beginning of the season ("starting SOS") and how the SOS looked after the season ("actual SOS") and how each correlated with playoff appearances and W/L records. In total, that's two sets of SOS for 256 teams.

I sorted all the SOS percentages into five equally large classes, e.g. there were 51 teams with a starting SOS below .470, 53 teams with a starting schedule of between .479 and .489 and so on. I then looked at how many teams in each class enjoyed which degree of post-season success. The results are summarized in the table below:

What becomes clear pretty quickly as you look at this table is that the starting SOS does not appear to have any impact on post-season participation or -success. The percentages of how many teams make it beyond each post-season hurdle are virtually identical, regardless of how soft or tough the starting SOS was. 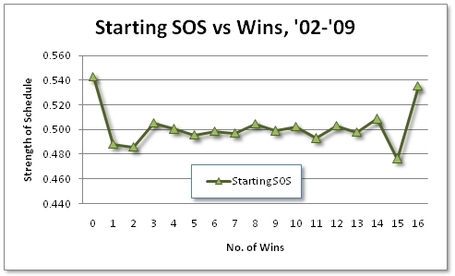 For the graph on the left, I looked at whether the starting SOS would change depending on the amount of wins teams were able to generate per season between 2002 and 2009. You'll notice that (barring the the outliers of 0 and 16 win teams which we'll get to later) the average SOS is basically the same regardless of how many games a team is able to win per season.

Wrap your mind around that for a second: As a predictor of how successful a team will be, the SOS is effectively worthless. 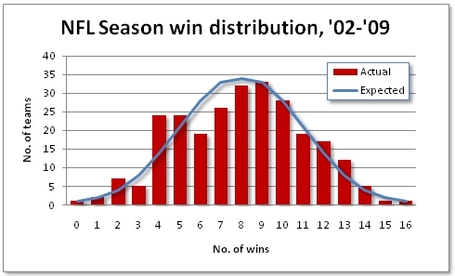 The two outliers with zero and 16 wins each in the graph above are the 2008 Lions and the 2007 Patriots, and because they are the only teams in their win class, the starting SOS naturally fluctuates more than for other win classes where I've aggregated more teams.

The graph on the right shows the distribution of the number of wins over the last eight years. The red bars show the actual number of teams that ended the season in each win class. The blue line shows what would have been statistically expected if all the wins followed a normal distribution pattern.

The win distribution in the NFL is pretty close to a normal distribution curve, with a slight blip at four and five wins which is compensated for with a dip at six and seven wins.

As you look at the win distribution on the right and contemplate the flat green starting SOS line above, you may wonder whether if you just average enough teams, the average will invariably approach .500. This is of course completely. At the same time, it is also completely false. Here's why:

Life's what you make it 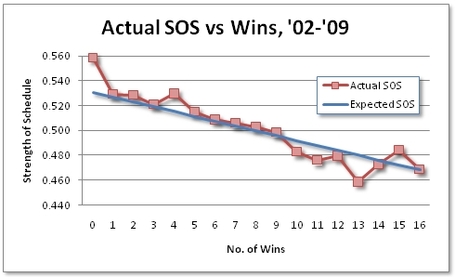 In the graph on the left I've plotted the actual SOS per season against the actual wins per season from 2002-2009. The blue line is the 'expected SOS' based on the Lions/Patriots example above, i.e. what you would expect the SOS to look like based only on your own win percentage.

The red line is the what the actual SOS looks like for each win class over the last eight years.

The correlation here is .886, which means that there is a very high interdependence between the number of wins in a season and how 'easy' the actual SOS turns out to be at the end of the season.

Of course, as we saw earlier, your actual SOS is an almost direct result of the number of wins you get in a season. Which brings us back to square one: the more games you win in the regular season, the more likely you are to make the post-season.

Overall, it's simply how the cookie crumbles in the NFL. You can't have Miskatonic University on your schedule, nor can you play against the Academy of Visually Impaired Nuns. You play the hand you're dealt. Win more games than you lose, and more often than not you end up making the playoffs.