Tackling Injuries In The NFL

Share All sharing options for: Tackling Injuries In The NFL

[Ed Note] Unfortunately, with the injury to John Phillips, this article touches on a subject we are already dealing with this season.

Football is a violent sport. For the last four years, about three hundred players per year suffered season-ending injuries that put them on the Injured Reserve (IR) list. These players suffer injuries that you can't tape up and there's no way to 'play through the pain'. For the most part, these are serious, career threatening injuries.

A recent study published in the Foot & Ankle Specialist found that more than a third of the NFL players who suffered an Achilles tendon injury were unable to return to the NFL. Those who did resume professional play saw their power ratings drop by an average of 50%.

I have gone through the IR data for the last four years, and without getting too graphic, some of the injuries read like the emergency room admittance list after a mass casualty incident.

When the rosters are cut down to 53 players on September 4th, there will be 1,696 players on the 53-men rosters of the NFL teams. 315 players were placed on the IR list in the 2009 season. That's the equivalent of almost 20% of the players on the NFL rosters suffering season-ending and often career ending injuries.

After the break we look at which positions are most injury prone, what the most common injuries are and what the NFL is doing about it.

The NFL publishes a monthly list of transactions that includes all players placed on IR. For the most part, the IR list contains only serious injuries, as any player placed on IR must stay there the entire season.

If you have a player who will miss a few games but can help your team later in the season, you'll have to carry him on your active roster until he's healthy again. The advantage of the IR for NFL teams is that they can keep an injured player on the team but don't have to give up a roster spot for him.

However, not all players placed on IR are injured to the same degree. Teams can and do use the IR as a roster management tool as well. The IR is a good place to 'hide' a promising but not yet NFL ready player for a year without giving up a roster spot.

Another thing to consider is that towards the end of the season, the 'cost' of placing a player on IR decreases. Take a starter who gets injured in week three and needs six weeks to recover from the injury. The team will probably keep that player on the roster despite his inability to play. The same injury to the same player in week 12 will see that player placed on IR to make room for some extra depth at the position.

In a study from 2005, the Pittsburgh Tribune-Review found that

The 2003 NFL injury rate was nearly eight times higher than that of any other commercial sports league, according to the U.S. Department of Labor -- and that includes the National Hockey League, the National Basketball Association and professional auto racing.

As you read on, keep in mind that the IR is just the tip of the injury iceberg. While it is a fair measuring stick of the most severe injuries suffered in the NFL, it is by no means an accurate reflection of the overall injury situation in the league. Here's how the IR numbers break down by season since 2006:

The number of players placed on IR over the last four seasons has been pretty constant at around 300 per season. Note that the IR numbers I use per season are not the calendar year figures but are from February to January of the next year to better reflect the actual NFL seasons.

In the next step, I divided the number of IR injuries by the average number of starters to get a better indication of which position groups are most injury prone. The graph below illustrates that: 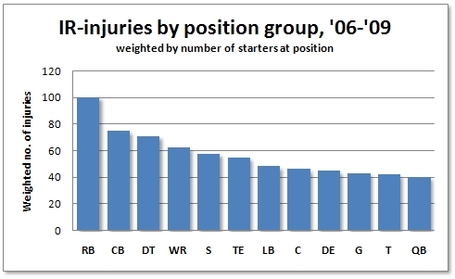 The graph shows the relative propensity of each position group to suffer an IR injury in relation to the number of starters at the position per team.

The running backs are two and a half times more likely to suffer an IR injury than QBs.

The fact that QBs are the least injured shouldn't come as a big surprise, after all, half of the offensive game plan is about protecting the QB.

The amount of contact (at high velocities) that running backs have to deal with is probably the reason for their high injury rates. Think about Marion Barber running headfirst into a tackler who's coming at him from the opposite direction. That's a lot of kinetic energy that has to go somewhere, and there is only a finite amount of kinetic energy that muscle tissue, tendons and bones can absorb and stay healthy.

Safeties and cornerbacks are also relatively high risk positions, and again, this might be partly explained by simple physics. First, the secondary often tackles at much higher velocities than the front seven. Higher velocities, higher kinetic energy ... you get the idea. Second, when the secondary has to help out against the run or against receiving tight ends, player weights begin to play a factor. Picture Alan Ball (188 lbs) or Orlando Scandrick (193 lbs) tackling the Chargers' Antonio Gates (260 lbs) or the Ravens' LeRon McClain (260 lbs). Ouch.

I would have expected wide receivers to be further up the list, but perhaps the rule changes (horse-collar tackle, anybody?) and favorable officiating that aims to reduce contact have helped reduce these numbers. 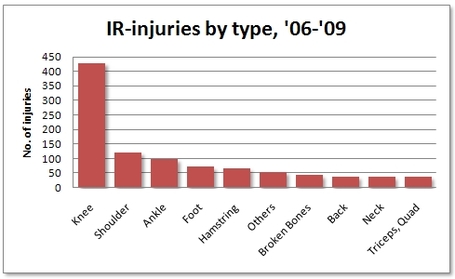 The knee injury is by far the most common type of IR injury, accounting for 34% of all IR injuries over the last four years. ACLs, MCLs, Patellas, kneecaps. You got it, the NFL can shred it.

And the next time you hear somebody say that a torn ACL is not such a big deal anymore with todays medical capabilities, think again.

New research just published last week in the American Journal of Sports Medicine suggests that only 63% of NFL players return to play following ACL reconstruction (31 of 49 players in the study). The study also found that the likelihood of returning to play in the NFL has little to do with the success of the surgery. In fact, being selected in the first four rounds was found to be the highest predictor of a successful eventual return to NFL play.

Shoulder injuries are a distant second among IR injuries, followed by your usual assortment of ailments. 'Broken bones' includes anything from broken arms to broken legs, collarbones, jaws and vertebrae. I categorized 24 different types of injuries, 'others' is the sum of injuries that did not fit any of the 24 categories.

There are 'only' 19 concussions on this list. With the recent discussions about concussions, their long-term effects and player safety, this number is bound to go up.

Tape it up and suck it up. And rub some dirt on it. This is the NFL, not the sissyFL.

No broken ribs were mentioned anywhere on the IR reports. It would appear that you are expected to play through a couple of broken ribs - and many other 'minor' injuries for that matter. Ross Tucker from SI.com wrote an interesting article recently about players playing through their injuries, and summarizes the prevalent belief quite succinctly:

Football players are conditioned since the day they first start playing to believe that playing with pain or injury is expected. To be successful as a football player one has to have significant physical and mental toughness. Playing with a physical malady of some kind is the ultimate demonstration that an athlete possesses both qualities. At least that is what the players believe.

In a different article, Ross Tucker looked at the violence inherent in the NFL and concluded that the NFL

... is the last bastion of pure, unadulterated, testosterone-laden barbarism. That, of course, is a huge part of why it is so great and we love it so much.

It's also why we are convinced that Emmitt's greatest game was the Giants game on January 2nd, 1994 in which he played with a dislocated shoulder - and not, for example, the three TD effort against the Packers in the 1995 conference championships, or any one of the many other stellar performances he had.

In closing, I'll leave you with a lesser known story about a player who would later become an important member of the Cowboys franchise: Ernie Stautner (the only German-born member or the Hall of Fame - so far) was an assistant coach with the Cowboys from 1966 to 1972 and served as Tom Landry's defensive coordinator from 1973 to 1988. This is from his playing days as a defensive tackle for the Steelers from 1950 to 1963.

"Ernie Stautner comes in the huddle, and his thumb is broken back against his wrist. There's a tear near the break, and his bone is sticking out. He has a compound fracture of the thumb. He takes his thumb in his hand and wrenches it down into his fist. Doesn't show it to anybody. Doesn't say anything.

So he stayed there for the rest of the series, and then we came off, and I'm watching him because I'm the only guy who saw that he had a compound fracture. I saw the bone. So I'm figuring now he's going to ask for the doctor, and he may have to go to the hospital because this thing could get infected, and he says, "Give me some tape."

So they throw him some tape and he just starts taping this huge ball. He makes this big fist. Then we go back in. He plays the entire game. Never misses a down. I'm just astounded, and he's using this hand that is broken as a club. He's beating people with it. After the game, we go into the locker room and he says, "Hey Doc, I think I got a problem." —Andy Russell, linebacker

Football is not a contact sport. It's a high-impact collision sport with a huge potential for injury. The owners know it, the players know it and the fans know it.

The more we learn about the human cost of this quintessentially American sport, the more questions are being raised regarding the people who run it and play it. More than 3 million kids play football at the youth level, and an additional 1.2 million suit up for their high school teams. So football's safety issues reverberate far beyond the NFL. From within the NFL, and without, a consensus is emerging that reforms are needed to keep football from becoming too dangerous for its own good. - Sean Gregory in Time Magazine.

Currently the only protective gear the NFL rules require players to wear are shoulder pads and helmets. This year the NFL is pushing to make the game safer and is recommending that players wear additional knee, thigh and hip pads during the 2010 preseason, with an option of making these mandatory by 2011.

Ironically, according to NFL.com, it appears that some players might be opposed to the move, especially those who already wear very little padding in order to maximize their speed and mobility.