I've teased this for a week or so now but today is the first installment of my film breakdown series. Each week I'll take three key plays from that week's game and break them down via film as we attempt to better understand the coaching strategies, the personnel and hopefully football in general.

Unfortunately the Cowboys haven't given me access to the coach's tape yet, so I have to rely the actual broadcast of the game itself for the breakdowns. Sometimes this limits me on how much of a play I can accurately take apart but for the most part we're able to get multiple views of the same play, which works just fine for this purpose.

This week, I've focused on the offense. The defense played fine overall and aside from a couple of containment issues and some tired legs in the fourth quarter, there really wasn't much to pick apart. There weren't many big plays made by the defense either, so singling out a play to breakdown was tough. So we'll stick with the offense this time.

I've also decided to break down three positive plays, since I thought we've had too much negativity already after the game. There were positives to take away from the loss, and that is what we'll focus on today. After the jump, three key plays from the Cowboys loss in Washington -- broken down frame by frame. For the most part.

Note: All text refer to the photo above the description. Unless otherwise annotated. Click on the pictures to enlarge.

This is the first play of the game, so how can it be a key play? While it wasn't a key play in this game this is most definitely going to be a key play for the Cowboys this season. They only ran it once but it was highly effective and is the exact sort of play (and situation) that Garrett needs to take advantage of moving forward. Here, we see the Cowboys in an overloaded "21" scheme with one running back and two tight ends on the field.

The overload is to the left (better view below) and Witten motions from off the right tackle (Bennett) to the full back spot, offset to the side of the overload. This play screams for a run to be called, whether it's a toss left, a run off tackle or a cutback with Bennett blocking the OLB out. You'll notice that the Redskins are lined up in the traditional 3-4, with the nose tackle offset to play off the LG and to the left of the C. 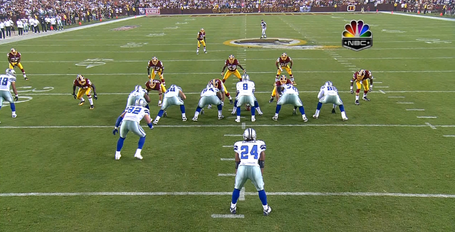 Here's a better view of the overload to the left after Witten has motioned to the offset fullback position. The Redskins have a safety (LaRon Landry, #30)) down in the box in anticipation of a run. 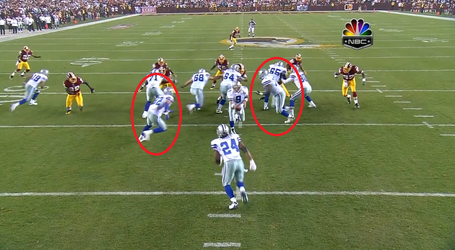 As the ball is snapped, the offensive line fires forward (a bit) while Leonard Davis pulls to his left. As Tony Romo turns to extend the ball out to Barber, Jason Witten makes his initial move to his right. This momentary movement of the offense has two blockers moving against each other towards the inside, with Davis pulling all the way out to the left side of the offense (both circled). You'll notice that Landry has turned towards the right side of the offense as he tracks Jason Witten. He's the lone player on the defense that has started to read the play. 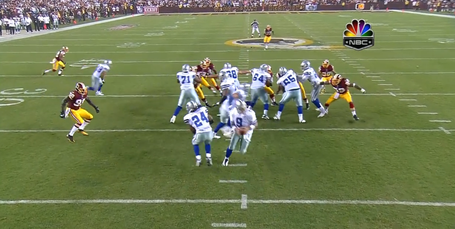 Here is where the play works to perfection. The fake handoff (executed perfectly by Romo) has drawn in the two outside linebackers. Andre Carter (#99) has fully committed to the inside and has even squared his hips a bit. This play-action fake has drawn eight defenders into the box while Miles Austin gets a free release behind them. Notice Reed Doughty playing 18 yards off the line of scrimmage. Off screen: Roy Williams runs a clear out route against DeAngelo Hall. 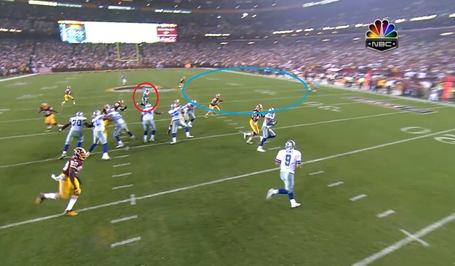 Landry has read the play from the start and clears into the right flat. Carter shadows Jason Witten, who basically screens Carter from getting to Romo. This play is designed to get Miles Austin (red circle) the ball. Doughty has also recognized the play but is too late in reacting. This beautiful play design, against the perfect defensive alignment, has opened up clear space (blue) in which to place the pass. Notice Carlos Rogers trailing Austin by about 10 yards. If it weren't for the speed of LaRon Landry, Miles Austin was close to breaking the initial tackle and streaking for a touchdown.

This play does several things perfectly for this offense: It gets Romo on the move, where he has proven to be deadly. It gets Miles Austin out in space, where he's even deadlier. It sets up this formation for a run or another play action rollout or waggle in the future. The Cowboys lined up in the overload "12" just once, but it was highly effective. This is something teams will have to be wary of in the future.

You better believe I'm going to breakdown this beauty of a play. We've been talking about the red zone woes of the Cowboys for months now and for months I've screamed for the Cowboys to use a play action fake out of either the "12" or "22" base formation. The Cowboys love to run close to the goal line and love to pass out of the shotgun as well in this situation; why not do something new?

Prior to this play the Cowboys ran an inside draw to Barber from the "21" with Anderson and Bennett cracking down inside. This play went for no gain, despite a good push up front. On 2nd and goal, the Cowboys line up in a simple "12" with Bennett initially offset to the right of Jason Witten. 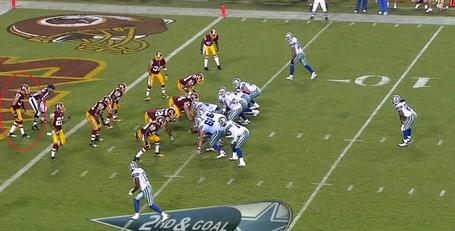 Here, Bennett goes in motion across the formation to offset to the left of Doug Free. The Redskins show that they are in a zone scheme, although they are selling out against the run. LaRon Landry is once again playing linebacker, while Reed Doughty (red circle) begins to sneak down into the box as Bennett goes in motion. This momentary step forward as Romo prepares to snap the ball places nine defenders in the box (not much room, I know). Notice Carlos Rogers (#22) as he comes across and squares up across from Bennett.

As Romo pulls off another superb fake, both Doughty and Rogers (circled) take two fateful steps forward. Both Bennett and Witten are blocking and the linebackers have recognized the fake. Too late, however, as Romo sets up to pass with the back of the end zone wide open. 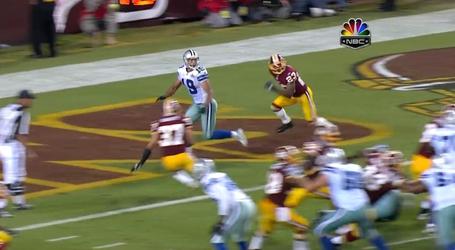 Reed Doughty is in a position no safety should ever be. Forward in the end zone, back to the play as he chases a receiver. Prior to this, as the play began, Miles Austin schooled DeAngelo Hall with a stutter to the outside before exploding across the formation on a slant. Tony Romo had plenty of space in which to fire the ball. Touchdown, Cowboys.

This is another play that we'll definitely be seeing again, and not necessarily from this exact formation. But this is the perfect fake, when operating in tight space, in which to momentarily draw the defenders forward in order to open up space in the end zone. 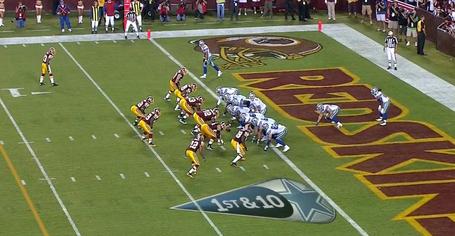 This was my favorite play of the game. Honest.

The Cowboys have been pinned back on their own 1, the crowd is fired up and going wild and the Redskins have all the momentum. We've seen the Cowboys struggle mightily while in this position before (the Barber mad scramble, Romo tipped INT) and here it certainly appeared the Cowboys were prepared to hand it off to Barber in order to try and get off their own end zone.

The Cowboys are in a "21" formation with Martellus Bennett covering up the right tackle and Chris Gronkowski and Barber lined up in a tradition "I" formation. This play screams power inside run and it's one that the Cowboys have run many times before. The Redskins stack the box with nine defenders, with Albert Haynesworth (#92) lined up over center. 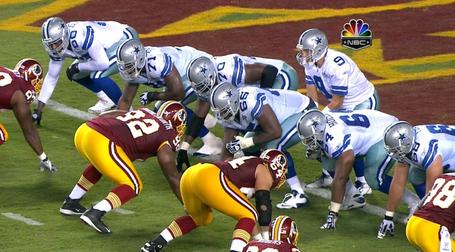 Here you can see how the interior defensive linemen are lined up against the Cowboys. Haynesworth is directly over center, something he's not used to and the right DE is offset to the gap between Free and Holland. The Redskins have overloaded to the right side of the offense where Bennett has lined up. 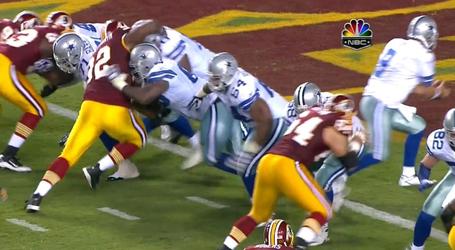 Immediately off the snap Haynesworth attempts to shoot the gap to Gurode's right. More than happy to oblige him, Gurode rides the nose tackle to the right side of the formation, allowing Holland to have a clear shot to the second level of the defense. Doug Free, meanwhile, shows off his speed and power by instantly getting inside leverage on Kedric Gholston (#94). All Jason Witten needs to do is occupy Brian Orakpo (off screen). 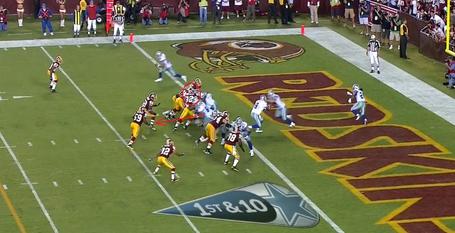 Back wide, we see the play start to develop. Haynesworth has been completely turned away from the play while Montrae Holland (arrow) has a lock on the linebacker. Romo instantly hands off to Gronkowski as Barber makes his move to his right, momentarily drawing the linebackers in his direction. 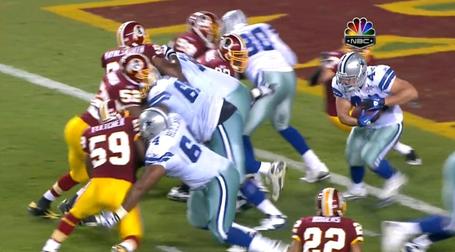 You can't look at this and tell me that the Dallas Cowboys don't have the ability to get push up front. 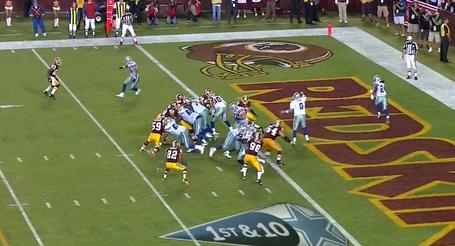 Wide view. Holland has leverage of Fletcher and cleared him out of the play. Four linemen have pushed five defenders off the line, while Free and Witten have two cleared out to the offense's left. Carlos Rogers is the lone defender in the hole and as we see....

Gronkowski isn't touched until he's five yards past the line of scrimmage. He powers through the tackle for a nine yard gain and the Cowboys start their march down the field. The Cowboys would ultimately stall on the drive, yet would pin the Redskins within their own 5-yard line, completely turning around the field position battle.

These are just three plays, only one of which had a significant effect on the outcome of the game. Yet all three showcased improvement by the Cowboys and Jason Garrett over season's past, when the play-action pass was rarely used and the fullback dive was seldom utilized. All three play calls were made at the perfect time against the right defense.

For all that Garrett may or may not have gotten wrong against the Redskins, he certainly got a lot right.