Share All sharing options for: Film Breakdown Extra: The Cerberus

Greek mythology speaks of a three-headed watchdog who guards the entrance to the lower world, Hades. It is a child of the giant Typhon and Echidna, a monstrous creature herself, being half woman and half snake. This creature is known as the Cerberus.

You asked for it, we've got it: A frame by frame breakdown of the fan favorite play from Sunday night's loss in Washington.

Ever since the Cowboys drafted Tashard Choice and Felix Jones in 2008 we've been waiting for the team to put all three on the field in a manner that truly takes advantage of the "Three Headed Monster".  The Cowboys busted out the Razorback formation last season with varying degrees of success, primarily with the goal of getting Tashard Choice on the field it seemed. As such, with Choice as the "lead" in this formation and the one making decisions, more often than not he kept the ball.

The Razorback was, and is, effective but is not exactly game-changing. Choice ripped off a 66-yard run against Oakland last season but for the most part this formation gains 4-5 yards a pop. Nothing to scoff at, that's for certain, but it could certainly be more dynamic.

Against Washington, the Cowboys unveiled a formation we're sure to see again. It's a variation of the Razorback that fans have dubbed the "Cerberus". Let's break it down, after the jump.

The Cowboys were on their way to scoring the lone touchdown of the game, and this play came after Tony Romo and Dez Bryant had hooked up for a first down off a nice pass and catch. The Cowboys had already used the Razorback in the game with moderate success.

Once again, all descriptions refer to the photo above the text, unless otherwise noted. Click on the photo for a larger, hi-res version.

The Cowboys take the field in what first appears to be a "21" formation with Jason Witten covering up the right tackle and two RB's in the backfield. In reality, the Cowboys have all three running backs on the field. Tashard Choice is lined up in the offset FB position, Barber at tailback and Felix Jones split wide. The Redskins are in their base 3-4, with LaRon Landry once more playing close to the box. 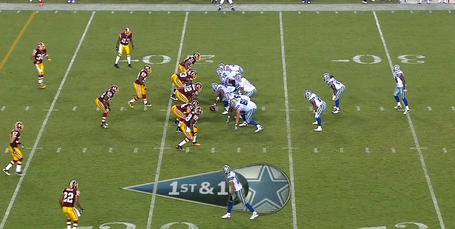 Felix Jones goes in motion, sprinting to take his spot behind directly behind Barber. You'll notice Reed Doughty has snuck down closer to the play while Landry takes a few steps back in anticipation of some sort of trick play. The two linebackers begin to inch forward to prepare for a run.

Felix Jones is barely in his position before Romo snaps the ball. He goes in motion and as he turns behind Barber, he is literally bouncing in his spot. 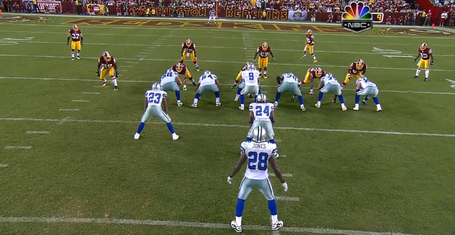 Here's a great view of the formation, just before the snap of the ball. The beauty of this formation is that any number of plays can come from this. A toss to the left to Felix with Choice and Barber (both tremendous blockers) leading the most dynamic runner on the team; perhaps a "fullback dive" directly to Barber. It's an extremely versatile formation and the play the Cowboys ran was just about perfect. Continuing on.... 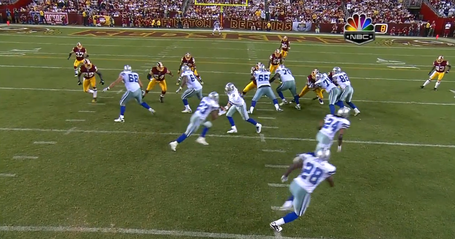 At the snap of the ball, Romo hands off to Choice as Barber and Felix move to their right. Notice the offensive line is crashing left with Witten cracking down on the right OLB. This leaves Carlos Rogers (#23) as the lone defender holding containment on the right. London Fletcher is unblocked and is hiding just behind the defensive line. 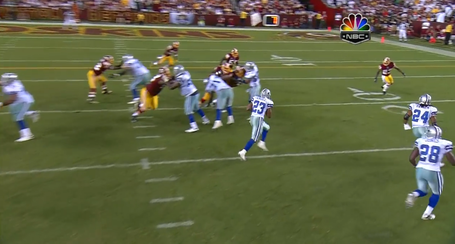 This is the key moment in the entire play. We know this was a true option play; either Choice keeps the ball or pitches back to Jones and this is the moment he has to decide. Currently there is just one defender (that he can see) that has containment on the far right. He has yet to be challenged and still has five yards between himself and any defender. This usually calls for the runner to not risk the pitch and to keep the ball. That is what Choice does. 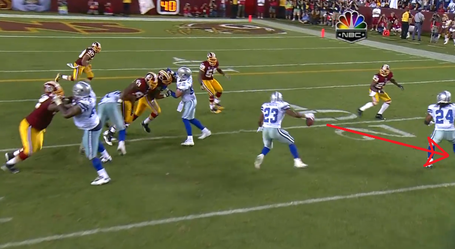 Here you see Choice completely freeze Rogers with a fake toss (notice Rogers has turned his hips back to the outside). Unfortunately, this is the moment that London Fletcher comes clear of the blockers. This is still, technically, the right decision; he has the inside edge on Rogers and just one defender to beat. Fletcher makes the mistake of slowing his feet as Choice employs the fake; Witten appears to have sealed off the edge but in reality has lost control of Alexander.

You also can see how far Choice would have to toss the ball to Felix. In retrospect, it's likely a good extrapolation that if the toss were pulled off successfully Jones might have had a clear track to the end zone. Barber was in perfect position to block out Rogers and the speedy Landry would have been all that stood between Jones and the end zone. Yet Choice made the safe, correct decision.

Wide view. You can see the same moment of the play as Choice makes the fake toss and how far back Jones was. This isn't an abnormal distance for a toss, but considering that Choice was unchallenged this was the safer decision. 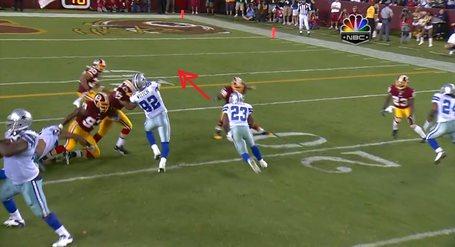 Choice freezes Fletcher with hip wiggle and attempts to shoot inside of the linebacker just as Witten loses control of Alexander. If Witten had maintained the block, Choice would likely have had better gain.

Same moment, wide shot. Choice moves inside of Fletcher while Landry begins to close on the play. Unfortunately, Alexander has broken free of Witten and while Choice has successfully faked Fletcher out, Alexander is able to slow Choice enough to allow Landry to make the play.

It's a six-yard gain; definitely a success. The toss to Jones would have been intriguing to see how it played out yet you can't fault Choice for the decision he made.

My favorite moment: Fletcher standing there flat footed after being faked out of his shoes by Choice.

Conclusion: This is a very dangerous formation and one the Cowboys pulled off to near perfection. The variables that could come from this play are numerous and Cowboys fans have a right to want to see more. Now, defenses have another play and formation to keep an eye on.

What's best about this: Tony Romo was under center. I'm not a big fan of the Razorback as it takes Romo out of the equation. This formation puts the ball in Romo's hands. Go back over that play again and watch the safeties. Now imagine a play action fake and a bullet of a pass that's thrown to Miles Austin, who has streaked across the area vacated by the safeties who have bitten on the fake run.

The Cerberus. I love this formation.