Staring Into A Cracked Crystal Ball: For The Cowboys "It's time to step up"

Share All sharing options for: Staring Into A Cracked Crystal Ball: For The Cowboys "It's time to step up"

By now, you've read all about 0-2 starts, when the last one was for the Cowboys, how many they had and how often the Cowboys made the playoffs after a 0-2 start. I'm not going there today.

By now, unless you've held your hands over your ears, closed your eyes and shouted 'la la la la la la' at the top of your voice since yesterday, you'll have read all about who's to blame for the bad start: The QB, the team, the coaches, the owner, heck, even the fans are being blamed in some quarters. I'm not going there either.

By now, you may be growing tired of the misused idioms floating around: 'Big hat, no cattle', 'All bark and no bite' or 'Where there's smoke there's fire'. I'll spare you some more.

It's also pretty clear that things are not running smoothly for the Cowboys. But what could this mean for the season if the 'Boys don't get it fixed quickly?

Some time in the early 80's, the godfather of baseball stats, Bill James, realized that there is a stable relationship between a baseball team's run differential and the number of games it wins. He surmised that a team's true strength could be measured more accurately by looking at runs scored and runs allowed, rather than by looking at wins and losses.

To be more precise, he found that he could predict future win/loss records more accurately by using only past runs scored and runs allowed than by using only past wins and losses. Because the equation he came up with looked a bit like the geometrical formula for computing the hypotenuse of a right triangle, he aptly named the equation the Pythagorean Formula. Here is his original equation:

Some time later, Daryl Morey (then a statistician for STATS, Inc., since 2007 General Manager of the Houston Rockets) found that the Pythagorean Formula applies not just to baseball, but to just about any sport that keeps track of points scored and allowed. It was simply a matter of tweaking the exponent to the sport in question. For the NFL, he proposed an exponent of 2.37 instead of 2. While there have been countless 'improved' versions of the exponent proposed since, the 2.37 remains the exponent most commonly used (by Football Outsiders for example). This is the NFL version of the formula:

Today, we'll use the Pythagorean Formula to project how many wins we can expect for each NFL team this season based on the results of the first two games.

The more statistically adept among us will scoff at the notion of calculating Pythagorean Wins after only two games (hence the 'Cracked' Crystal Ball in the title). But I think it's still a worthwhile exercise, as the first two Cowboys games do reflect an accurate snapshot of where the team currently stands. But before we do that, let's look at the four teams in the NFC East and how their Pythagorean Wins developed week by week last season: 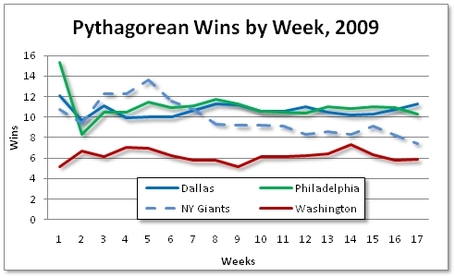 Notice how the Pythagorean Formula last year was already projecting both the Cowboys and Eagles for a 10-11 win season from week three onwards. The Giants, after a strong start, began oscillating around the 8-9 win mark from about week eight and didn't move much after that. The Redskins never strayed far from the six win mark. The fact that they only managed four wins last year suggests that the Redskins were 'unlucky' last year.

The point here is that barring a meltdown like the Giants had last season, or a surge later in the season, a couple of weeks worth of data can provide an early indication of where the train might be headed.

In two games so far this season, the Cowboys have scored 27 points and allowed 40. The Pythagorean Projected Wins for this stat line: 4.5 wins.

I'm not suggesting that the Cowboys will actually end up with four to five wins this season, but with the way they've played so far, they could very well end up there.

"I think we're at the crossroads right now," coach Wade Phillips said. "It's time to step up."

"We have to do things better, and we have to figure it out in a hurry," said Romo.

Let's hope they get it done. Real soon.