Behind The Scenes At BTB

Share All sharing options for: Behind The Scenes At BTB

[Ed note: The following is a collaboration between Aaron and O.C.C. Since it's a holiday, I thought it would be a good time for something lighter, a little comedy to start your day. Enjoy! - Dave]

In a joint task force, the Office for Cyber Craziness and the Agency Against Repeated Online Nonsense have investigated some of the mysterious going-ons at BTB.

Their investigations have shed light on some of the exclusive code-talking at BTB as well as the covert identities of some Cowboys players. They also uncovered the activities of a secretive organization on the blog, discovered a method behind the madness that are the BTB comments, and found that fanposts on the blog follow a reliable and predictable pattern.

Their full report after the break.

The Office for Cyber Craziness and the Agency Against Repeated Online Nonsense have initialized an investigation into the nature of BTB member discourse. All commentary is expected to assume a didactic role between members. This role is confirmed once each member crosses the threshold between "lurker" and "commenter". The purpose of this report is to analyze the exclusivity of member commentary in an attempt to crack the code language in which members often communicate, also known as BTBisms.

Subject Lines - Prior to creating a message, members often begin responses to one another in the Subject Line. This line provides a defaulted bold font that helps to distinguish different members’ voices, follow-up messages, topic changes, etc.

Agreements – Other than maintaining respect for English grammar and sentence structure, members often instead assign numbers preceded by a "+" sign to indicate agreement. In many cases, this message begins with a "+1". If another member agrees with the two messages above it, they may indicate a "+2"; a third, a "+3"; a fourth, a "+4"; and so on. More emphatic agreements often add an inordinate amount of zeroes and in doing so, completely ignore appropriate comma placement (i.e. "+100000000000000000"). When discussing a certain player, members sometimes choose the respective player’s jersey number to represent their level of Agreement. More recently, the word "this" or the symbol "^" seem to have been fashioned in this very same manner—most likely in an attempt to continue developing BTB code.

Disagreements – Members also assign numbers when disagreeing with preceding post(s), except they indicate differences of opinion with the "-" sign. This follows the same pattern as the Agreements (-1, -2, -3, -4, etc.). Disagreeing subject lines, though, are more likely to contain a linguistically patterned rebuttal. As of the date of this report, it is not yet known whether subject lines containing sarcasm include any underlying code.

No Subject Lines Used – Although this is a rare occurrence, such posts are subject to immediate analysis as members could be consciously avoiding the use of the Subject Line’s bold font. Evidence of .jpg and .gif use has been found to populate such posts.

Firsts – All new material posted on BTB is subject to being "firsted" by its own members once one initializes discussion on a new article. This practice has been seen more frequently on the Main Page, but has also spread to the FanPosts. No evidence of it affecting the FanShots section is available at this time. "Firsting" has been a controversial action between members in the past; although, the fervor surrounding its use has dwindled during the offseason. We will continue to monitor "firsts" not only in the Subject Lines, but also in the Message Box as well. Warning: During the regular season, a "first" may be followed by a "second" from a second member, a "third" by a third member, and so on. Such messages have pushed the Message Box’s maximum capacity to the far right, drawing the ire of some members, while creating laughable anxiety in others.

LOLs – Our analysts have confirmed that "LOLs" are the typographical representations of members receiving and accepting humor. "LOLs" come in many variations, including "LMAO", "LMFAO", "ROTFL", "HAHA", and the use of capitalization techniques also vary.

Note: The South American equivalent, "ja, ja, ja" or "je, je, je", has yet to make its BTB appearance, at least since this report’s publication. Also, some "LOLs" have initiated disagreeable or even sarcastic messages directed at preceding posters; therefore, making it difficult for this report to define the generalities of BTB humor at this time.

OTs or Off-Topics – Sometimes referred to as "brain farts" outside of the blogosphere, these messages convey a desire to re-direct member discussion within an article’s commentary. Often, a brief apology is asserted followed by the attempt at new discourse. OTs may be caused by breaking news reports, supplemental subject matters, or just as a personal preference by the message’s author. Statistics on the welcoming or neglecting of OTs by members are not yet available, but this report defines them as messages that offer topics contrary to those mentioned in the article or FanPost. They differ in degree of subjectivity in that they are completely ignored or create a new enthusiasm within a "stale" Comment Thread.

You say tomato, I say tomahto

Mark Twain allegedly once said "I don’t give a damn for a man that can only spell a word one way." Well, looks like Mark would have felt right at home on BTB. Now we don’t want to be those guys who constantly carp about typos and spelling mistakes, but when it comes to spelling Dallas Cowboys player names, one should reasonably be able to expect that we would get those names right. Wrong. The table below shows which players have been misspelled the most in the comments section of BTB.

Oh, and Keith Brooking (not the mysterious player some people refer to as Keith Brookings) is not on the list because our search function is unable to distinguish between Brooking and Brookings.

The word that must not be spoken

The SB Nation machine on which BTB runs tracks the hits the site gets each day via the major search engines. We then get a nice aggregated list of what people were searching for when they visited our site. For the most part, these search words are Cowboys related.

But one of the items is a different kind of ‘hit’ and has been popping up in the top three quite often recently. Look at the table below and tell us what you see in the number three spot. No, better yet, don’t tell us. And don’t type it anywhere. Who knows what search engine bots are on the loose out there, and to which powerful yet secretive organization they belong. You do not want to antagonize them. Trust no one. Mulder out. 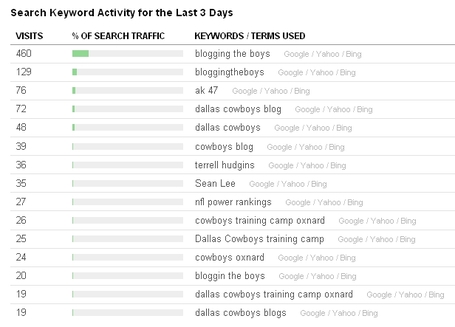 For the newbies: a preview of what’ll happen on BTB at some point in the regular season.

After a tough Sunday loss – which is basically any game where the Cowboys don’t win by 20+ points - four types of posts regularly appear on BTB in the following order:

Monday/Tuesday: "Time For [insert any player 3rd or lower on the depth chart] To Start".

Tuesday/Wednesday: "My Thoughts On What Went Wrong Against The [insert opponent’s name here]", often struggling to meet the 75 word minimum. In it’s long form this type of post is often headlined "Why I Give Up".

Wednesday-Saturday: "Why Everything’s Going To Be Fine" frequently featuring a plethora of stats to make a point.

Often, these posts will feature lengthy threads about what constitutes a "real fan". What’s revealing is that this pattern follows the well-established cycle of grieving after the initial Shock (vented in the open game threads): Anger – Bargaining – Depression – Acceptance. Mind you, there’s nothing wrong with those posts, they are a natural process of coping. After all, isn’t it nicer to grieve or celebrate together than all by your lonesome?

To conclude this section of our report, the Office for Cyber Craziness and the Agency Against Repeated Online Nonsense has found that the balance between Forced Objectivity and Delivered Subjectivity is the most active part of the BTB community. Members strive to inform, express, and persuade each other using both advanced Internet research skills and their passion for the Dallas Cowboys to complement their own opinions.

During debates, members seek to find each other’s arguments as fallacious when agreement cannot be met. Debates can begin with one initial conflict in opinion and will end on their own respective volition. This occurs when one or both members lose interest, a new debate has distracted the entirety of their passion, or once the practical aspects of the squeezed-to-the-right Comment Box can no longer contain an aesthetically pleasing message. Such squeezed-to-the-right debates do well in enticing more members into the argument, but it is not yet certain whether they attract or dissuade lurkers.

Commentary on BTB is said to be some of the most knowledgeable in the blogosphere regarding the Dallas Cowboys and football, in general. While doing this report, however, evidence of community has also been detected. Light-hearted humor, general greetings, and discussion of fictional and non-fictional personal business also run rampant throughout BTB Comment Boards.

During this 2010 season, the Office for Cyber Craziness and the Agency Against Repeated Online Nonsense will further analyze mysterious BTB going-ons, such as "troll-bashing", "Z-scrolling", the "only-Open-Thread commenters", along with any aspects of the psychological toll shared by a community that blogs about the Dallas Cowboys.